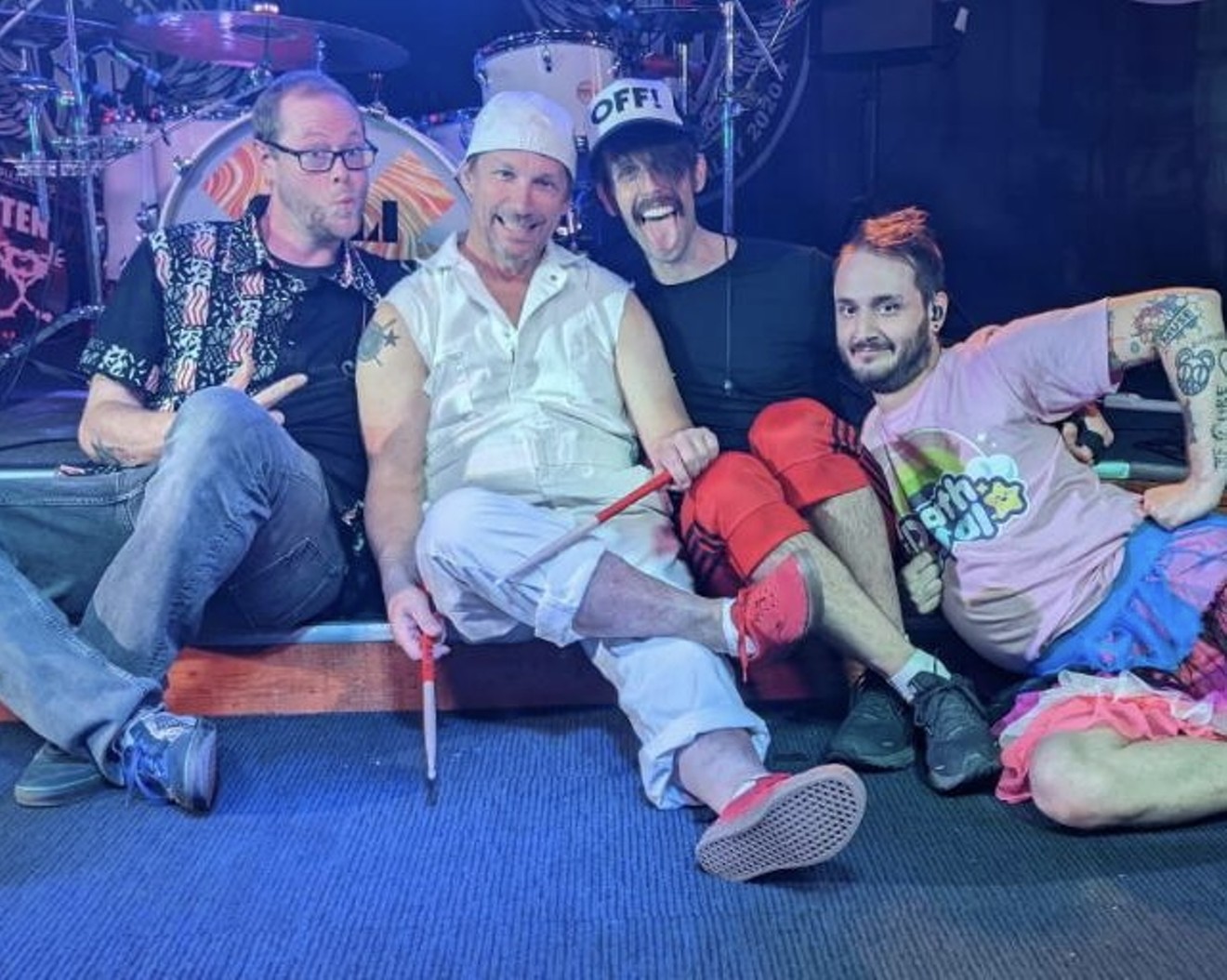 Left to Right: Ethan Goss, Swede Grooms, Evan Merida, Will Roland Courtesy Chili Powder
When Denver Red Hot Chili Peppers tribute band Chili Powder was asked to play at the Summer Brew Fest, the bandmates were hesitant. The gig is tomorrow from 1 to 4 p.m., giving the four friends just a few hours to break down and make their way to Empower Field, where the real Red Hot Chili Peppers will play tomorrow night.

But they each had a thought: What if RHCP caught wind of their show and actually showed up? Whether the fantasy will become reality is TBD, but regardless, this is their favorite weekend since RHCP last came to Denver in 2017.

"The opportunity to be just three minutes' walking distance from where they will be playing and doing a show that same day is really the ultimate tribute experience," Merida says. "It's really an honor to do that. And of course, it goes without saying, we have a dream that perhaps [through] all of our efforts to get the word out, we'll somehow get through to the guys and we'll get the opportunity to meet them in person. Either their show or ours, whatever. That would just be amazing."

From the top: Swede Grooms, Ethan Goss, Will Roland, Evan Merida
Courtesy of Chili Powder
RHCP has indelibly impacted each of the Chili Powder players' lives. Bassist Will Roland says he wouldn't have picked up the instrument if it weren't for Flea. Roland and guitarist Ethan Goss have been covering RHCP songs in each other's respective basements since high school. And drummer Swede Grooms, who grew up in L.A. in the ’70s, has been seeing the band live since he was a teenager.

"What I really love about RHCP is how they evolve with every album, and they're gonna release supposedly another at the end of this year, so I look forward to that, as well," Grooms gushes. "I feel that the band has been one of the best groups at being able to pull together and synthesize all different genres of music. They have it all. Their innovation has definitely influenced a lot of other musicians, including people who do tribute bands like us — but a lot of mainstream music certainly comes from the influence of these guys."

Goss says Chili Powder's set list will include classic RHCP songs as well as newer ones.

"We're playing everything from 'Aeroplane' to even some of their covers, like 'Love Rollercoaster' and 'Higher Ground,' which is a Stevie Wonder cover," he says. "So that's just kind of fun to do a cover as a cover band. A whole variety of movement from just about every album."

And what would they do if even just one RHCP member came to the show? "Oh, fangirl, for sure," says Roland. "I'd definitely want to thank them."

"I was going to say thanking them, for sure — not that they don't hear it enough," adds Goss. "They've brought a lot to our lives, just in general, so much happiness and so much fun. And it gives me something to look forward to, just because of them, which is really awesome."

Chili Powder plays Summer Brew Fest, Mile High Station, 2027 West Colfax Avenue, 1-4 p.m. Saturday, July 23; tickets are $55.
KEEP WESTWORD FREE... Since we started Westword, it has been defined as the free, independent voice of Denver, and we'd like to keep it that way. With local media under siege, it's more important than ever for us to rally support behind funding our local journalism. You can help by participating in our "I Support" program, allowing us to keep offering readers access to our incisive coverage of local news, food and culture with no paywalls.
Make a one-time donation today for as little as $1.
Emily Ferguson is Westword's Culture Editor, covering Denver's flourishing arts and music scene. Before landing this position, she worked as an editor at local and national political publications and held some odd jobs suited to her odd personality, including selling grilled cheese sandwiches at music festivals and performing with fire. Emily also writes on the arts for the Wall Street Journal and is an oil painter in her free time.
Contact: Emily Ferguson