Remembering Aaron Carter: A Look Back at His 2002 Westword Interview 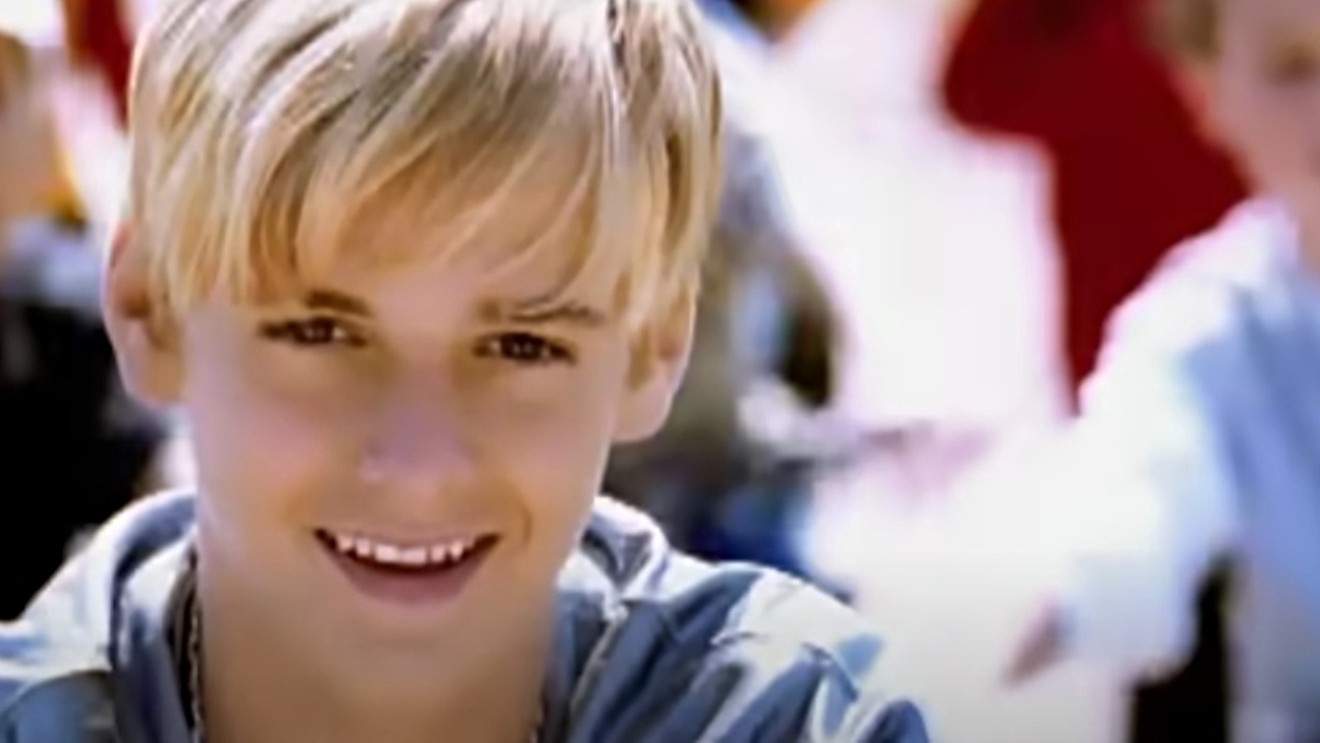 Aaron Carter as seen in the video for "Oh Aaron." YouTube
Child stars often wind up trapped in the amber of nostalgia — particularly those whose adult fame doesn't match the acclaim they collected as a kid. To the fans who adored them in their own lost youth, they remain forever unchanged. But that can be more of a burden than a blessing for former juvenile celebrities who commit the ultimate career sin: growing up.

Aaron Carter, 34, who was found dead in the bathtub of his California home on November 5, represents an extremely sad example of this phenomenon.

Carter first opened for the Backstreet Boys, which included his older brother Nick, at age nine. And before long, he was a bona fide sensation, thanks to albums such as 2000's Aaron's Party (Come and Get It) and 2001's Oh Aaron, which he supported with a megatour that stopped in Denver early the next year.

Prior to the gig, in February 2002, I interviewed Carter for Westword for two very important reasons: My then-eight-year-old twin daughters, Ellie and Lora, who absolutely adored him. He was fourteen at the time, and he couldn't have been kinder or more accommodating. I asked if he would say hello to my progeny by name so I could play them the recording that evening, and he happily complied. Somewhere, I've got a cassette with him exclaiming, "Hi, Ellie! Hi, Lora!"

But reading the resulting transcript today is a bittersweet experience, given the turn his life took when the spotlight dimmed: arrests, substance abuse and mental health struggles and more. At one point in the conversation, he said he'd avoid the type of legal trouble that had ensnared Nick by "not making myself too obvious," and while he didn't pledge never to curse when he rapped in the future, he stressed, "I wouldn't ever want to be a bad influence."

Still, the exuberance and innocence that made Carter so appealing continues to reverberate two decades later. His words are a nice way to remember him on such a sad day.

The complete Q&A is below, following the video for "Aaron's Party."
"The Junior Bomb"
February 7, 2002

Westword: My daughters inform me that one of the magazines they read called you "the hottest boy alive."

Aaron Carter: Whoa! I hadn't heard about that.

I don't know. It's kinda weird, you know?

My daughters are eight, and I know a lot of your biggest fans are around that age. But are some of them your age or older?

Yeah, I've got a lot of older fans. Sixteen, seventeen. And some grownups, too.

Is it strange to have so many little kids in love with you? Do you like it better when it's the sixteen-year-olds?

No, it doesn't matter, because they're all the same, really. They all scream just as loud!

When you're in concert and the fans are screaming, is it sometimes hard to concentrate on performing?

Do you understand why they scream that way?

Sometimes I don't understand — I don't know why. But I guess they just scream because they love me. Like for me, if I was to see Steve Perry, I'd scream my butt off.

You're a Journey fan?

Have you ever met Steve Perry?

No, but I talked to him once on the phone. He's a nice guy. He and David Foster — they wrote "I Stand Alone" for Quest for Camelot — are writing a song for me right now. Which is so cool, because he's the reason I wanted to become a singer.

Was there one of his songs that really connected with you?

Yeah, "Wheel in the Sky." That's my favorite one. My dad used to listen to it; he used to jam to that song in his Camaro.

In the past, you've talked about wanting to be a marine biologist someday. Are you still interested in that?

Definitely. When I get a little older, when I'm twenty or something, I'm gonna go to college for it.

Does that mean you can imagine a time when you're not a performer?

I'm not gonna do marine biology for a while — and I'm just gonna do it for a while and see what it's like. But I'm never gonna stop singing.

Still, if you were a marine biologist, you wouldn't be recognized everywhere you go. Or do you like it when kids recognize you?

It's cool with me. It's never been a problem, and it's my life. I've got to get used to it.

It's been pretty much your whole life, hasn't it? Can you remember a time when you weren't famous?

Oh, yeah. I can remember back to when I was little and I wanted so bad to become a superstar and stuff. And before that, when I was, like, five, I wanted to be Peter Pan! [Laughs]

I've read that your brother Nick thinks being famous is the reason he was arrested a few weeks ago. Did what happened seem unfair to you?

Very unfair, very unfair. I talked to my brother, and they just did it because he's Nick Carter. But it's okay; everything's great now, and he's recording for his new album.

There's always the chance that something like that could happen to you one day just because you're Aaron Carter. Does that worry you at all?

Yeah, you know, sometimes I get a little worried about it. But I'll just be careful — not make myself too obvious.

You always look so perfect in your photographs. Does that take a lot of work, or does it come naturally to you?

I just like to be natural. I don't like being fake. I hate makeup — I really hate makeup. One time we had a show, and they put makeup on me, and this lady was like [falsetto], "Don't you take that makeup off! You leave that makeup on! Your face has to reflect!" And I'm like, "Whatever," and then I went straight to the bathroom and washed all the makeup off.

I know that when I was fourteen, I had zits, but I've never seen a picture of you with zits. Do you ever get them?

Every once in a while. But I'm pretty good about that.

When you get one, do people like that makeup lady go into a panic?

No. [Giggles] I just wash my face until it's gone.

How about your clothes? Do you get to pick out what you wear for concerts?

Someone usually chooses what I wear. But when I dress in my own style, kinda casual, I pick those out. I don't like to look like, "Look at me! I'm shiny!"

Are there ever times when somebody tells you, "Wear this," and you say, "That's not me"?

That's happened before. One time they tried to put me in stockings and some really tight shirt, and I said, "I'm not wearing that! I look like a little flirty girl in that!"

Actually, it sounds like something Peter Pan would wear.

Are you working on a new album?

Yeah, we just started a couple weeks ago. We've already finished one song that's kind of like "I'm All About You" [from Oh Aaron].

Are you trying to do things a little differently this time around? Or will it be an extension of things you've done in the past?

It's gonna be an extension, definitely. We're gonna put in a lot of cool things, like the interludes we did on the Aaron's Party album, and hidden tracks, too. My songs are gonna change a little bit, because my fans are getting older, and I'm getting older, you know? But I'm not gonna do something dramatic, like Britney Spears going from "Oops!...I Did It Again" to "I'm a Slave."

So you're not going to wear a big snake around your shoulders?

Did you get a say about the songs for the new album?

In the past, your songs have been played a lot on radio stations for kids, like Radio Disney, but not as much on other stations — even the ones that play groups like the Backstreet Boys. Why do you think that is?

Probably because my music is a little different from what they're used to. But it'll never change. I've done good in the background, so if they don't want me, that's fine.

There's a lot of rapping on your Oh Aaron CD. Who's your favorite rapper right now?

There are some really good ones. Ja Rule is really good, even though they play his new song too much. [Laughs]

Can you imagine some day rapping in more street-oriented language like he uses? Or is that not really your thing?

I don't know. We'll just have to see what kind of style I end up with in the future. But I wouldn't ever want to be a bad influence.

I actually like them both the same; I like putting them together to make them into something new. But singing is what I started off doing, and I don't want to end it with rapping. Good things must come to an end, so I'll end it singing.

Do you get an allowance?

Yeah, my parents give me an allowance. I'm a hardworking kid. When I'm home, I like to work in the yard and fix things. I'm always doing stuff like that.

So your allowance isn't just for performing, but for mowing the lawn?

What other household chores do you have?

Well, if I don't clean up my room, I get in big trouble.

Are you allowed to spend your allowance on anything you want?

Sometimes I have limits, but most of the time, I can buy whatever I want.

What's the one thing you'd like to buy that you don't have yet? A car, maybe?

Is that the kind of Camaro your father had? The one you used to listen to "Wheel in the Sky" in?

Yeah, that's the one.

Are you looking forward to the day when you can just slip behind the wheel and drive wherever you want?

Oh, yeah. I can't wait.
KEEP WESTWORD FREE... Since we started Westword, it has been defined as the free, independent voice of Denver, and we'd like to keep it that way. With local media under siege, it's more important than ever for us to rally support behind funding our local journalism. You can help by participating in our "I Support" program, allowing us to keep offering readers access to our incisive coverage of local news, food and culture with no paywalls.
Make a one-time donation today for as little as $1.