Bassist Paul Warburton (right) and guitarist Dale Bruning. Tom Burns
Bassist Paul Warburton, a longtime fixture of Denver’s jazz scene who worked with numerous jazz legends passing through Colorado, died on Wednesday, January 5, at the age of 79. Guitarist Dale Bruning, who spent a decade performing as a duo with Warburton, says that the bassist had chronic obstructive pulmonary disease and had contracted COVID earlier this week.

Warburton told Westword in 1997 that at the age of fourteen, before he started playing bass, he’d lay on his bed, covered with an old chenille blanket with fringe, and listen to late-night jazz shows on the radio.

"And when I'd hear a bass line that I wanted to play, I'd hold one end of the fringe between my teeth, and then I'd tighten it and loosen it and pluck on it until I actually learned to walk a bass line along with the radio,” Warburton told Westword. “It was really amazing: I was actually able to walk a line with the damn fringe — or at least I thought it was a line. If I heard today what I was doing back then, I'd probably be laughing my butt off."

Warburton, who was born in Denver in 1942, taught himself to play bass by copying Red Mitchell and Ray Brown solos from their albums. Bruning says Warburton and Mitchell eventually became friends.

"The thing about Paul I was always impressed with was that he played very solid bass lines, that's for sure," Bruning says. "He was an excellent soloist on bass, and that's why his main man was Red Mitchell, as he could play beautiful solos on the bass.

That technique just came naturally to him. Warburton told Westword that he took one bass lesson, but it really slowed him down.

"When I was a kid, we were very poor, so I learned to play the bass by sneaking my half-brother's bass out when he left it at our house," Warburton said. "And I learned my correct hand positions by spending hours flipping through records in the store bins, looking for pictures of bass players so I could see the different ways they held their hands.

"Years later, I realized that I had this innate talent for this particular instrument, and music in general. Technical things that other bassists have to train themselves to think about doing just came naturally to me. I didn't really know that I was using a lot of accepted classical techniques," he continued. "It was just comfortable to me, so I did it."

While attending East High School, Warburton started playing professionally at seventeen, working with house bands around Denver and later backing up legendary players like Milt Jackson when they came to town. He and Bruning released their duo album, Our Delight!, on local jazz label Capri Records in 1987. In the liner notes of Our Delight!, Warburton credits a month-long stint in California with pianist Bill Evans and Philly Joe Jones with “totally changing my harmonic conception and musical approach.” 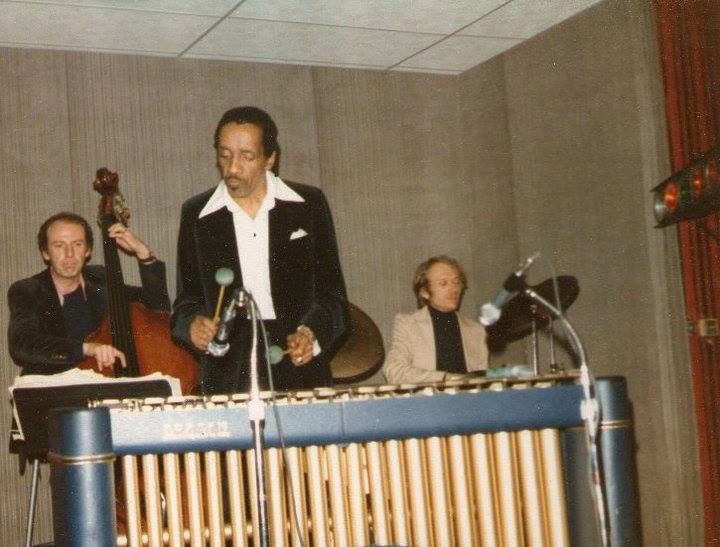 Paul Warburton with vibraphonist Milt Jackson and drummer Mike Whited at Clyde's Pure Jazz Club in Wheat Ridge circa 1979.
Facebook
Bruning says that Evans was Warburton's favorite musician of all time, and playing with the pianist was a thrill for him. Bruning adds that Warburton was disappointed that Evans didn't choose him to be his regular bassist.

"Bill just thanked him for playing with him," Bruning says. "And then Paul went back home to Denver, but he never heard from Bill again, and that's why it was disappointing."

Bruning says that over the years, he and Warburton backed up many vocalists, who would sometimes forget lyrics in the middle of songs.

"If Paul heard that happening, he would whisper out those lyrics to the singer," Bruning says. "If you played any of the standards, he knew the lyrics to those tunes."

On Warburton’s Facebook page, there’s a photo of him with the legendary bassist Milt Hinton, who was nicknamed “The Judge.”

“It was taken during a Dick Gibson jazz party in the mid-1980s at the Fairmont hotel in Denver,” Warburton wrote. “Milt was called ‘The Judge’ for a specific reason: After hearing you play, he would sentence you to x-amounts of days in jail. In other words, the better you played, the more days you had to spend in the joint. He gave me ten days, and I'm curious about other bassist friends of mine on Facebook who suffered similar consequences of their ability on our instrument from ‘The Judge.'"

Warburton recorded with Pete Christlieb, Bobbi Norris, Joe Bonner, Richie Cole, Cal Tjader and Dick Hindeman, and worked with Stan Getz and Pharoah Sanders. Warburton also released his solo album, Speak Low, in 1997, which featured an all-star lineup of Denver players, including trumpeter Ron Miles, pianist Eric Gunnison and drummer Nat Yarbrough. Warburton and many other Denver jazz musicians can also be seen in the 1996 film Almost Blue, which was shot in Denver and stars Michael Madsen and Garrett Morris

In the late ’90s, Warburton and local woodworker and jazz lover Bob Ross went into business making their own basses that catered to jazz and classical bassists.

Warburton told Westword that with regard to playing, at one time he fed off the ego thing a bit, like anybody would.

“But that gets you in trouble,” Warburton said. “Once the ego starts trying to take care of business, you kind of lose the music. So I try to look at my playing for what it is. There's a lot that I can't do, but I don't get uptight anymore about not being able to do some things. I've learned to enjoy the talent that I do have and to try to use it to communicate with people through music. And that's really as far as it goes.”
KEEP WESTWORD FREE... Since we started Westword, it has been defined as the free, independent voice of Denver, and we'd like to keep it that way. With local media under siege, it's more important than ever for us to rally support behind funding our local journalism. You can help by participating in our "I Support" program, allowing us to keep offering readers access to our incisive coverage of local news, food and culture with no paywalls.
Make a one-time donation today for as little as $1.