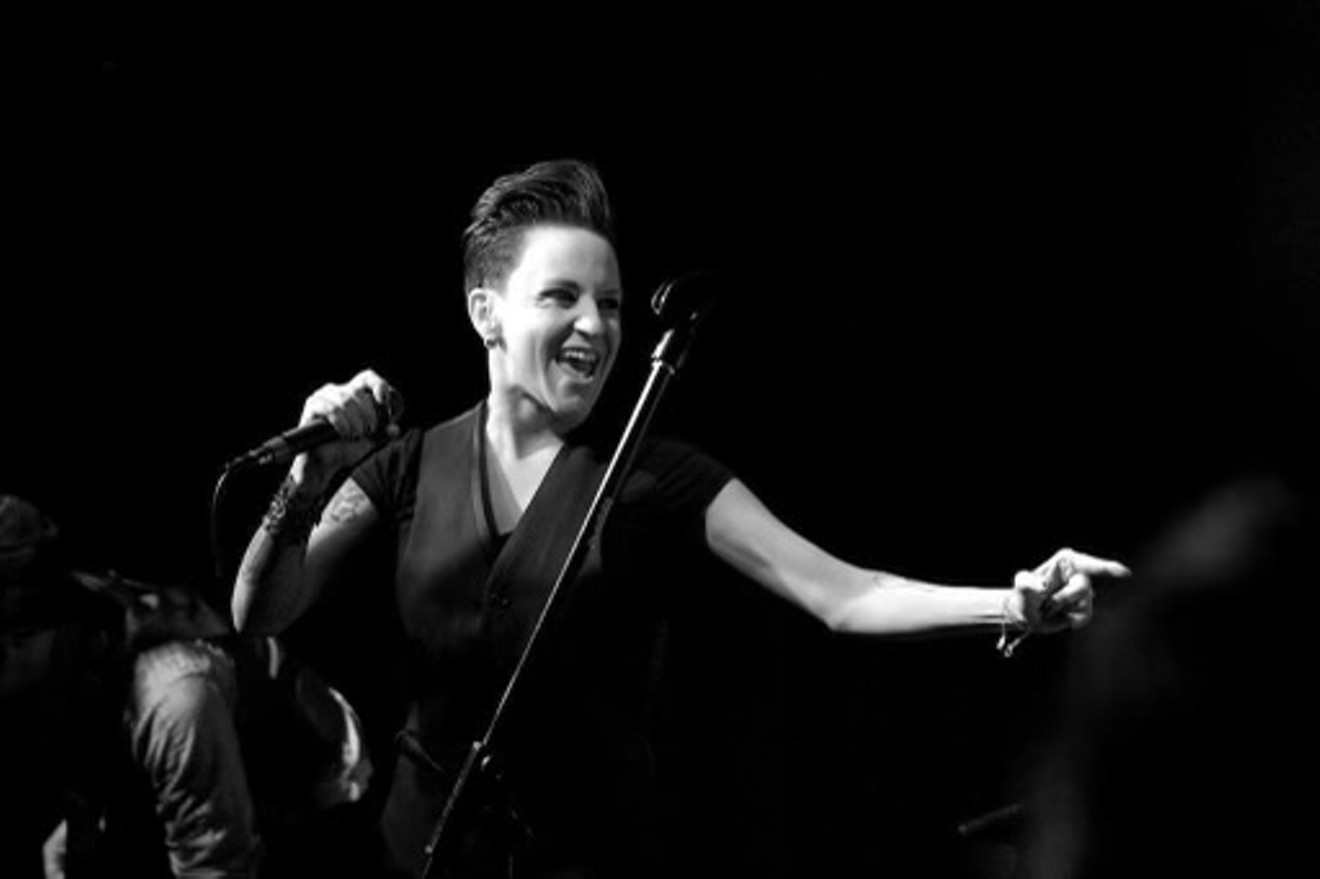 Kyle Simmons Courtesy of the Simmons family
“We Kyle girls gotta stick together” is how Kyle Simmons introduced herself when she friended me on Facebook, but she seemed surprised that I already knew who she was: lead vocalist, songwriter and rhythm guitarist for the long-defunct Girl Named Kyle, followed by the same creative work for the band Speakeasy Tiger and more recently, The Sound and Color.

I never got to meet the other girl named Kyle in person, but was lucky enough to see her on stage a couple of times – once opening for Northern State at Moe’s Original Bar B Que in Englewood in 2008, another when she had reconnected with Speakeasy Tiger in 2013 to play the Marquis Theater. I’d always been enamored of her strong, energetic vocals, which Michael Roberts called “warm, round tones” in these pages.

But sadly, there will be no more in-person chances to experience Simmons’s signature head pump, punctuated by a shock of hair that was sometimes auburn and sometimes blond. Simmons died of end-stage liver failure on Saturday, October 22, at the age of 34, surrounded by her immediate family and longtime friends.

“About a year ago, we knew that something was really wrong,” says one of her two older sisters, Jamie Smith, who along with their other sister, Lynde Simmons, arrived at the hospice from their homes in Arizona just in time on Saturday to say goodbye. “She had been hospitalized with hepatitis of the liver and was told, ‘You have to stop drinking,’ and she planned on it. She really did. But it was an addiction, and it just takes over your life. I think it really dulled her creativity, too, and that really upset her, because her music was everything to her.”

Kyle Simmons was born and raised in Colorado, graduating from Arapahoe High School in 2006. Friends and family say she was always a force, and always loved making music, even if it was just pounding out a beat with her fists on the kitchen counter. More recently, she had been working on music for her new project, The Sound and Color, and working part-time jobs, including in the box office at the Clocktower Cabaret and as a runner at Live Nation.

In addition to her sisters, she’s survived by her parents, Denise and Terry Simmons, who live in Centennial.

“This is a person who was so loved,” Smith says, adding that their parents have been married for 43 years and raised them to be practicing Christians. “But she was always very brave, even when things weren’t great. We would ask her how she was doing, and she would just say, 'I'm fine, I'm fine.' But she wasn't.”

The family is adamant that Simmons’s story be shared publicly, so that her death can inspire more open conversations about alcoholism and other addictions, particularly in the music world.

“I think addiction lives in the shadows,” Smith says. “Her doctor wasn’t even surprised at all at how young she was, that she had cirrhosis of the liver already and would need a liver transplant to survive. He told our dad that this is an epidemic now among young people, and that the statistics around people her age and younger dying are just shocking.”

Last week, when she was put on the transplant list for a new liver, Simmons was told that she had a 50 percent chance of surviving. She soon developed pneumonia, though, Smith says, and her kidneys started failing. “She was just yellow, really yellow,” Smith adds. “She had shown up at my parents' house sick at the end of September, and her skin was yellow then, and Lynde flew in from Arizona to convince her to go to the hospital.”

Ironically, Speakeasy Tiger was named for phrases related to illegal establishments that sold alcohol during Prohibition. The band released the EP The Sore Throat in 2008, followed by its debut album, The Public, in 2009, which reached #142 on the College Music Journal Billboard top 200 chart. The band remastered the single “Oil Rising” from The Public, and re-released it in 2010, just when it was announced that Simmons was leaving the band. In 2013, the original members, including Simmons, reunited for the Marquis Theater show, but then went on hiatus.

“I wish we could get really real about the life of bands who tour and the drinking and drugs that go on,” says Kendall Oliver, a fellow musician and one of Simmons’s closest friends since 2013, who was with her when she passed. “Once you’re in that life, it’s so, so hard to find a way out, because it’s so accepted to be drunk and drugged-up all the time."

Several of Simmons’s friends point out that it didn’t matter if your name was also Kyle or not – she was always the one to give her gal friends grief if they weren’t taking care of themselves. “When I was recovering from heroin addiction, she rubbed my legs when I was dope-sick, even though she was so mad at me for putting myself there,” one longtime pal shares.

Earlier last week, Smith says she FaceTimed with her hospitalized sister, who was being pushed around in a wheelchair, laughing and cracking jokes, and for the first time seemed to be open to the possibility of rehab. “She said to me, ‘I won’t say no. I don’t know if I’m ready to say yes, but I won’t say no,’” Smith recalls.

Friends have launched a GoFundMe in Simmons’s honor to raise money to help others struggling with addiction. Meanwhile, the TikTok video of Simmons’s friends singing to her has received 1.5 million views and counting. Oliver thinks Simmons would “get a kick out of that,” adding, “That’s what she always wanted, just to share her music.”
KEEP WESTWORD FREE... Since we started Westword, it has been defined as the free, independent voice of Denver, and we'd like to keep it that way. With local media under siege, it's more important than ever for us to rally support behind funding our local journalism. You can help by participating in our "I Support" program, allowing us to keep offering readers access to our incisive coverage of local news, food and culture with no paywalls.
Make a one-time donation today for as little as $1.
Kyle Wagner
Contact: Kyle Wagner