Retrofette Sings About Bad News and Social Media on "Photogenic" 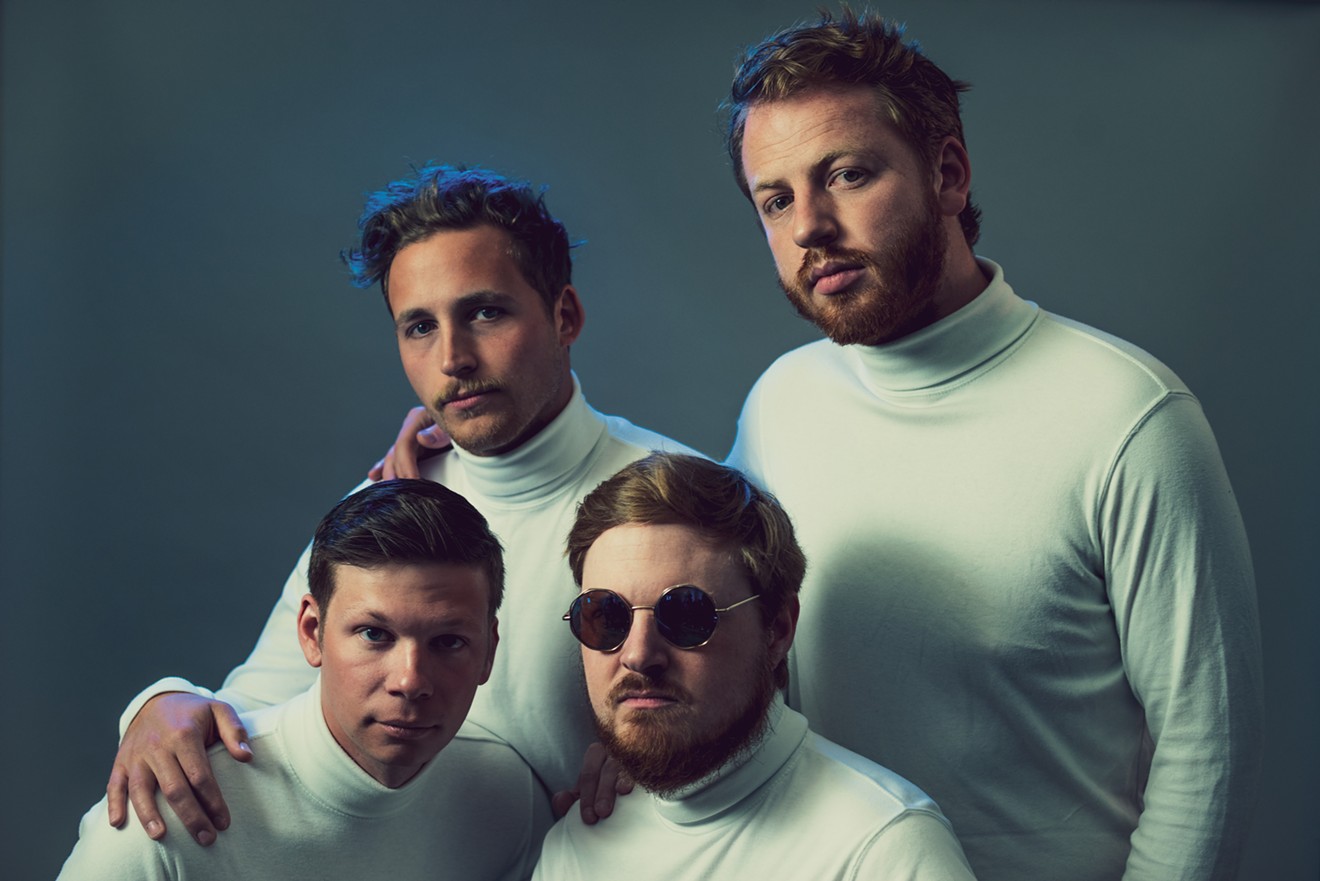 From left to right: Xavier Provencher, Ben Weirich, Dylan Johnson and Sean Culliton are Retrofette. Aidan Sëan McCarthy
Whether it's their turtlenecks, their self-conscious posturing or their brooding synth-pop, somehow the members of Retrofette manage to own cool like few others in Colorado. Even so, the self-styled hipsters are fairly humble about the accomplishment.

Aside from a few jaunts raising money for Youth on Record and a couple of other gigs, the Retrofette musicians have been locked away recording music and doing little to promote themselves since COVID-19 lockdowns went into effect. But the band just released its latest song, "Photogenic," a hip track about the anxieties of social media, and is preparing to release its first full-length this year.

Westword caught up with member Sean Culliton to find out about the new song, how Retrofette is navigating the pandemic, and what's next in 2021.

Westword: What have you all been up to over the past year or so?

Sean Culliton: A lot of reflection. As with everyone, I'm sure, COVID slowed us down quite a bit. But it still had its highlights. We got to play live twice — once at a drive-in, which was awesome, and once on Halloween. I couldn't imagine not playing on my favorite day of the year. We raised over $11,000 for Youth on Record by doing a 24-hour livestreamed DJ set. That was fun, and it's absolutely stunning how generous people are in the middle of a crisis. But hands down, the most exciting thing is that we finished a thirteen-song album that includes songs written over the past five years. Then we finished a fourteenth track, "Photogenic," to be released as a single, and it isn't on that album. So recording has been the best escape.

How are you navigating pandemic life?

I'm in Fort Collins, so I spent the first part hiking as much as possible until the fires made it impossible. Social media has been personally very taxing during this chaos, so Retrofette went sort of publicly dark, which is what "Photogenic" was written about — COVID doom-scrolling. I wrote and recorded it in basically one six-hour session, and that's been kind of the pandemic story for me. Get off work, try to not let the news affect you, have the news affect you, and then lock yourself in the studio with all your toys and write music about it.

Tell me about writing "Photogenic" and making the video.

"Photogenic" came together very quickly as a beat. I had borrowed another bandmember's vintage Juno-60, and the sounds are just so inspiring and ethereal. I think that's why it came out a little darker than most things I write. The lyrics are me reflecting on how much anxiety my social media scroll has caused. You watch a video that makes it seem like the world is about to end. Then, right after, you see some model selling you hand cream. I think maybe it's driving us all insane, so it seemed worth writing about.
The video was this awesome example of how limitation lends itself to creativity. We met up with local, multi-talented wizard Daniel Dimarchi to do a photo shoot, and since the band hadn't quarantined together, we took photos one at a time in order to not have to have a mask on. Then Danny put this strobe setting on the lights he was using, and it looked so cool we decided to shoot a video with it. It's really just us dancing one at a time in a garden shed in his back yard, but it looks so cool.

You are one of Denver's hyper-cool bands. Tell me how you do it.

Ha. It's nice to hear that's how we're thought of. We just like synthesizers too much, think turtlenecks are both funny and fashionable, and want people to dance.

I've been obsessed with sampling in music recently. Tiger & Woods has been the biggest thing for me this past year; I think their album Through the Green is genius. Nineties dance music like Corona, Dee-Lite and Saint Etienne has caught my ear in a way I never thought it would. I listened to Cassius 1999 countless times this year, and "Buffalo Stance," by Neneh Cherry, was my top song of 2020. Also, Spotify told me I was in the top 99 percent of Prince listeners in the world, so there's that.

How is Colorado as a home for what you're up to?

Last year we were looking to start touring more, and I was upset about how far Colorado is from bigger music markets. But since the pandemic has forced us all inside, I've been realizing how many amazing resources are in place here for musicians. The Bohemian Foundation in Fort Collins has given us great opportunities; a lot of local venues helped lead the charge with Save Our Stages [the part of the recently passed COVID-19 emergency relief bill offering support to the live-entertainment industry]. It's nice to have a home base that cares about you, and use the Internet to do the traveling for you.

What's coming up for you this year?

It feels so good to say that we will definitely be releasing our first full-length album. We've been so caught up in playing live that we haven't released a substantial amount of recorded music in so long. We'll be placing more emphasis on recording, writing and creating content so that doesn't happen again. And then crossing our fingers for live music at some point again.

Hear more from the band at the Retrofette website.
KEEP WESTWORD FREE... Since we started Westword, it has been defined as the free, independent voice of Denver, and we'd like to keep it that way. With local media under siege, it's more important than ever for us to rally support behind funding our local journalism. You can help by participating in our "I Support" program, allowing us to keep offering readers access to our incisive coverage of local news, food and culture with no paywalls.
Make a one-time donation today for as little as $1.