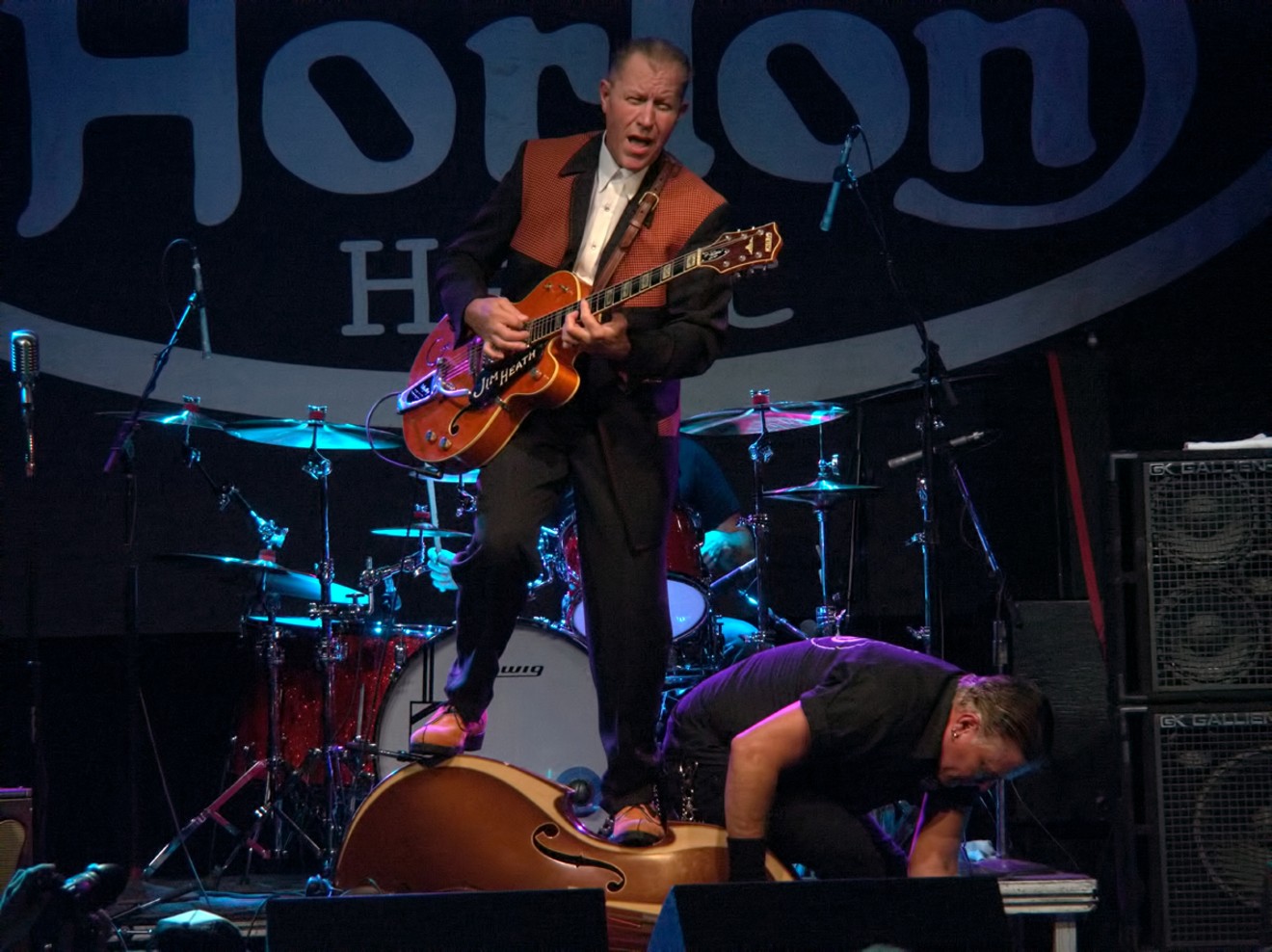 The Reverend Horton Heat will be at the Bluebird Theater February 3 and 4. John Barnes
Vintage gear stretches from one end of Jim Heath’s studio to the other, conjuring up an image of a mad scientist’s lab.

“I build a lot of my gear myself,” says Heath, aka the Reverend Horton Heat. “I’ve got these old tube microphones, old amps, analog gear and tape machines.” Cranking up his amps inside his studio is one of Heath’s favorite things to do, but he has little time for it. “If I had my druthers, I would go in the studio every day. I just start playing and caterwauling around and yelling a bunch of nonsense. I know if I do that long enough, something will come of it, like a gift from the heavens.”

Heath’s band, also named the Reverend Horton Heat, formed in Texas in 1985, with a menacing and mischievous brand of punk-infused rockabilly-country music and tongue-in-cheek lyrics. The three-piece consists of Heath on vocals and guitar and Jimbo Wallace on upright bass, with a rotating cast of drummers. The group’s discography stretches across eleven albums, the most recent being 2014’s REV, and fans are eagerly awaiting more.

Too often, the band’s nonstop tour schedule interferes with Heath’s music writing. “I can’t really be jamming around while the guys are sleeping in their bunks,” he says. And when he does get some time off, he has to put on his bookkeeping hat and manage what he calls the “small business” of the Reverend Horton Heat. “I spend a lot of time on tax compliance and looking at documents from the state,” he says wearily.

The good news is that his small business is growing, Heath says, and the band finally took some time last summer to get down to some serious writing. Unfortunately, just as the musicians were on a roll, drummer Scott Churilla quit, leaving his bandmates to spend much of their scheduled recording time looking for a new drummer. While more than 100 drummers were interested in the job, Heath knew early on who his pick would be: “We brought in Arjuna ‘RJ’ Contreras, taught him the songs, and he played great.”

Heath says the band now has ten new songs it’s fine-tuning to release later this year. While the tunes have a vintage sound, thanks to that experimental old gear in his studio, the sentiment, Heath says, is much more optimistic than it has been in the past. “I have songs that are just about enjoying life because you have a pretty wife and a little house, and [about] seeing the sunrise through the power lines. Just seeing the good and not complaining about the bad.”

That said, the new album will still deliver the hell-raising, hard-charging sounds of “psychobilly freakouts” that Reverend Horton Heat fans love. Heath has been called the “Godfather of Psychobilly,” but it’s not a title he claims: “We like a lot of those bands, but we aren’t just that; we can also get a little jazzy, bluesy and country.”

The Reverend Horton Heat regularly plays psychobilly festivals in Europe, where the genre has been popular for a long time. Heath says the “Godfather” title has caused strife: “There were guys who wanted to kick my ass because of it. They take it seriously over there! And rightfully so. Those festivals are crazy good, and I’m grateful they accept us.”

One thing is for sure: When the Reverend Horton Heat comes to town, Heath dresses sharply. He’s known for wearing bold-colored country-Western suits, often adorned with music notes, flames and other embellishments.
“I love the look of the old country artists,” he says. “When I was a kid, my dad took me to the San Antonio Stock Show. Right in the middle of it, all the lights went down and out comes Rex Allen, the last of the singing cowboys. He had rhinestones on his suit and his horse saddle, and when the lights hit him, he was a like a horse-riding disco ball! That was it for me.”

Heath’s style suggests a hint of rebellion: The band signed to Sub Pop Records in the ’90s, the peak of the grunge period. “I decided I was going to be the anti-grunger, so I started showing up to gigs wearing a suit.”

The Reverend Horton Heat will return to Denver for two shows, February 3 and 4, at the Bluebird Theater, after playing three successful shows in November. What keeps the group coming back for multiple dates? “Denver is a great town for us, and it has been for a long time,” says Heath. “They have a great rockabilly/roots scene there and a lot of really good local bands. There are a lot of great cities in America, but they just don’t have the kind of enthusiasm for music that Denver has.”