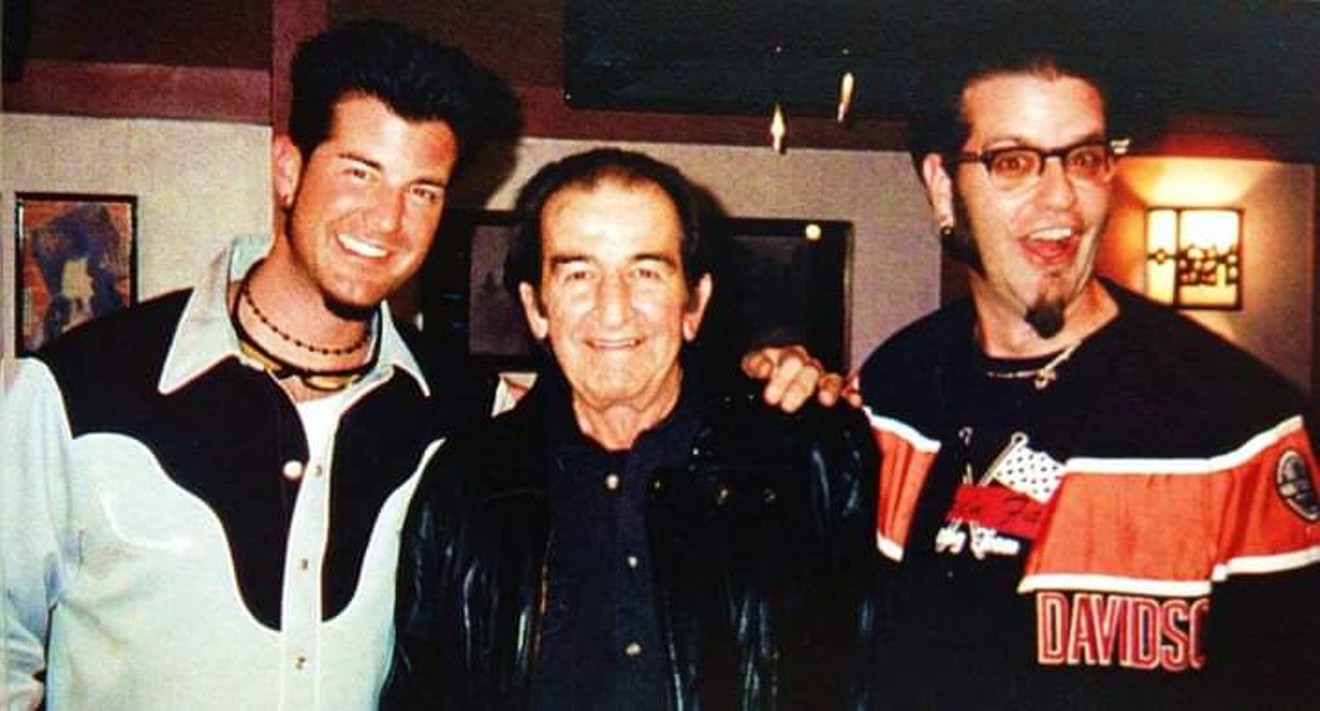 Mik and Don Messina with their father. Krista Koehler
Mik “the Stik” Messina, bassist for the notorious Brethren Fast, died on July 16 at the age of 56 following a long illness, nearly six years after the death of his younger brother, Don, who was the band's singer and guitarist.

In the early days of Brethren Fast, the Messina brothers knew they were more than just musicians. They were showmen.

"To be a successful band, you've got to have more than just music," Mik Messina told Westword in 1995, the year the group formed. "If you're going to see a band, it should be something that turns you on. There should be something cool to look at, as well as good music."

Tommy Nahulu, a muralist and longtime fixture in Denver’s music scene, remembers Mik having “swagger that was unmistakable, and he just had a stage presence that was undeniable. He just carried off this very youthful presence, and I think a lot of people thought he was younger than he was.”

The Messina brothers would wear Speed Racer-style outfits and massive sideburns. Although they looked rockabilly, they would often work funk grooves into their songs.

"Groove!" Mik told Westword. "The way I describe it is just groovin', right out groovin'. We just dig it. To me, probably my favorite guitar player is Brian Setzer from the Stray Cats. That whole scene and vibe is just cool and fast and fun and rockin'. To me, that's the only way to go."

Mik also had rock-star looks – great lines in his face and beautiful eyes and a pompadour — that made the bassist a chick magnet, says Nahulu. Jonny Barber, who shared a deep affinity for Elvis Presley with the Messinas and played in the band Spiv with his own brother, shared many a bill with Brethren Fast, partly because they were both acts with two brothers.

“I can't even tell you how many girls cried on my shoulder, late night at the bar, that were just, like, pining for Mik the Stik,” Barber says. “I don't know how many there were. Just legions. He had so many female admirers, it was insane. I had so many people just come to me after the show, say, ‘Can you introduce me to the Stik?’ 'For sure. I mean, he's pretty approachable, and you could just walk over there and say hey. I’m sure he’d talk to you.' There were lots of girls crushing on him.” 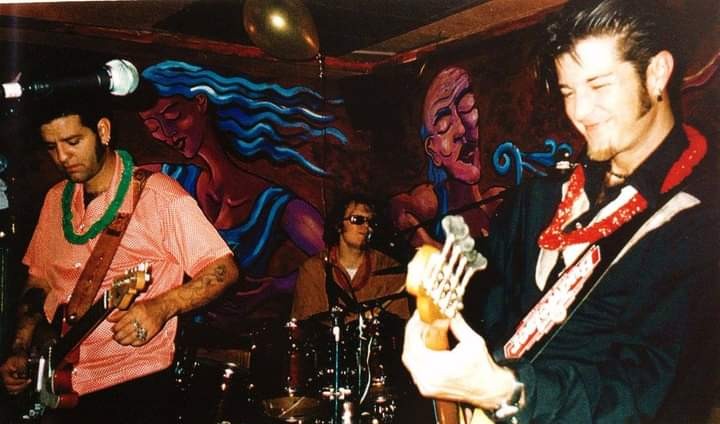 Brethren Fast (Don Messina, Gordon Beesley and Mik Messina) playing on New Year's Eve 1998.
Krista Koehler
Barber thinks Mik might have gotten his nickname from a long-neck bass he played, but Nahulu says it also could have another connotation, given that Mik was a chick magnet. "It could kind of fit the bill in both areas," Nahula explains. "I haven't seen one bad picture of him."

While Mik was easy on the eyes, Nahulu says he was a really good guy as well.

“It seemed that he kept that presence with the band,” Nahulu says. “That reckless look, like boys out of control. But he had a good grasp on what he was doing on stage, and he let his brother go berserk and fun and crazy. I really felt like he knew how to read a crowd and deliver the fun that he knew they were coming to see and expect. He just had a great sense about him.”

The Messina brothers wrote a lot of songs for Brethren Fast about drinking and having a good time, something they would both indulge in.

“There was a part of me that forgave him for not being able to pull away in time to, I don't know, save his liver and kidneys,” Nahulu says. “He's a guy that should have stayed with us. But I think his body said, ‘You know, I gave you some fun, didn't I?’ Didn't we really have a good ride?’”

Mik died nearly one month after Arvada police officer Gordon Beesley, who was the drummer for Brethren Fast before joining the Railbenders, was shot and killed. Brethren Fast had a few other drummers over the years, including Ordy Garrison and Nate “Dog” Nicholson, "and he was a big presence with them," Nahulu says.  “Even with bigger bands, there’s always a survivor that you feel like you're still here — like the Beatles, because Paul McCartney is here and Ringo Starr is here."

But the Brethen Fast that made such a mark on Denver is now just a memory.

After posting about Mik Messina’s death on Facebook, Nahulu says someone added a comment saying that he felt "like the street was ripped off the map. And that really kind of captured that feeling. We do have pictures and we will have pictures that will live forever, and their recordings. But it's very bizarre to have a whole band not be here anymore."

Mik Messina’s memorial service will be in the Gallagher Memorial Chapel at Mount Olivet Cemetery, 12801 West 44th Avenue at 11:30 a.m. on Monday, August 2; it will be followed by a celebration of life at the Elks Lodge at 5700 Yukon Street, Arvada, from 1 to 4 p.m. Attendees are asked to wear white attire.
KEEP WESTWORD FREE... Since we started Westword, it has been defined as the free, independent voice of Denver, and we'd like to keep it that way. With local media under siege, it's more important than ever for us to rally support behind funding our local journalism. You can help by participating in our "I Support" program, allowing us to keep offering readers access to our incisive coverage of local news, food and culture with no paywalls.
Make a one-time donation today for as little as $1.