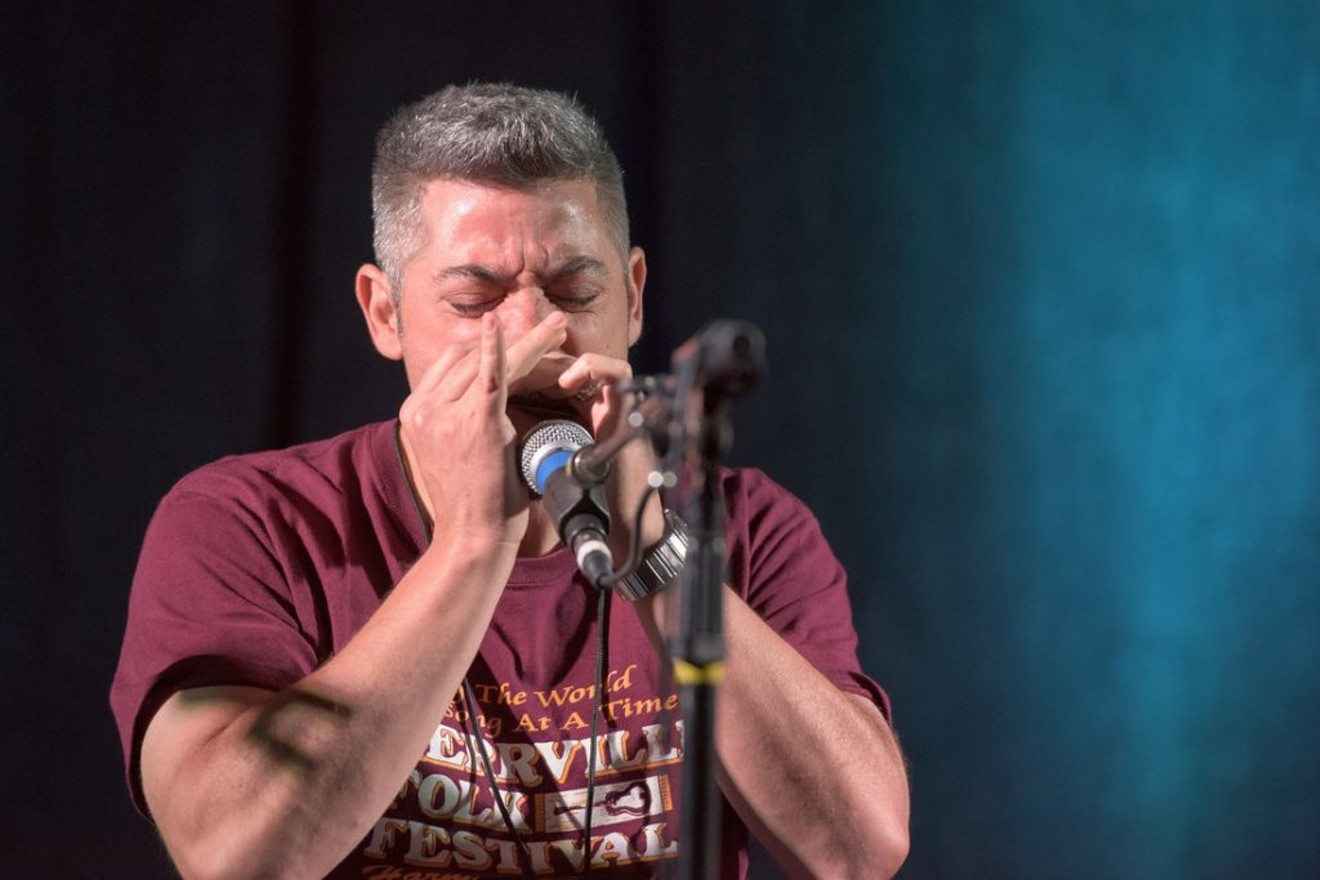 Ronnie Shellist is a harmonica master. Courtesy Ronnie Shellist
Among the harmonica’s many wonderful and unique traits, there is this: You have to really suck to be good at it. As one of America’s finest and busiest harmonica players, Denver’s Ronnie Shellist inhales and blows with the very best of them. “Working harmonica player” can bring to mind such thoughts as, “No wonder you have the blues!” or, “What’s your day job?” But you can scratch that thinking when it comes to Shellist: He is one of the rare musical types who actually makes a living by mastering the ten-hole, twenty-note mouth harp.

Stranger still, he earns his daily bread not through three-set gigs in scruffy bars, but largely from the comfort of his home, where he is a full-time instructor of blues harmonica. “This has been my full-time gig and sole means of income for over a decade,” Shellist says. “I'm able to earn more money running my teaching business than I ever made in any sales job — or anything else, for that matter. I work my ass off, but I love it.”

He gets the bulk of income from his website, harmonica123.com, where beginner and advanced Little Walter worshipers pay to get monthly how-tos from Shellist’s seemingly bottomless trick bag. He also records and sells his lessons as downloads (along with additional tips and jam tracks) that students can buy and dig into on their own time. For additional dough, Shellist teaches private lessons via Zoom; he also presents an impressive virtual series he calls the Global Blues Harmonica Summit. His next summit, on Saturday, December 10, will have a very special feature guest: the legendary Charlie Musselwhite, who has played with numerous blues and rock legends over his fifty-year career.

To round out his harmonica-powered career, Shellist conducts clinics and promo events around the nation for the iconic harmonica maker Hohner, and he has a YouTube channel packed with clips of his playing and guidance for more than 38,000 subscribers. That’s where his harp teaching first took off in 2006, when he posted his first tutorial. “I had a video go viral,” he recalls. “That video now has 2.3 million views and the rush of inquiries and questions about harmonica were overwhelming.” He created his website two years later.

It’s a musical life that’s anything but sucky, and it all got started — as it does for many harp players — with a gift from his father.

“My dad bought a harmonica for me when I was in college,” Shellist recalls. “Once when I was back home visiting family, I picked it up again and it just clicked. From there, I fell in love with the blues.” He dug deep into the instrument, researching his early harmonica heroes such as Sonny Boy Williamson II, William Clarke, Gary Primich and Big Walter Horton. Shellist began playing local stages in his then-home of Austin, Texas, before shifting to teaching online fans. “I began teaching harmonica within a few years of picking it up,” he recalls. “It just came natural to me to begin sharing and teaching. I was a Spanish teacher before picking up the harmonica.”

The interest in the harmonica goes way back. Historians trace its roots back some 3,000 years to a large Chinese instrument made of bamboo and reeds called the sheng. The history of the palm-sized harmonica we know today dates back to the 1800s and was popularized by Mathis Hohner, the German clock maker whose company launched in 1857 and remains the world’s largest and most recognized harmonica producer.

The harmonica was embraced by travelers, cowboys, soldiers of every nation, folk singers and vaudeville artists before an explosion in popularity with ’50s and ’60s bluesmen. The list of famous players stretches from the Harmonicats and Bob Dylan to Bruce Springsteen, Stevie Wonder and Willie Nelson sideman Mickey Raphael. On the modern, bluesier side of things, there’s a long list of ace players, topped by Kim Wilson of the Fabulous Thunderbirds.

When COVID sidelined the globe’s musicians and sent them to the internet to cobble together an income, Shellist was already online and working. “Business was good before the pandemic,” Shellist says. “But when it hit, my classes grew from averaging around 80 folks to more like, 125-plus. The biggest class was around 200. But I was ready for it. I had the technology in place, as well as a robust list of 5,000 harmonica students.” He says his number of students has now dropped back to pre-pandemic levels, “but I'm seeing a larger number of unique customers and a wider range of students checking out my classes.”

The majority of his students are men between fifty- and 70-years-old, but his classes also hold a number of women. He has also seen a recent increase in interested players between twenty- and thirty-years-old.

For those who take up and stick with the pocket rocket, the bennies can be big. Monetary profits aside, playing any musical instrument can be the most effective form of mental health care there is. And at about $25 for a starter version, the harmonica is phenomenally cheap; at around $60, Hohner’s legendary Marine Band and Special 20 are still affordable staples for gigging musicians, though Hohner and other makers now offer high-end versions for double or even triple that figure.

But for Shellist, the instrument has a priceless value. “The harmonica,” he says, “is one of the most expressive instruments, especially in the context of blues music. It's the closest instrument to a human voice and singer. You can make it cry, wail or sing. You can play just rhythm, just melody, or combine both for that front porch-style playing.”

And if you need another reason to adopt his chosen instrument, Shellist has one: “Playing the harmonica is also great for learning to diaphragmatically breathe,” he notes. “Health benefits are always a bonus!”

Global Blues Harmonica Summit, Saturday, December 10, noon. Tickets are $40. For more information on Shellist, visit RonnieShellist.com.
KEEP WESTWORD FREE... Since we started Westword, it has been defined as the free, independent voice of Denver, and we'd like to keep it that way. With local media under siege, it's more important than ever for us to rally support behind funding our local journalism. You can help by participating in our "I Support" program, allowing us to keep offering readers access to our incisive coverage of local news, food and culture with no paywalls.
Make a one-time donation today for as little as $1.
Marty Jones