Bonobo's Ready for a Break – but First, Westword Music Showcase 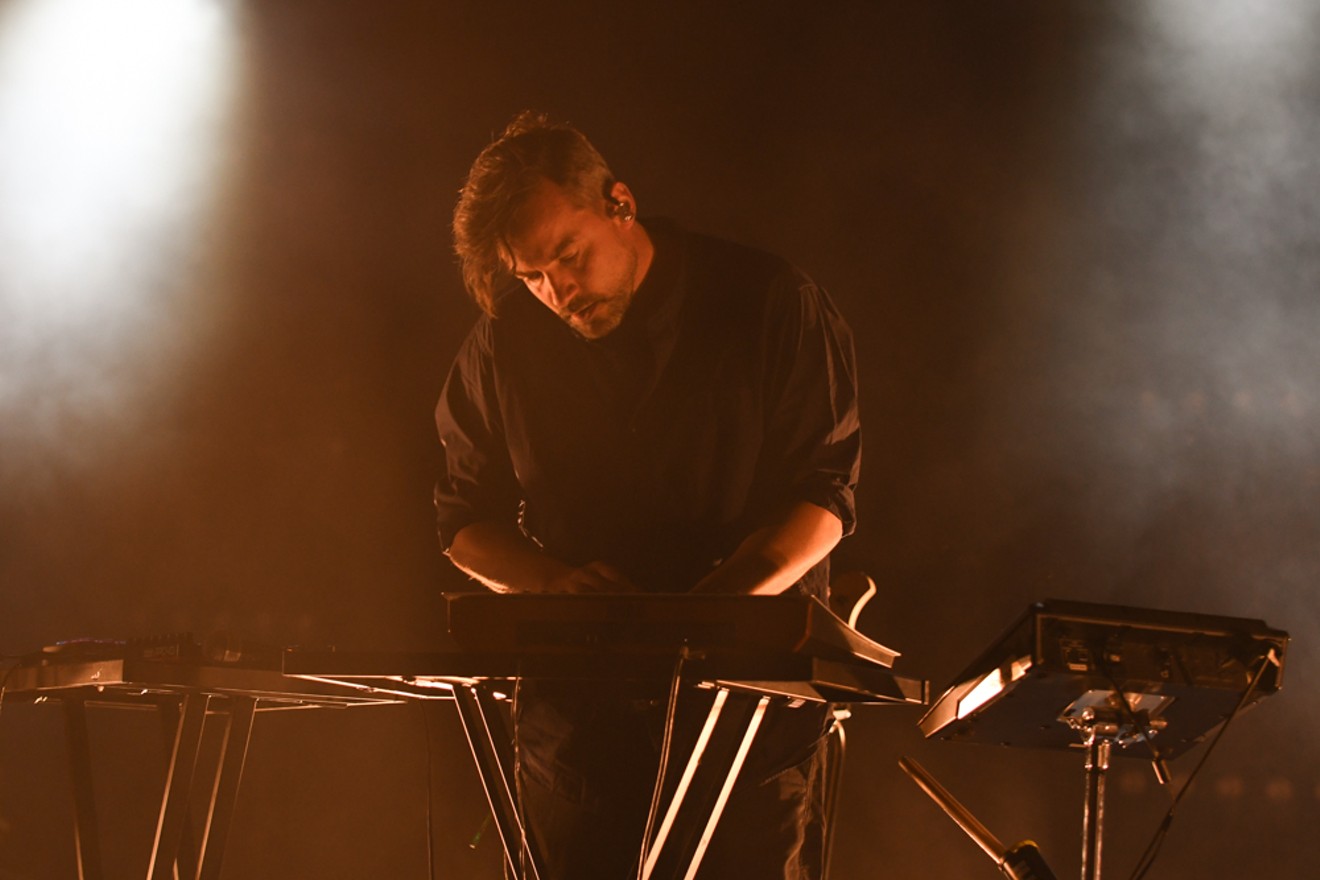 Bonobo Miles Chrisinger
Producer and beatmaker Simon Green, better known by his stage name, Bonobo, has become one of the most respected names in electronic music. Once an obscure DJ on the roster of the U.K.'s Ninja Tune Records, Green routinely packs venues and tops festival lineups around the world. Denver is no exception: Bonobo is headlining the Westword Music Showcase on Saturday, June 23.

But he's also an unlikely superstar. While Green's records — including 2017's Migration — have their share of danceable moments, he's no Top 40, party-banging DJ. His music steers toward the ethereal, often borrowing soundscapes from far-off cultures. His music is catchy, but also profound.

As it turns out, that worldly and organic feel has a lot to do with Green's travels and a personal penchant for recording real-life sounds that happen to catch his ear when he's away from his studio. We wanted to find out more about his process. In anticipation of his set next month at Showcase, we called and chatted with the producer in Los Angeles, where he lives.

Westword: So, first thing, because people have been asking: Are you bringing a full, live band for the Westword Music Showcase?

Bonobo: Yes, there's going to be a live band.

Cool. So how do you prepare for that, as opposed to your solo DJ sets? I know that you record almost everything on your albums yourself, so do you have live musicians learn the parts you recorded?

Exactly. I think there's a misconception that the live band on stage is how the records happen, as well, but that's not the case. They kind of hear it at the same time as everyone else does. My records are not informed by whether the music is going to work live. I just kind of make the music I want to make and worry about how to deconstruct it for a band after.

Speaking of your records, I read that you collect all these field recordings from around the world — that you're constantly looking for unique sounds that you can incorporate into your music. I think I saw that you even recorded a drying machine one time. So how often are you doing this? Are you just collecting recordings on your phone as you walk around and hear stuff?

Pretty much, yeah. In the very beginning, I kind of had this hip-hop, cut-and-paste approach to music. The first record, especially, was from looking at people like DJ Shadow and A Tribe Called Quest, and I think a phase that a lot of people go through when they start sampling is to go out and stamp on twigs and try to record that kind of stuff.

Bonobo on May 12.
Miles Chrisinger
Did you ever stamp on twigs?

Of course I did! Yeah, I also went out and took my microphone to a stream, you know.

But to me, it's more about the actual texture of the sound rather than the concept of it. What I'm doing is collecting sonics. So, like the dryer — it's not a very interesting thing in itself, but it has a rhythmical quality because it's hitting this cycle every time. And within that there's things falling around inside [the dryer] that gives it sort of natural randomness, but it's always coming back to this one repetitive thing. So mechanics are a really good thing to record because there's rhythm.

Really, there's rhythm in everything. If you think about it in a much bigger context: The world spins once a day, and it goes around the sun once a year, and within that, there's sort of like BPMs, things that happen sixty times a minute, a hundred times a minute. So there's all of these macro and micro rhythms to be harvested.

I've got to know: Where and when did you capture the recording of the dryer?

It was backstage at a rock club in Boston, on the Black Sands tour.

Are you ever capturing these recordings in public, and people see you with a phone or recording device and think, 'What is that guy doing?'

No, I don't think so, because I'm very subtle. I just hold a phone like I'm texting. Often, it's just like when I stayed in this Airbnb once — a warehouse in Downtown L.A. — and there was this boiler that was malfunctioning in this really neat way, making these gurgling, popping sounds. So I just held out my Sony recorder.

Oh, I see what you've done there [laughs].

Yeah, that was a bad dad joke. Anyway, do you have any favorite recordings you've captured in the field, or any unusual discovery stories?

There was a time I was around those fan boats that go across swamps, and the fans had a really rich, multi-textural sound. So I used that as a waveform for a bass line on the title track for Migration.

I'm a big fan of Migration, because the album has such a cohesive feel to it. And today with electronic music, especially with streaming services, there seems to be so much of a mindset around releasing singles. You seem to focus on putting out albums. So I was wondering if you see albums as a decreasing trend.

It depends. I think that for the club-music side of electronic music, the soundbite approach works for people. Like, on the EDM end, there are a lot of artists that just release one song at a time. But I grew up on albums, and I think that there's more to be said with a whole body of work than just one part. Albums are a journey, and I even find that as a DJ, with less than two hours, I can barely communicate anything. So I like to play long sets.

Where are things heading for you? Are you still riding out the journey of Migration, which you released in January 2017, or are you already on to the next big album? What's next?

I'm not really trying to think too hard about what's next. I think that's important — not to force it. I think that after the last five years, I'm kind of ready for a break.

Westword Music Showcase, June 23, Golden Triangle neighborhood.
KEEP WESTWORD FREE... Since we started Westword, it has been defined as the free, independent voice of Denver, and we'd like to keep it that way. With local media under siege, it's more important than ever for us to rally support behind funding our local journalism. You can help by participating in our "I Support" program, allowing us to keep offering readers access to our incisive coverage of local news, food and culture with no paywalls.
Make a one-time donation today for as little as $1.