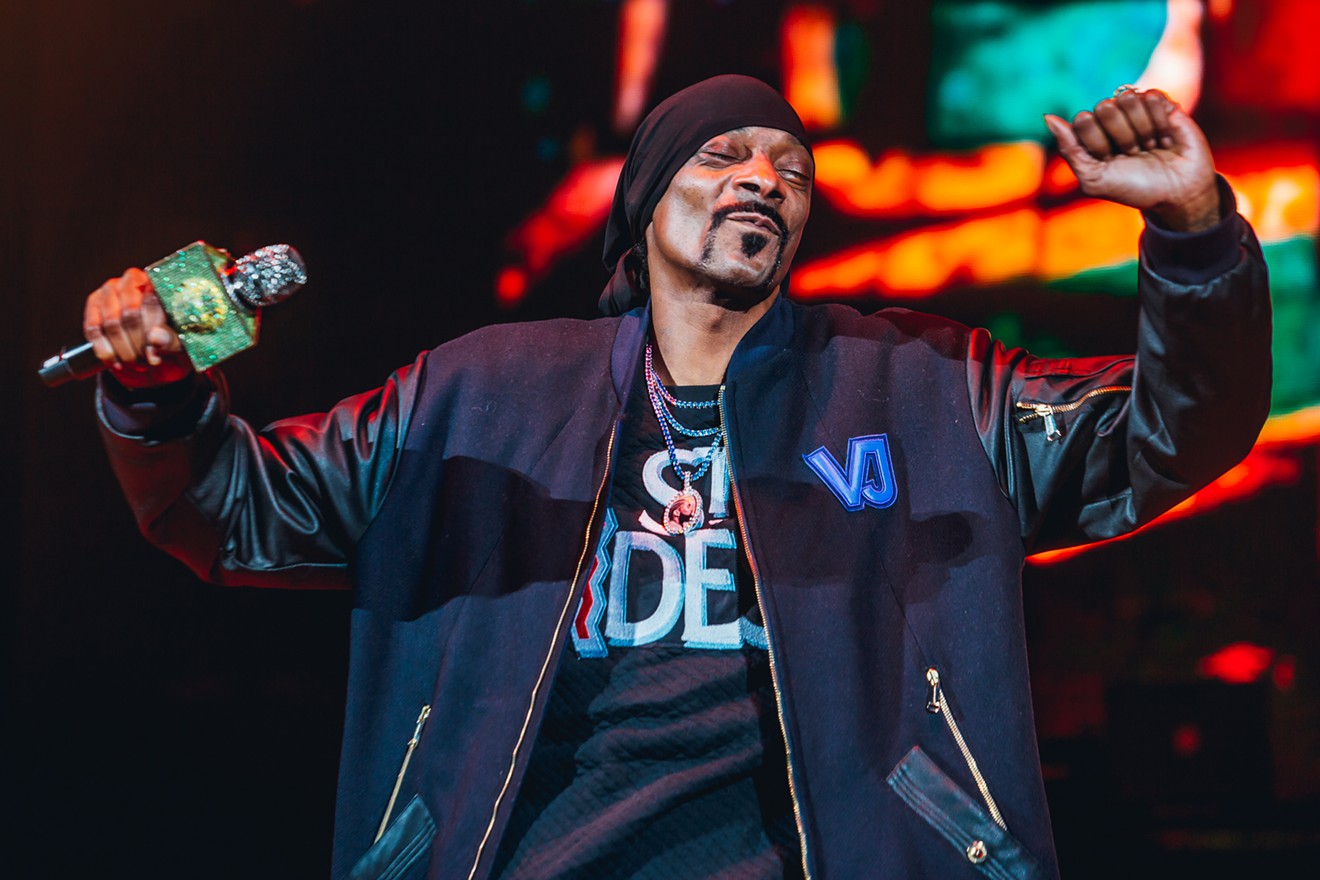 The one, the only, Snoop D-O-double-G, at a previous Denver concert. Brandon Johnson

In a cold, cruel world, there is hope. There is Snoop Dogg.

At his Friday night I Wanna Thank Me tour stop at the Fillmore Auditorium, nearly three decades into his career, the rapper demonstrated why he's still an icon, a cherished figure in pop culture who can still show us an all-around good time — while bringing together often embattled forces.

On Friday night, you could smell the crowd gathering outside the Fillmore from a block away. Beefed-up security, extra "No Smoking" signs, and the most thorough bag checking I've ever seen at a concert could not deter fans of the famously weed-friendly rapper from bringing out their best bud. At some point, the venue just has to accept that's what you get when Snoop Dogg comes to town.

Openers Trae Tha Truth and RJMrLA got the party started, delivering high-energy performances with impressive stage presence. Both artists showcased their ability to rap over powerful beats, while also being unafraid to go a cappella. RJMrLA in particular, as well as his DJ, DJ Goofy, captured the attention of the crowd — no easy feat in a room packed with restless and stoned concert-goers. They had the whole venue looking like they were playing a game of Simon Says. Hands were in the air, the crowd was singing along, and when DJ Goofy asked for weed, fans happily obliged. Joints, blunts and even straight-up nug was hurled on stage from all angles. When RJMrLA exited the stage, DJ Goofy continued to get the crowd hyped during the transition with retro favorites like "Jump Around" and "This Is How We Do It"

But let's be honest. If you're at a Snoop Dogg show, you're there because of Snoop Dogg himself. The crowd seemed to double in size when it neared time for him and longtime collaborator Warren G to take the stage.

Snoop knows how to make an entrance. With roaring cheers from the crowd, a giant pot leaf projected on screen and four stripper poles flanking the stage, Snoop arrived, but Warren G was strangely nowhere to be found — and he never showed. 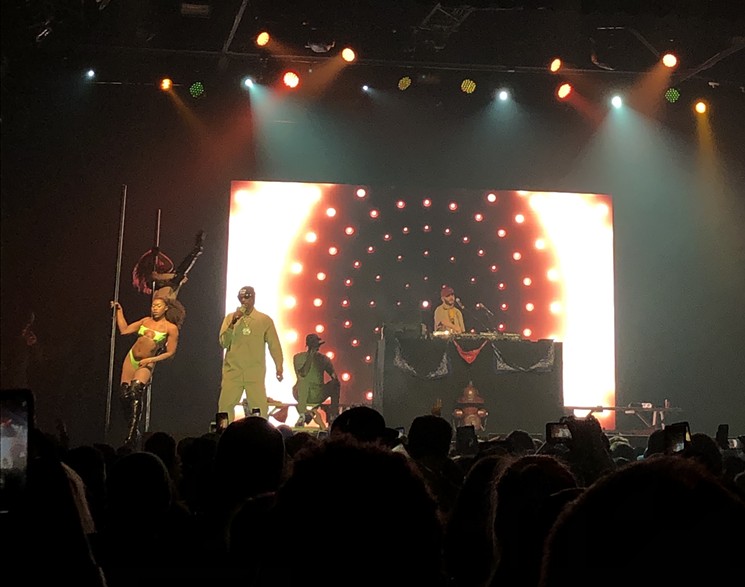 Right out of the gate, Snoop dropped two of his most famous hits back to back: "The Next Episode" and "Nuthin' but a 'G' Thang," both Dr. Dre collaborations from the ’90s. Anyone who thinks that weed slows you down ought to see Snoop in action. Framed by bikini-clad pole dancers on both sides, Snoop swaggered back and forth across the stage without skipping a beat or missing a lyric. He served up signature Snoop fashion with waist-length braids cascading from a black beanie, a gigantic chain, oversized clothes that looked even baggier on his lanky frame, and sunglasses that stayed on through the entirety of the show.

Snoop brought the heat with a range of other artists' popular tracks that include his verses, including Akon's "I Wanna Love You," Lil Duval's "Smile (Living My Best Life)," and DJ Khaled's "All I Do Is Win." Snoop shared the stage with vocal support, a DJ, twerking backup dancers and someone in a mascot-style Snoop Dogg suit, complete with a prop blunt the size of a baseball bat. The DJ booth was adorned with a red cartoon fire hydrant, in the same style as his playful Doggystyle album cover. The booth was also draped with a garland of blue bandanas, signifying Snoop's Crip gang affiliation, but notably included a red bandana (symbolic of the rival Blood gang) in the center, sending a clear message of unity, one that would be echoed later in the show. The DJ booth included a cartoon fire hydrant and red and blue bandanas.
Cleo Mirza
Sporadic smoke signals flaring up from the audience morphed into one massive, hovering cloud as the show went on, but Snoop opted to take a quick "smoke break" off stage while the DJ played "Drop It Like It's Hot." I for one was bummed to think that we wouldn't actually get to see the classic track performed by Snoop Dogg himself, but he triumphantly re-emerged on stage halfway through to finish out the song. When he returned to the stage, he had changed into a red T-shirt depicting two men shaking hands, one wearing red and one wearing blue, with the message "UNITY" in bold graffiti lettering. The guy in the Snoop Dogg mascot suit waved red and blue bandanas tied together, and even the pole dancers twirled around in red and blue bikinis. It seems that in his later years, Snoop has forgone his Crip identity in favor of promoting peace.

The tempo dropped and the crowd began to sway as Snoop played "Take Me Away," off his most recent album (and the tour's namesake), I Wanna Thank Me. When Snoop Dogg plays a song about the kush taking you away and tells you to light up, you light up. No matter what age, gender or race, I swear every person in the room pulled out something to smoke. Not everyone had rhythm, but everyone had weed. 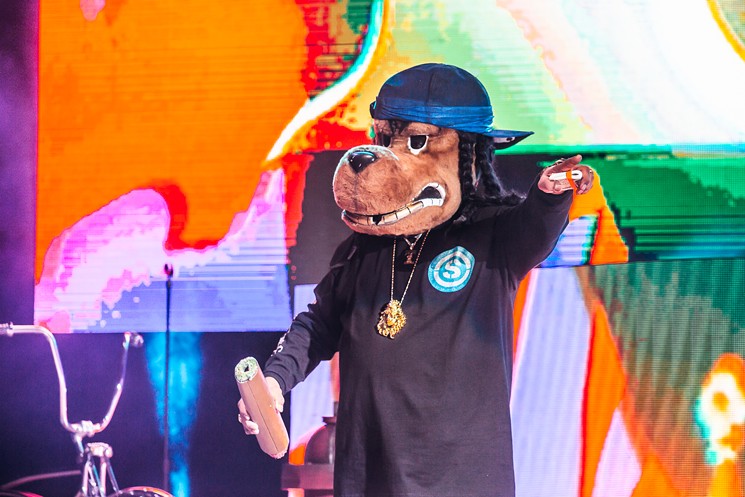 Then the mood took a more somber turn as Snoop announced a "heat check," testing the crowd's hip-hop history savvy. He asked if we had love for some of hip-hop's OGs, and dropped into a tribute section honoring Eazy-E, then Biggie Smalls, then Tupac. As he covered "Boyz-n-The-Hood," "Hypnotize," and "I Ain't Mad at Cha," I was struck with the realization that Snoop is one of the few rappers left who lived and made music with these departed greats. As opposed to most modern rap artists, there's something special about hearing Snoop cover these classics, knowing that he walked among the giants who originally recorded them. It was a touching tribute, but the party quickly got started again as the compilation dropped into the celebratory "Gin and Juice."

But Snoop Dogg wasn't done paying tribute to his fallen brothers just yet. As Nipsey Hussle's picture came on screen, Snoop held a moment of silence for his fellow Crip, who was fatally shot in South L.A. earlier this year. Given how many hip-hop artists have ultimately succumbed to gang violence and turf wars, Snoop reiterated his message of peace and unity with a performance of "One Blood, One Cuzz" (another track off of I Wanna Thank Me), complete with red and blue light design. Snoop's shirt, as well as the general red and blue color scheme, promoted a message of unity.
Cleo Mirza
To conclude the evening, Snoop gave a shout-out to Colorado for being the first state to "legalize that shit." He asked fans to place their hands over their hearts and join him in singing the national anthem. By the national anthem, of course, he meant his Grammy-nominated song "Young, Wild & Free." With the lyrics displayed on screen karaoke-style, the whole crowd sang along. When the song was finished, Snoop announced that there would be no encore, and walked off stage to Bob Marley's "One Love." The venue emptied without fanfare before 11 p.m. The weed had been smoked, the hits had been sung, the merch had been sold, and I left satisfied, uplifted, and utterly charmed by the great Snoop Dogg.
KEEP WESTWORD FREE... Since we started Westword, it has been defined as the free, independent voice of Denver, and we'd like to keep it that way. With local media under siege, it's more important than ever for us to rally support behind funding our local journalism. You can help by participating in our "I Support" program, allowing us to keep offering readers access to our incisive coverage of local news, food and culture with no paywalls.
Make a one-time donation today for as little as $1.