Me First and the Gimme Gimmes Play Trash Music 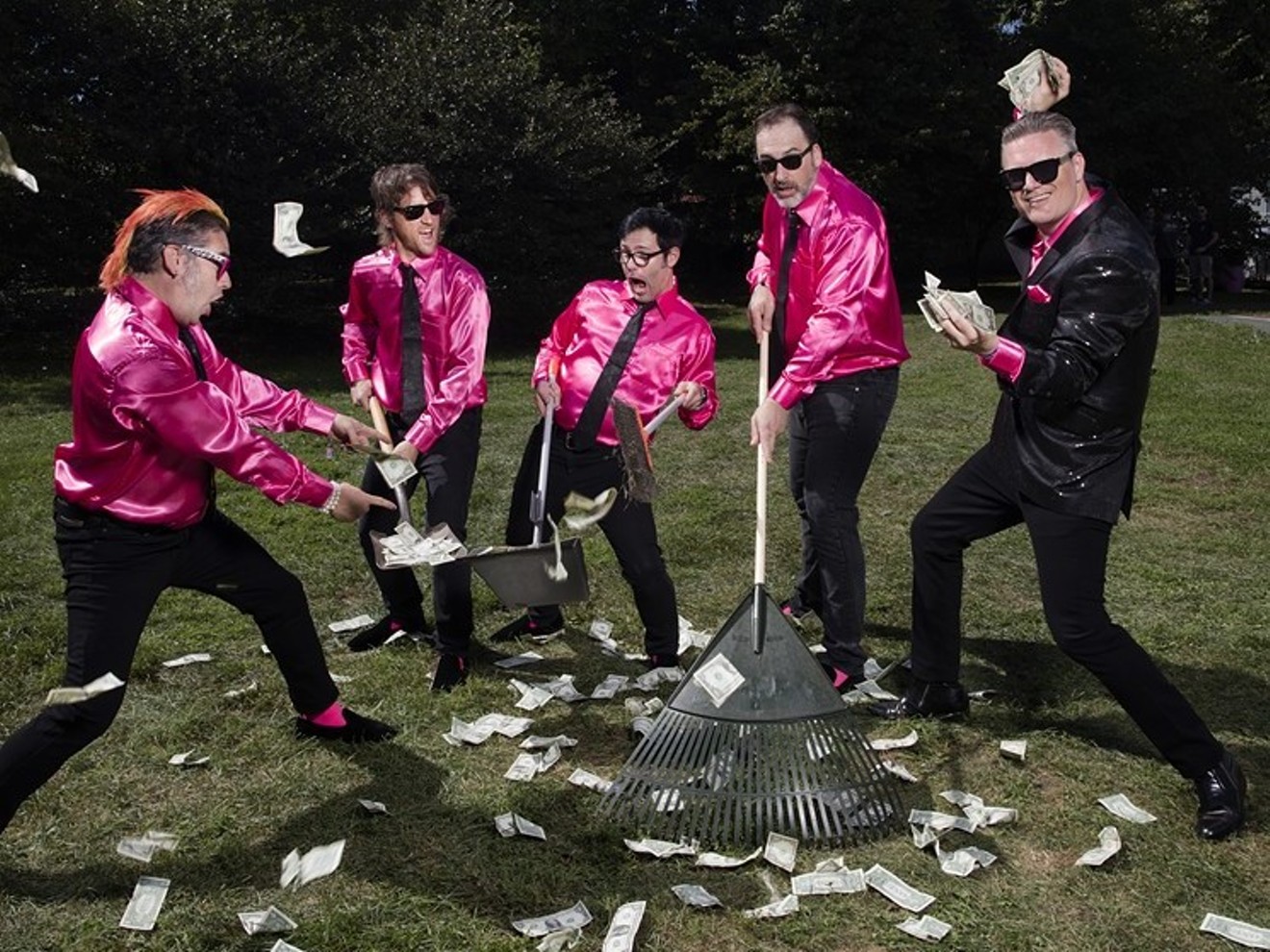 Me First & the Gimme Gimmes Courtesy of Fat Wreck Chords
They say that in comedy, timing is everything. That’s the art of the joke, or funny movie scene — the setup, the anticipation, the payoff. And yet here’s a head-scratcher: How has punk supergroup Me First & the Gimme Gimmes traded off of the same gag for more than twenty years and, more perplexing, remained hilarious?

The band formed in 1995 with a core lineup of NOFX’s Fat Mike, No Use for a Name’s Chris Shiflett (also now of the Foo Fighters), Lagwagon’s Joey Cape and Dave Raun, and Spike Slawson, best known for his work with the Swingin’ Utters and the Re-Volts. The 1997 Have a Ball debut album set the tone: the band performing punked-up covers of non-punk songs. That first record was made up almost entirely of songs from the 1960s and ’70s, and each album since has had a loose theme.

The most recent, 2014’s Are We Not Men? We Are Diva!, was composed of songs originally performed by divas such as Cher, Christina Aguilera, Lady Gaga and Barbra Streisand, and there isn’t as yet any new material on the horizon, though April saw the release of Rake It In: The Greatestest Hits compilation. Singer Slawson admits that he doesn’t know when new music will emerge.

“I’m generally the last to know, but if it were up to me, I’d love to continue to do seven-inches,” he says. “If we were to do a full-length LP, I’d like for it to come together more naturally than just sort of devising a theme and then trying to throw songs at it. It’s much more fun to me, and I like the A.M. Gold stuff. That was very fertile ground for us. The Gilbert O’Sullivan, John Denver — that sort of stuff. It was perfect for our idiom, and there was so much of it.”

He’s absolutely correct; the joy of Me First & the Gimme Gimmes is the fact that the musicians take songs that their fans likely wouldn’t give any time to previously, and make them not only funny but enjoyable on a musical level. The fact that the albums have a theme helps tie the songs together, but it’s not really necessary. The looser the theme, the better.

“Our running theme is where we’ve taken our live set, which is sort of a weird kind of American schlager direction,” Slawson says. (Schlager music is a type of schmaltzy German pop.) “An American take on German schlager music. Because we do trash too. I dare say we do trash better than the Germans, although schlager is definitely a strong entry in the trash field. Everybody loves schlager. Even people who go to punk shows, they love schlager. And not nearly as ironically as you might hope or expect.”

Critics say that the band is a one-trick-pony, and there’s some truth in that. But what a trick! The fact that the band members all have day jobs and only reassemble when schedules permit helps prevent the group from going stale. Slawson thinks that the original idea has evolved a little, although he struggles to put his finger on exactly what has changed.

“Some things have evolved,” he says. “It’s tough to say what’s changed, or to even look at things like that without getting this weird, nostalgic, nauseous vertigo. It’s like looking at your own life. I sometimes think the themes took us away from our mission statement. I’ll put it this way: I hate A.M. rock, but I love our versions of A.M. rock songs. That (bandwidth) was where you went when rock-and-roll was too scary or heavy for you. Where you could be assured that you’d hear Neil Diamond, or Tom Jones was the heaviest thing you’d hear. I’ve learned over the years that, when we try to do songs that I like, that’s generally when we misfire.”

The popularity of the Foo Fighters, NOFX, Lagwagon, etc... means that the band members find it very difficult to get into a room at the same time, which explains the lack of new material for nearly three years, and this new compilation.

“It would go a long way towards explaining our shameless money-grab of this new ‘Best Of’ record,” Slawson says. “Although it does represent us in our live element. It’s an overview of our traveling circus. We’re mining our back catalog for this new release, so obviously it’s a challenge to get all of us in a room together, but not impossible. It’s good because we can’t force the issue. It just happens when it happens, and we’ve learned to accept that.”

That said, the musicians involved are so seasoned and, dare we say, professional at this point that they can jump right back into Me First & the Gimme Gimmes duty at the drop of a hat.

“It’s not something that we need to spend hours upon hours fine-tuning,” Slawson says. “We know what it is. We’ve been doing it for long enough that, if we work a couple of songs in, we just figure them out at soundcheck.”

On May 7, the band brings the comedy punk magic to Summit, and Slawson says that the environment of Denver is one that he can enjoy.

“It’s like a weird vision of a west without earthquakes,” he says. “I grew up with a lot of brick, which I appreciate and enjoy. Denver has that, and it’s pretty. Legalized recreational weed is fun for everybody.”

As for the set this time around, Slawson says that there will be new costumes to enjoy which, though he admits it sounds superficial, offers the artists a character, an alternative personality to inhabit.

“It may be an embellishment of yourself, or it may be something completely different,” he says. “It’s just a good, fun, funny, energetic show. You’ll have a good time. You’ll laugh. You’ll cry. You’ll be angry at points. We cover the range of emotions. American schlager is what you can expect from Me First and the Gimme Gimmes.”