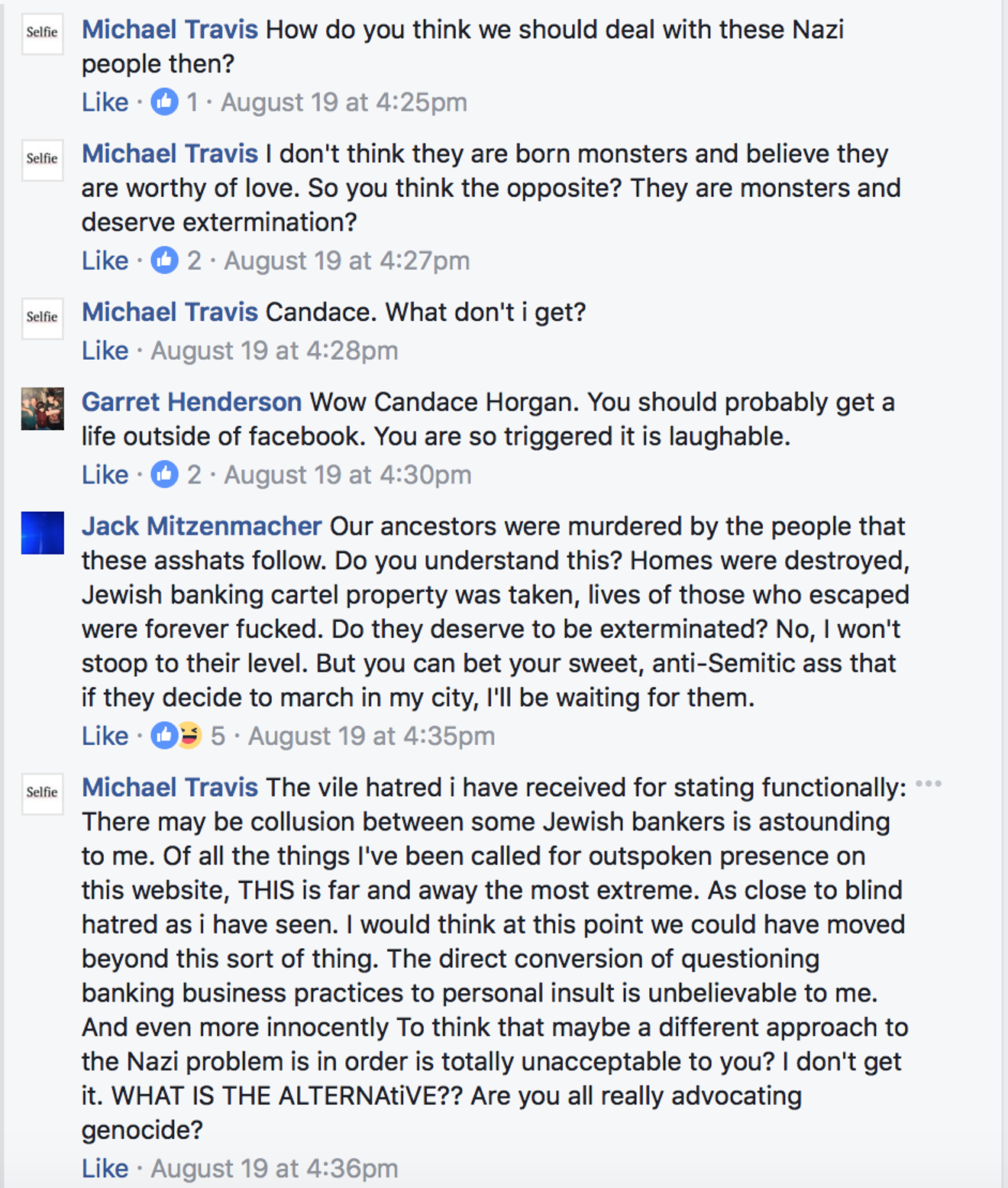 Michael Travis's Facebook page
The left has had an internal debate about the rise of white supremacy as of late: punch a Nazi, or love a Nazi? String Cheese Incident drummer Michael Travis decided to riff on the topic on his Facebook page, where he bashed anti-fascists for engaging in violent clashes with white supremacists in Charlottesville. But that wasn't all.

His diatribe took a bizarre detour from the usual pacifist repudiations of militant anti-racism when he rambled about his belief in "the Jewish banking agenda," and "the Zionist banking cartel." This conspiracy theory, which he described as "irrefutable," is one that anti-Semitic propagandists have peddled since the late 1800s and one that Adolf Hitler capitalized on mightily as he mobilized Germany to murder millions of Jews.

Travis wrote the following on Facebook on Friday, August 18:

"The Jewish banking agenda is fairly irrefutable ..do you think I'm anti Semitic for saying so? I don't. I have many many dear friends that are Jewish. (Even if they never read the Torah but that's a whole different topic) and have learned so much from them/is.. to not be allowed to notice trends in industry for fear of being called anti Semitic might be part of the way the Rothchilds and their cronies came to control the worlds monies. Of course their are other bankers that are doing evil money things. But the Zionist banking cartel is a thing... let me know if you can refute its existence."

After being asked, "Travis, WTF is wrong with you?," he replied:

"How am I evil all of a sudden? I abhor killing millions of people. I abhor the Nazi sentiment. I love Jews. Powerful powerful people. I think Trump is a living human piece of shit. I also think the Zionist Banking cartel is a thing. Any time anyone says Jews have done something in concert that is anything other than glowing citizens they get shat upon. Do you have evidence there isn't a banking cartel that is largely run by jews? I'll stop saying this if someone will present that evidence. And mind you, I am not bent on vilifying jews by pointing out this business cartel. It could have been anyone. [Smily face emoji]."

As more people rejected Travis's opinions, he wrote that he felt attacked and victimized for espousing peace, waxed nostalgic about back when hippies were pacifists, and blamed Hitler's rise to power on how nobody loved the Nazi leader.

"Hi everyone. I know I have caused quite an uproar here in the last few days. I have learned so much about privilege and oppression and the pain of a subjugated people. I have learned about myself. Know that I love everyone and my original post was meant simply to seek for fresh solutions to this abomination of a problem that has raised its head again here. That was truly my only goal: I am so sorry to those I have offended and will take what I've learned into all my future days. This new Nazi wave must be stopped. There is no doubt. I pray for a solution that is peaceful where education and humor and compassion can be our 'battle' cry. And th police can be counted on to incarcerate those that proliferate this madness. Please accept my apology and recognition of error."

And he came to Facebook again on Monday, to apologize again:

"I feel compelled to put out another apology and recognition of my extreme ignorance and shame regarding my previous statements about Jewish banking. I truly had no idea the banking thing was a central tenant of the Nazi agenda. Unbelievable I know. My understanding of history is obviously seriously lacking...I tend to hunt for conspiracys that mess with everyone's lives and found that and spouted out without due research or consideration for how my words effect others. I feel like scum. I have [been] nausuas for two days surrounding this. I don't know how to make amends enough. The internet is a powerful place where words never die and I would hate for those previous comments to be where our greater community places me... I have respect for all people and wish us all freedom and joy and abhor the Nazi agenda. If you feel my sincerity in this matter please help spread This message in places where you see people taking my previous statements as my stance on the matter.
Humbly
T"

While many fans have reached out olive branches and forgiven him, others are less than enthusiastic.

David writes: "While I appreciate that you at least didn't give a 'I'm sorry if you were offended' apology, I still don't think you get what was wrong with your post.

"The problem wasn't that you weren't sure if Antifa had the right tactics," he continues. "That's something about which we could have a valid debate. Rather it was that you went on a bizarre rant using untrue Nazi propaganda about Jews. When called on it you double downed. Then you triple downed. At one point you got actively mad that you weren't allowed to attack Jews without getting pushback.

"This is a 'philosophy' that has killed millions and you were spreading it. That's not a weird misstatement of 'the new Nazi wave must be stopped.' That's doing their work for them. You need to sit down and think about what you think you know and see if there's actual evidence for it, or you're going to continue to slander people and do harm."

String Cheese Incident has so far been silent about Travis's remarks, and he has not responded to Westword's messages for comment.