“If you were to turn on the Top Forty, you wouldn’t hear a single interesting idea,” he says. “All the same ideas are being regurgitated over and over again.”

Still, Weeks writes pop music. And he sought to write Satisfy Me, which drops July 16, as a catchy, un-ironic pop record that’s “all meat with very little fat." In contrast to most pop, he says, his music explores themes such as politics, death, a sense of home, and yes, that genre staple: romance, which he weaves through bigger issues.

“It was a challenge: Can I use interesting ideas in a pop song without changing the pop nature of it?” he asks.

Weeks has tried to write pop music for artists ranked on national music charts. In 2018, he ghost-wrote a couple of songs for Shawn Mendes. But he found the job taxing because of the amount of effort he put into writing verses and his low success rate selling songs. Overall, he became disenchanted with an industry that appeared to choose ease over depth.

And it's not just pop music that he sees taking the easy route. Last spring, Weeks saw a Netflix social media blurb enthusiastically promoting the renewal of "an easy-to-make reality-TV show, which they produce and release on their own platform,” he explains. To him, it represented a greater creative failure: poor-quality mass media.

“Needless to say, I became depressed,” he says. “We want things to be good. Why aren’t we questioning this more?” 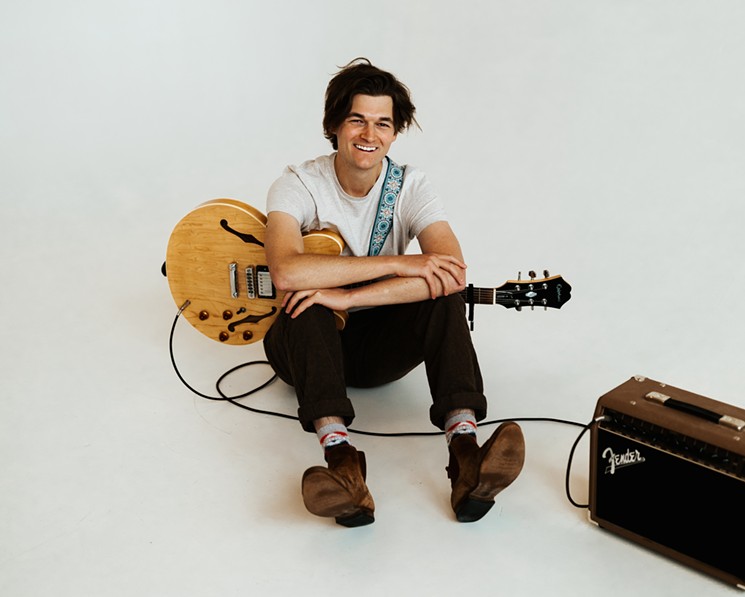 Teddy Weeks is primarily a studio musician, but he has hopes of adapting his songs for live performance.
mackrophotography
Instead, with Satisfy Me, Weeks turned inward for lyrical content. He mined the grief of loved ones in “this too shall pass" and reflected on the sad state of mass media in “satisfy me."

Along the way, he aimed to maintain a pop sound. “I genuinely like pop music. Historically, too, it reaches a lot of people,” he adds. These days, he looks up to artists including Jorja Smith and Bon Iver, but he also draws influence from non-traditional charting artists such as Father John Misty, Shakey Graves and even the Talking Heads.

Weeks was fascinated by Talking Heads frontman David Byrne's 2012 book, How Music Works, which tells the musician's story and explores music theory and history. The author's discussion of architecture’s influence on genre moved Weeks to study physics and music at Colorado College.

Weeks’s interest in how rooms affect acoustics informs his own production. He’s a piano and synth player, producing his songs on computers, trying “to find a balance between acoustic and synth sounds,” he explains.

His songs, he says, are created for car speakers. “The album’s length is the drive from Denver to Boulder. That was kind of the idea, that someone could listen to it during their drive."

And he hopes the experience of listening makes them feel something authentic.

Find Satisfy Me on Spotify. Learn more about Teddy Weeks on his website and through his social media.
KEEP WESTWORD FREE... Since we started Westword, it has been defined as the free, independent voice of Denver, and we'd like to keep it that way. With local media under siege, it's more important than ever for us to rally support behind funding our local journalism. You can help by participating in our "I Support" program, allowing us to keep offering readers access to our incisive coverage of local news, food and culture with no paywalls.
Make a one-time donation today for as little as $1.
Claire Duncombe is a Denver-based freelance writer who covers the environment, agriculture, food, music, the arts and other subjects.
Contact: Claire Duncombe