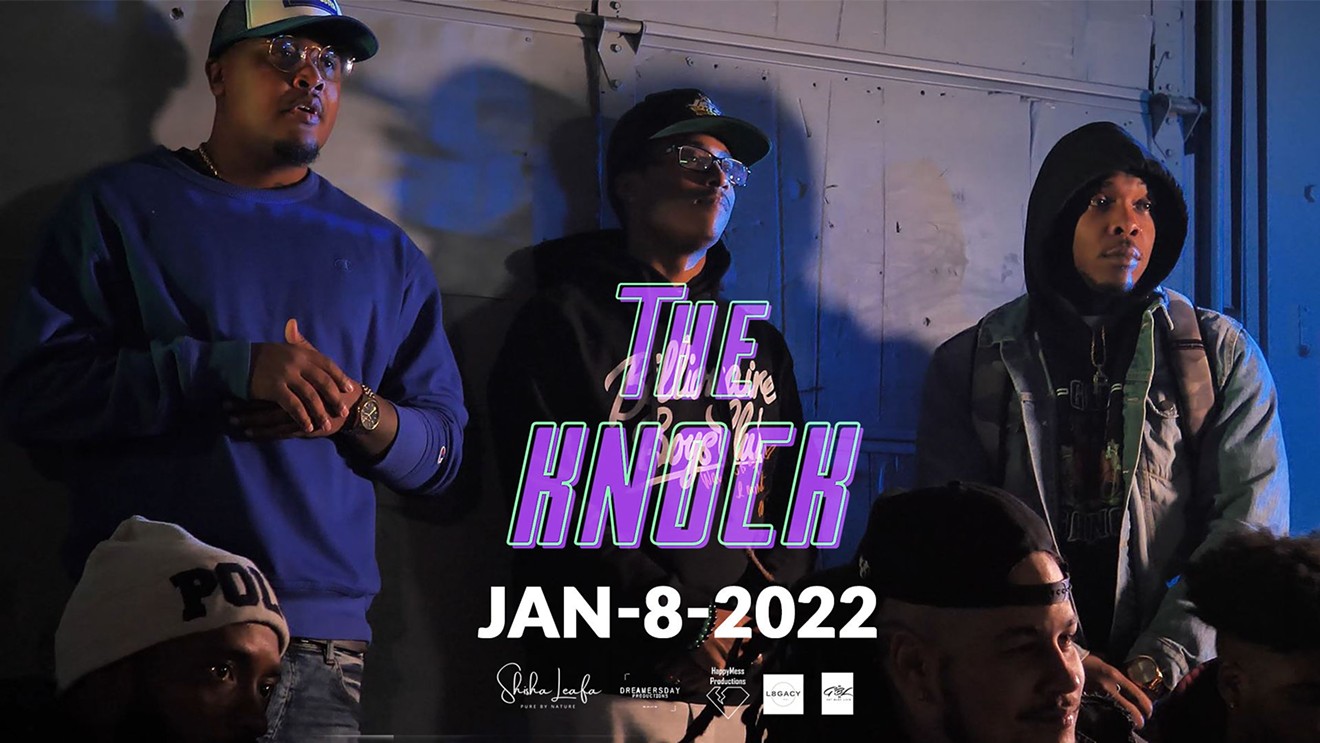 The Knock, a new monthly hip-hop house party, returns Saturday, January 8th. L8GACY LLC
In November 2021, Kelsey O'Sullivan brought a new kind of party to Denver: a hip-hop showcase with a house-party vibe called The Knock. On a Saturday night at River Bar and Gallery, big names in Denver's hip-hop scene rubbed elbows with up-and-coming artists; audience members and performers mingled in a couch-filled lounge; and Denver's hip-hop community came together in an unprecedented way. For O'Sullivan, producing the Knock through her LLC, HappyMess Productions, was the culmination of years of working hard and dreaming big.

"At about three years sober, I decided I had a second chance at life and really wanted to figure out what I actually wanted to do. Live music is where I really wanted to work, so I took an internship here in Denver, and that's what I've been doing for about the past four years. Any opportunity that I had, I said yes to," she says. "The Knock caught me off guard when everything came together, but I've never felt more comfortable in the chaos and uncertainty. Because the passion is there, and that changes everything."

When COVID first hit, O'Sullivan was working as a tour manager for a DJ in Denver. The Nebraska native, who moved to Colorado thirteen years ago, used that time off to conceptualize the Knock. Along with co-producer Eryk Fisher and a packed roster of artists and sponsors, O'Sullivan is hosting the Knock's second event on Saturday, January 8, at Get Busy Living Studios.

"I wanted to create an intimate hip-hop house party. SoFar Sounds was kind of the inspiration for it. We wanted to build the brand so much that people would buy tickets not based on the lineup, but based on the event. So then we could get really creative and give space to artists who maybe don't have the biggest pull and need a little bit of a platform to stand on," O'Sullivan says.

Kelsey O'Sullivan, founder of the Knock and HappyMess Productions, at November's event.
L8GACY LLC
O'Sullivan met Fisher while they were both attending the Detroit Institute for Music Education. "Specifically in the music industry, who you know is so important," Fisher says. "It's wild to think that the largest live-entertainment company is based in this city and state, yet nothing major with hip-hop happens in this state. We're dead-center: Why not have everyone from every other area come here? We want to build up the artists now, and the artists to come. The fact that there's so many hidden gems, it's wild to think that we don't have a platform where everyone is learning from one another, learning from industry professionals and expanding up on that here, locally. Kelsey created that platform with the Knock."

Uniting a community fragmented across the city is no small task, but O'Sullivan and Fisher had the experience, industry knowledge and sheer guts to make it happen. Their risk paid off.

"Before we even sent out the first booking offer, I just sat down and wrote a list of all the people I would like to book in Denver. And then every time we do another post or do another event, people are like, 'I'd love to be part of this,' so we just continue to add to that list," says O'Sullivan.

Part of their strategy is curating a lineup that keeps everything local, including event sponsors and vendors. They hope that connecting local businesses and local artists can potentially lead to mutually beneficial partnerships in the future. From a marketing standpoint, Fisher explains, "there are a lot of companies that want to be part of cool shit. It's really just about cold calling. Put together a solid proposal, and reach out to different companies that align with that specific theme and the artists that we have. Also taking into account that COVID shut so much shit down, even just to get your brand out there, around people, is something that some brands are looking to do. To have your name on things, for brand awareness, is extremely helpful."

An equally welcoming environment for artists, vendors and audience members is the backbone of the Knock, which is why O'Sullivan and Fisher wanted it to feel more like a house party than a club setting.

"I feel like when you go to the club, or when you go to a show, you bring a certain ego with you. You dress a certain way, you present yourself a certain way. But when you're at a house party, you're with your people, and you're really comfortable. That's the kind of atmosphere that we wanted to create for the artists and attendees," says O'Sullivan. "Because we're a house party...we can't just roll up into any venue and make it work. That limits us a bit, but I'd like to find four or five venues that we can bounce between so that each show has a little bit of a different vibe."

The Knock's debut event had an incredible turnout.
L8GACY LLC
But the Knock is more than just a house party — it's also a crucial educational platform for music artists and creatives of all types. "It's not just about the attendees, it's also about the artists included," Fisher says. "We are fans of music, but we both worked in artist management, so we know what that side of it is. It's very rare that you walk into an event where you're headlining or performing and they provide more than just what's on your rider and monetary payment."

After their November show, Fisher and O'Sullivan brainstormed ways to add more value to the experience for artists, and came up with the idea of holding a studio night prior to each event where artists could meet each other. "I was like, 'I'm putting you all in a room, we're all going to take some photos, we're going to meet each other, and we're going to go into the studio and see what happens,'" O'Sullivan says.

After leaving the studio night, all the artists walked away with enough content to put together a press kit.

"The studio night was to provide content for the artists so that they have pictures, they have video, they have a cypher now. They had a whole photo shoot here, as individuals as well as in a group, and then the videographer came through, talked to all the artists, asked them a little bit about where they were from, and things of that nature," says Fisher. "It didn't necessarily have to be about the Knock, per se. They can always use it — it's not going to have a logo in the bottom saying 'The Knock.' It's strictly for the artists." It is precisely this kind of marketing advice that the Knock hopes to disseminate among the creative community, even beyond music artists. Fisher and O'Sullivan want to invite all sorts of creative folks to join in on studio nights, so that even those brand-new to their craft have opportunities to practice, learn, network and build portfolios.

"I've been told in the music industry a lot, 'Your heart is too big.' And I'm like no, but I swear it all can work!" says O'Sullivan with a smile.

"To go into your day both personally and professionally with intent to give, it makes things a hell of a lot easier," Fisher echoes. "For us, specifically, it fills our cup way fucking more. We might make money in the process if we can, and when we get there, it will taste that much better because there weren't any bridges burned in the process. All we've done is enhance the industry and the local community simultaneously, through something we love, which is music. You don't have to do bad business to get where you want to go."

If you can't make it to the Knock this Saturday, don't worry — there are many more events in the works. Eventually, O'Sullivan hopes to open HappyMess Studios, a recording studio and event space, and re-create the Knock in other cities.

"We want to build every single time. We want to look and say, 'What did we do well? What did we not do well?' We'll even ask the artists, 'What can we do better? How can we communicate with you better?'" says O'Sullivan. "So it may look a little different every time, but that's what we want. We want the vibe to be different every time. We're learning as much as they are."

Fisher agrees: "The education aspect is going to be expanded on as well, so studio nights are going to be bigger and longer, and photo-shoot content days are going to come, then master classes. I don't want to give away all the secrets, but there is so much stuff that she has in the works."

The Knock, 7 p.m. to 12 a.m., Get Busy Living Headquarters, 1400 Oneida Street. Tickets are $20 to $25. A Meazy, God Remember, HA$H, Myell Westcoast, PG and DJ Thred Savage will perform. Vendors include Good Eatz and Shisha Leafa.
KEEP WESTWORD FREE... Since we started Westword, it has been defined as the free, independent voice of Denver, and we'd like to keep it that way. With local media under siege, it's more important than ever for us to rally support behind funding our local journalism. You can help by participating in our "I Support" program, allowing us to keep offering readers access to our incisive coverage of local news, food and culture with no paywalls.
Make a one-time donation today for as little as $1.