The Simon & Garfunkel Story Is Coming to Denver 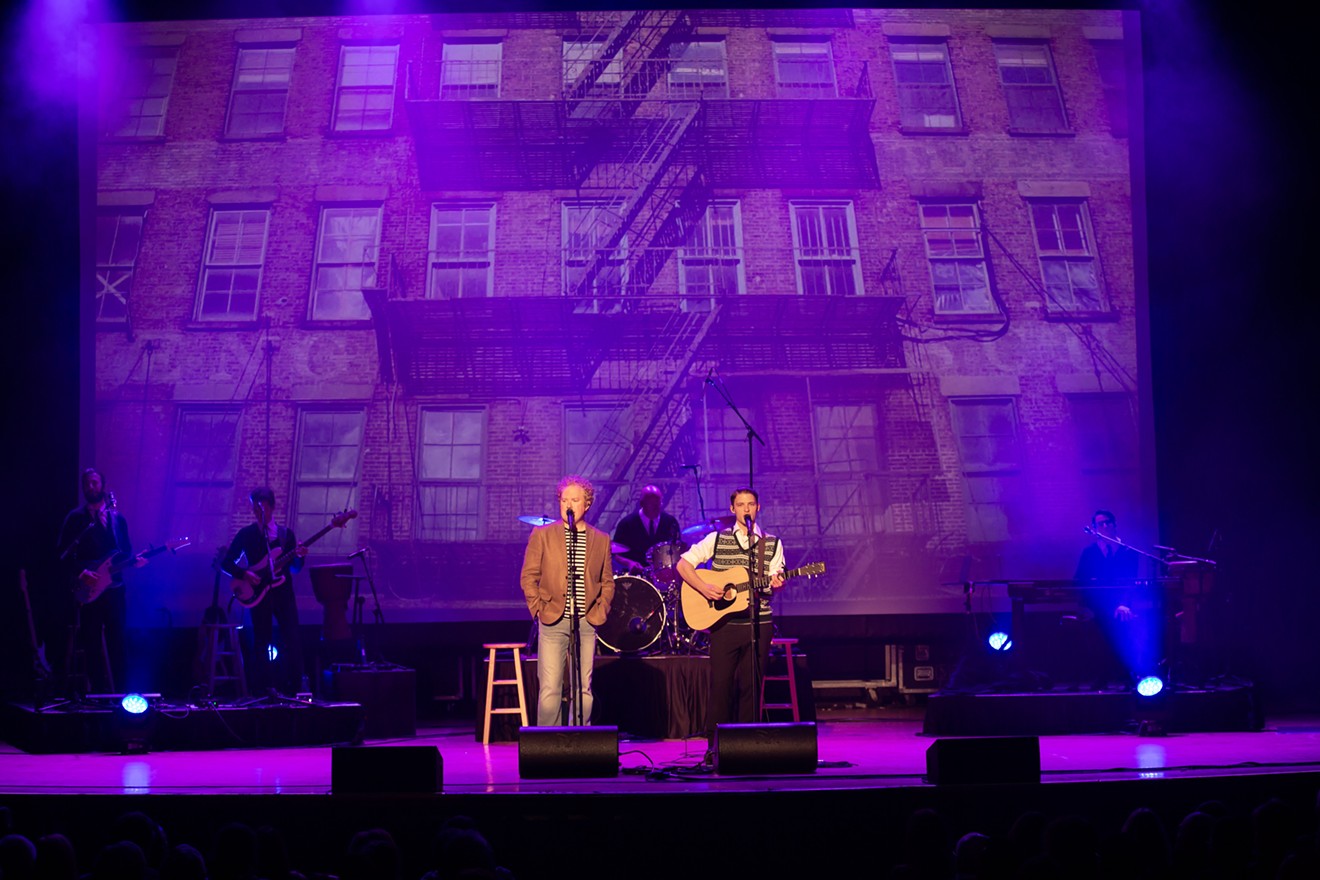 Paul Simon and Art Garfunkel may not be playing together anytime soon. But a play about the duo's time together is giving Denver fans a chance to travel back to the poetic crooners' glory days.

The Simon & Garfunkel Story will be in town on October 15 at the Paramount Theatre as part of the production's 35-city coast-to-coast tour. The show portrays the early years of Simon & Garfunkel when the two of them were still best buds and were captivating sold-out crowds across the country.

Westword spoke with Taylor Bloom, the actor playing Paul Simon in the show. Used to acting and singing, Bloom is finally getting a chance to play guitar on stage and is enjoying his second time touring with the show as Paul Simon. Here's what he had to say:

Westword: When did you first listen to Simon & Garfunkel?

Taylor Bloom: One day, when I was twelve or thirteen, my oldest brother Dan was playing the song "America," and I heard the part of the song where Paul plays a chord that's out of the scale that the song starts in. And I had just never heard music where someone did that, and it totally worked. And it was kind of like seeing a new color. I was so amped by it. It amazed me. And then, after that, I knew most of their big hits. But through this show, I've gotten to know their songs that fall by the wayside. They've got some really awesome material that never really amassed great amounts of commercial appeal, but it's just really good music.

What made Simon & Garkfunkel so special in the early years?

I think it has to do with Paul's songwriting. He writes lyrics that are specific enough to him that they're universal to the human experience. And he just writes some of the most catchy tunes. And Art Garfunkel, it's my understanding that he was in the driver's seat for writing his harmonies to everything. And he had a very intricate ear for that sort of thing, and he was so skilled at accentuating the melodies that Paul had already written. That, plus the fact that in their early years, you see footage of them playing together as young guys having so much fun. They're having the ride of their lives. Sort of early on, when they were doing "Wednesday Morning 3 a.m.," when Sounds of Silence came out, they were just on the upswing before it all got enormous. They were just having the best time. And I think that has a lot to do with it.

Do you think that Paul Simon was the brains behind the songwriting and that Art Garfunkel just had this beautiful voice and was talented in terms of harmonizing?

I think that's pretty close. As far as I know, Paul Simon is credited with writing every single Simon & Garfunkel song, except, I believe, Art Garfunkel contributed to the lyrics on a song called "For Emily, Whenever I May Find Her." Aside from that, Paul Simon did write all of the music himself. But Art Garfunkel created all of his own vocal lines. The funny thing is that they change from recording to recording. If you see a live performance of them, or if they're playing on some talk show, they'll play the same songs, and they'll sing it differently. They sing it together every time. But, it's like, right before they go out on stage, they say, "Hey, let's do this tonight." It changes constantly. 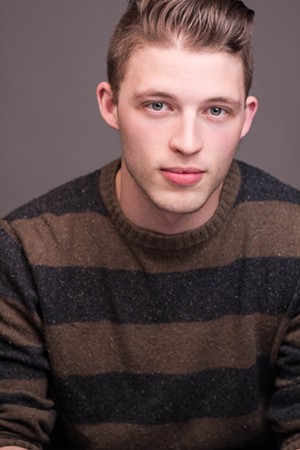 Taylor Bloom, the actor playing Paul Simon.
Courtesy of Andy Coscarelli
A lot of amazing bands and musical combos break up. It's kind of inevitable. What led to their breakup?

You just said it. It's inevitable. They're two very independent, creative, headstrong individuals. Obviously, I don't have any particularly special window into the intricate details of their relationship, but if you put all of those ingredients in the pot together, those two kinds of people, plus enormous amounts of fame, and great attachment to the music they're creating and all this pressure, I think you're exactly right in saying that in some way it's inevitable.

But they did come back together for a short period of time.

Yes. I just read a biography of Paul Simon. And if my understanding is accurate, I guess that they've tried on multiple occasions to put their issues to bed and get together to perform. And I think, it's just that they've got a very long-term relationship, and there's a lot of skeletons in the closet, and it's really difficult to forget stuff like that. When you've been deeply wounded by someone and you try not to think about it and put it aside, it gets the better of you.

He is. He just played his final show ever a few weeks ago. It's funny. Our director went to go see it. It was in Queens.

Has there been any communication between you and Paul, or has he seen the show?

I personally have not communicated with him and, as far as I know, neither Paul nor Art have seen our show. They do know about it, and they have given it the cursory nod. As far as I know, they don't really care. They're kind of just like, "Do whatever you want." Because I don't think either one of them wants much to do with it, which is pretty sad. But that's kind of the reason we're doing what we're doing. Because our show is not about Simon & Garfunkel breaking up. We're trying to celebrate the time that they were together, focus on the music they made when things were good between them.

I think the album Graceland is one of the best albums of all time. What's your perspective on Paul Simon's solo career?

I would totally be inclined to agree with you. Working on this show got me into listening to Paul Simon's solo stuff, and it's been a real treat. There's a portion of the show where our band, which is just world-class, they play a medley of a few of Paul Simon's huge solo hits, like, "You Can Call Me Al," "Me and Julio Down by the Schoolyard." And it's just sort of a medley together. But the show itself is more focused on Simon & Garfunkel particularly.

What would you say to possible audience members about why this show is worth coming to?

Well, it's an interesting question given the past few weeks, because Paul Simon played his final show. I think the answer is probably, Simon & Garfunkel don't perform together anymore and our show does a really good job of emulating and paying tribute to the music they created. And also telling the story of what was going on at the time the music was being made. We talk about what was happening in the world, the societal and cultural changes that were taking place. And I think, for anyone who is a Simon & Garfunkel fan, it will remind them why the music is so important.

What about for younger people who maybe aren't as familiar with their music? Do you think the show will still be interesting and fun for them?

Oh, totally, because we really construct the narrative of Simon & Garfunkel — their early Tom & Jerry days all the way to their concert in Central Park in the early ’80s — and it's all seen in this historical context of this is what was going on and this is why the music mattered. And it's very present.

We had a young kid in the audience the other day. It was clear his parents had brought him there, and he wasn't really on board with the show. And I'll tell you what, by the end, our vocalist who does the Art Garfunkel stuff sang "Bridge Over Troubled Water," and the kid was clapping and shouting from the audience. So we won him over.

It's easy to forget that performers can see what's going on in the crowd, and you can see if people are into it or not.

Absolutely. And that's also a treat. Every single show we've had thus far, there's always at least one lady out there who is like, this is her music. She'll be dancing in the aisles and singing along with every song. It's a lot of fun.

The Simon & Garfunkel Story, 7:30 p.m. October 15, Paramount Theatre. Tickets, $35-$65, are available here.
KEEP WESTWORD FREE... Since we started Westword, it has been defined as the free, independent voice of Denver, and we'd like to keep it that way. With local media under siege, it's more important than ever for us to rally support behind funding our local journalism. You can help by participating in our "I Support" program, allowing us to keep offering readers access to our incisive coverage of local news, food and culture with no paywalls.
Make a one-time donation today for as little as $1.