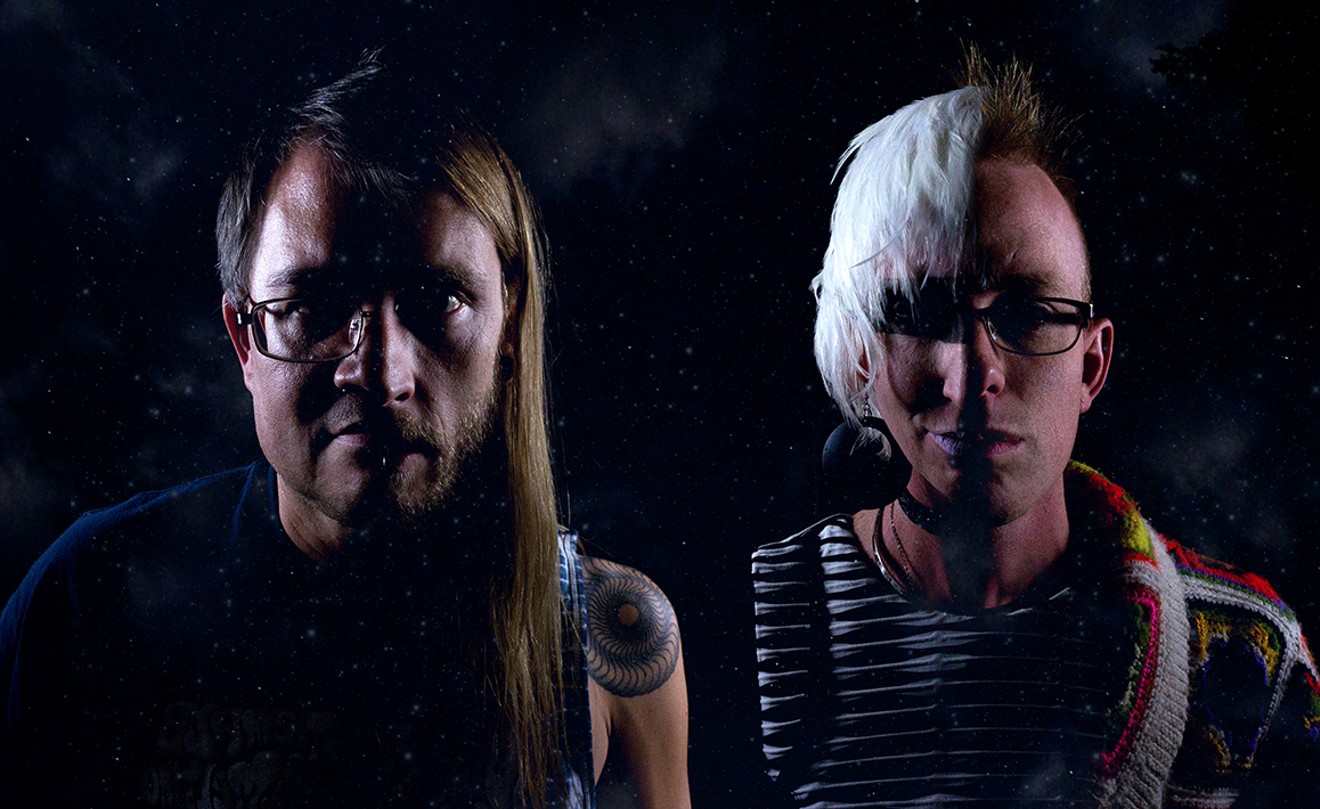 Pythian Whispers will release a new album, Lullabies for the Way of St. James, on October 5, with a show at Rhinoceropolis. The album, some seven years in the making, will be available as a pendant containing a download. David Britton
Even music journalist and historian Tom Murphy — half of the musical duo at the heart of Denver’s Pythian Whispers — has a hard time putting into words exactly what it is his band does.

“When I first heard stuff like that, I was like, ‘I don’t understand how people make anything like this,” he says. “I grew up listening to Tangerine Dream, and it didn’t occur to me that real humans made that music.”

For the last decade or so, Pythian Whispers has been a constant — if not baffling — force in Denver’s underground music scene. There’s no trace of the typical accoutrements that surround a band. The bandmembers don’t use drums or even guitars — at least not in the traditional sense — in the sounds they make. They employ synthesizers and disparate electronic devices, things like rewired and augmented electronics or toys, to create swelling, expansive soundscapes that fit only the loosest definition of a song. It’s weird, unsettling and almost impossible to describe, and Murphy seems almost entirely uninterested in changing that.

Pythian Whispers’ new album, Lullabies for the Way of St. James, out October 5, is a sprawling and deceptively dulcet crash course in non-traditional musicianship — a cross between the eeriest sci-fi soundtrack and a new-age meditation album gone awry.

“I play guitar all over the album,” says Murphy. “But unless you know it’s a guitar, you don’t necessarily know.”

Murphy isn’t being contrary, at least not entirely. His way of writing songs comes from boredom with traditional music and a desire to push the limits of conventional instrumentation.

“When people get a guitar in their hands, they think, ‘Well, I could play a regular thing,’ and I had already done that,” he says. “I was already into ambient music or whatever, but I remember being like, ‘I can’t play rock music anymore, so I’m going to do this weird shit you’re not supposed to do.’ It’s not conventional to hit the strings and then turn the volume up and create mass with distortion and sculpt that to make...a tone — instead of trying to make a chord — and manipulate it that way.”

Pythian Whispers began in 2009, when Murphy found himself writing more songs than his band 900 Ancestors could use. For two years he operated as a one-man band until his friend David Britton suggested they jam. Shortly thereafter, the duo played an open-mic night at the Meadowlark Bar.

“We wrote two songs and played both of them that night,” says Murphy, who played guitar at that first show. “Dave had, like, circuit-bent devices, like a toy that would make weird sounds, and he would put it through processing or a pedal or something like that. So I just put in two reverse delays and a fuzz pedal, a ProCo Rat, and it would do this weird warping, crazy sound, and put it through a Roland JC 120, which you should never take into the Meadowlark, because that’s loud enough for any venue, really. But it was so disorienting, and they were like, ‘That was really good.’ It wasn’t just people who are into indie rock or folk or whatever. These are people who are into experimental music. There were people that we know who hang out there, and they were like, ‘Oh, my God. What are you guys doing?’”

In the wake of what felt like a victorious show, Murphy was faced with the realization that his musical journey had been irrevocably altered. He’d played trumpet for eight years, studied music theory and thought he knew what he wanted as a musician, but after playing with Britton, he was no longer so sure.

“When I started playing music, I wanted to play whatever the guy playing the low notes in Joy Division was playing,” says Murphy. “So I picked up bass and started playing, then switched to guitar and synthesizer. But playing with David, who has no musical training at all but has a good internal sense of sound and rhythm and whatever, he’s a weird, mad-scientist inventor kind of person who will circuit-bend all kinds of stuff. We have found a way to work together.”

With the addition of bassist Brad Schumacher (later replaced by Harmony Fredere) and internationally renowned film director Charles De Graaf providing various noises, synth, samples, bass and vocals, Pythian Whispers became a full-fledged band. The group then began the process of recording an album — just not the one being released this month.

“We recorded it, but we could never make it back down [to Monument] to mix it,” says Murphy. “The timing never worked out, and Charles is out of the country pretty regularly working on a film. Everything was in disarray, so we’d play all these weird shows where Charles couldn’t be there, and some shows where no one could be there but me. It felt like everything was on hold.”

Eventually, he says, it became obvious that De Graaf wasn’t coming back.

So the original album was scrapped, at least for now, and the new songs became the framework for Lullabies for the Way of St. James. Hearing the band’s recorded material and knowing the instrumentation that's used, it’s hard to picture how the music is made in a live setting. Murphy says the band just falls into a rhythm, something he describes as both intuitive and otherworldly.

“It’s a simple but weird rhythm, and you kind of have to internalize that,” says Murphy. “It’s never always exactly the same, and that doesn’t matter. The music isn’t about being exactly note for note. Like, if I was in a pop band, [there’s] not a lot of wiggle room there.”

The best comparison Murphy can make, he says, is to the way jazz musicians work together.

“People come to see us, and they’re like, ‘How do you guys play like that, get that precise together?’ Because we play together all the time. I don’t want to compare it to jazz, because it’s just not fair to jazz, but the best jazz bands are people who are good at listening to each other and synching in that way. The mood and the mode and the atmosphere matters more than, like, ‘Did we nail the precision there?’ It’s about listening.”

Pythian Whispers plays an album-release show with RARE BIRD$, nervesandgel and SOMNILOQUIST at 8 p.m. on October 5 at Rhinoceropolis, 3553 Brighton Boulevard. The new album, Lullabies for the Way of St. James, will be available at pythianwhispers.bandcamp.com or at the show as a cassette with two bonus tracks or on a limited-edition pendant with a download.
KEEP WESTWORD FREE... Since we started Westword, it has been defined as the free, independent voice of Denver, and we'd like to keep it that way. With local media under siege, it's more important than ever for us to rally support behind funding our local journalism. You can help by participating in our "I Support" program, allowing us to keep offering readers access to our incisive coverage of local news, food and culture with no paywalls.
Make a one-time donation today for as little as $1.