A new sign with the original Wax Trax logo was recently hung above the store's door. Jon Solomon

Pete Stidman began working at Wax Trax when he was twelve years old, alongside his father, Dave, who has owned the Capitol Hill record store with Duane Davis since 1978.

"My dad is working six days a week," says Pete. "I'm working on setting things up so he can take it easier, but he loves the job and will be hard to pry out of here. My dad is responsible for how amazing the used store is. Probably one of the biggest collectible record brains this side of the Mississippi. Duane is using his days here to focus on the live music, social media, etcetera, and we're hoping to build on that stuff."

As a teenager during the ’80s, Pete wasn’t “one of the cool kids” who played in punk bands.

“I was a starry-eyed kid just kind of lurking on the wallpaper,” he says.

Back then, he recalls, Wax Trax was a place to find out about live music.

“If you wanted to find out where the cooler shows were, you had to come and look at the fliers and the window,” he says. “I would come pretty much every weekend when I was fifteen, sixteen and seventeen, looking for the cool shows to go to. And then I’d just go straight over there and try to slam-dance or something.”

After spending the past two decades in Boston — working as a photographer’s assistant and a reporter, as founder of the nonprofit Boston Cyclists Union, and as a city planner — Pete moved back to Denver in March 2020 to work at Wax Trax again, this time as general manager. Since Davis has been semi-retired for the past few years, coming in only a few days a week, Pete has taken over the business end of things, including accounting.

When the store was closed for a month and a half at the start of the pandemic last year, Pete used the time to restore Wax Trax to its ’80s layout, when new vinyl was sold at the corner store and used records were at the other Wax Trax storefront a few doors down.

Pete and Wax Trax staffers moved all the new vinyl from the vinyl shop to the corner storefront. They also removed all the CD racks that were behind the counter, hiding the wall. Pete even lugged the old Coke machine back toward the front of the store. Also, there’s a new sign above the front door with the same Wax Trax logo that defined the shop in 1978. Pete thinks the last time a similar sign hung there was in 1989. The newly reorganized Wax Trax.
Pete Stidman
“If you were here before COVID and now, it's completely different,” Pete says.

In May 2020, Pete and his girlfriend started updating the store’s website for sales, as it wasn’t previously set up to sell the store’s inventory.

“We’re still not even close to having all our inventory on it, but it helps,” Pete says. “And especially when we were closed. That first month we were closed, the first thing we put on [there] was Wax Trax T-shirts. We had a normal business month, but it was mostly like T-shirts and people just buying things because they wanted to support us.”

With a surge in vinyl sales, particularly over the past few years, record sales are up considerably at Wax Trax. Since business has been good recently, Pete is updating more around the store, like adding a public restroom and having some brickwork done, getting the place set up for the next several decades.

The original Wax Trax was founded in 1975 by Jim Nash and Dannie Flesher, who went on to launch Wax Trax! Records in Chicago and the industrial and punk label of the same name. Stidman and Davis have owned the Denver store for more than four decades.

In that time, Wax Trax has seen some challenging years. Davis says that 1996 was its best year in terms of gross sales. And then the digital-music revolution started eating into the store’s profits.

“Dave and I were just absorbing body blow after body blow with the store declining,” Davis says. “And we were even thinking, ‘It's time to count up the change and get out of this crap.'” Wax Trax before the reorganization.
Pete Stidman
But as vinyl sales started to increase in the early 2000s, so did Wax Trax’s business.

“Things were really starting to pick up, and we were thinking that was kind of a snowballing,” Davis says. "We were ready for it, because unlike many other stores, we never stopped doing vinyl. We always had one of our stores just devoted to that. And Dave is a vinyl addict of the most incredible sort; he just can't stop buying it. And so we had a store full of vinyl that nobody had been buying...and then they started buying it.”

And through the pandemic, people continued to buy vinyl — not just at Wax Trax, but at other local stores, like Twist & Shout and Angelo’s CDs.

“As sad and grim as the lockdowns were and the COVID crisis has been, there is no question that people have looked for something that they could do that felt normal,” Davis says. “One of the safe things to do turned out to be go to a record store and buy a record. Buy something that you can take home with you and listen to and feel like it was supporting you in this crisis.”

“We've been getting just beaten up over and over and over,” he adds. “And today we're really seeing a resurgence of people wanting to have music. That connection with vinyl provides that. It's a wonderful place to be.”

Davis, a self-described old hippie who went to college in the ’60s, has lived through a few music revolutions, from 1950s rock and roll through the ’70s rock revolution and the dawn of punk later in that decade.

“The first time we heard the word ‘punk’ applied to music — far from scaring us, it actually attracted us to it, because it had all those connotations of the strange, the dangerous, the sexually ambivalent," Davis says. "Just everything about it was the thing we were already primed to be ready for in music, coming around on what was called, at the time, 'the new wave.'” 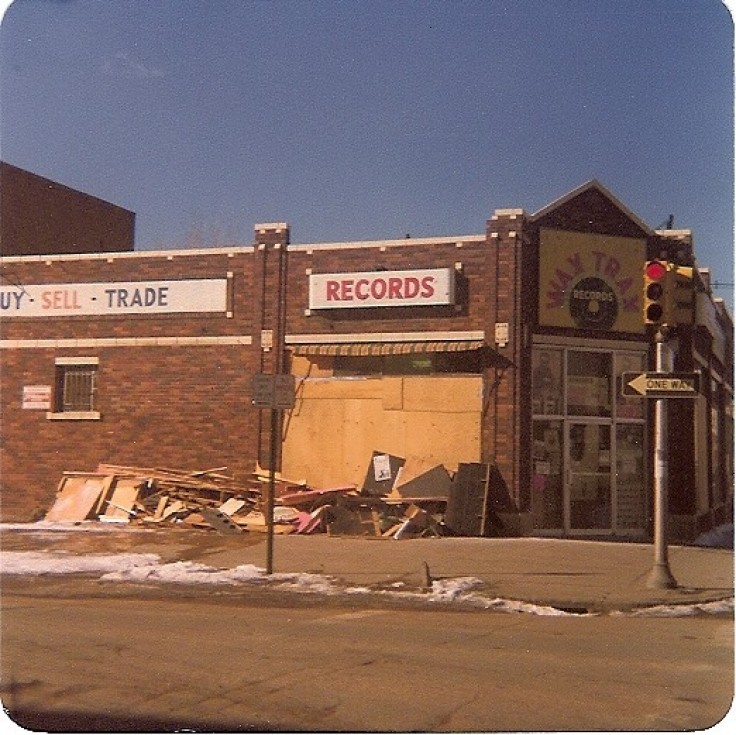 Wax Trax in the early days.
Courtesy of Pete Stidman

In the late ’70s and early ’80s, Wax Trax was one of the only stores in Denver importing punk and new wave from England. With Pete's restoration of what the shop looked like back then, he hopes younger vinyl buyers will get a taste of the glory years.

“Reorganizing the store is always traumatic,” Davis says. “As much as Dave and I are on the side of revolution, we’re also, just as much as anyone else, fearful of change. The store has gone through so many more moltings, like a fucking caterpillar.

“We're constantly growing new cocoons and molted into this or that. We’ve had stores in Boulder. We've had stores across the street and all up and down our block," he continues. "And when Pete took an interest in coming back in, Dave and I had sort of fallen into a rut. I believe that Pete has brought in an excitement and new energy and revival sense to what we're doing.”

While the owners have tried to capture the changes in music, they're eager to see how the shop evolves in the future.

“Dave and I are getting a little bit long in the tooth for doing that,” Davis acknowledges. “I love so many different styles of music, as does Dave, but sometimes I think that our ears are falling out of tune with what's going on. We need that new life and new energy to come in and give us a kick in the pants.”
KEEP WESTWORD FREE... Since we started Westword, it has been defined as the free, independent voice of Denver, and we'd like to keep it that way. With local media under siege, it's more important than ever for us to rally support behind funding our local journalism. You can help by participating in our "I Support" program, allowing us to keep offering readers access to our incisive coverage of local news, food and culture with no paywalls.
Make a one-time donation today for as little as $1.