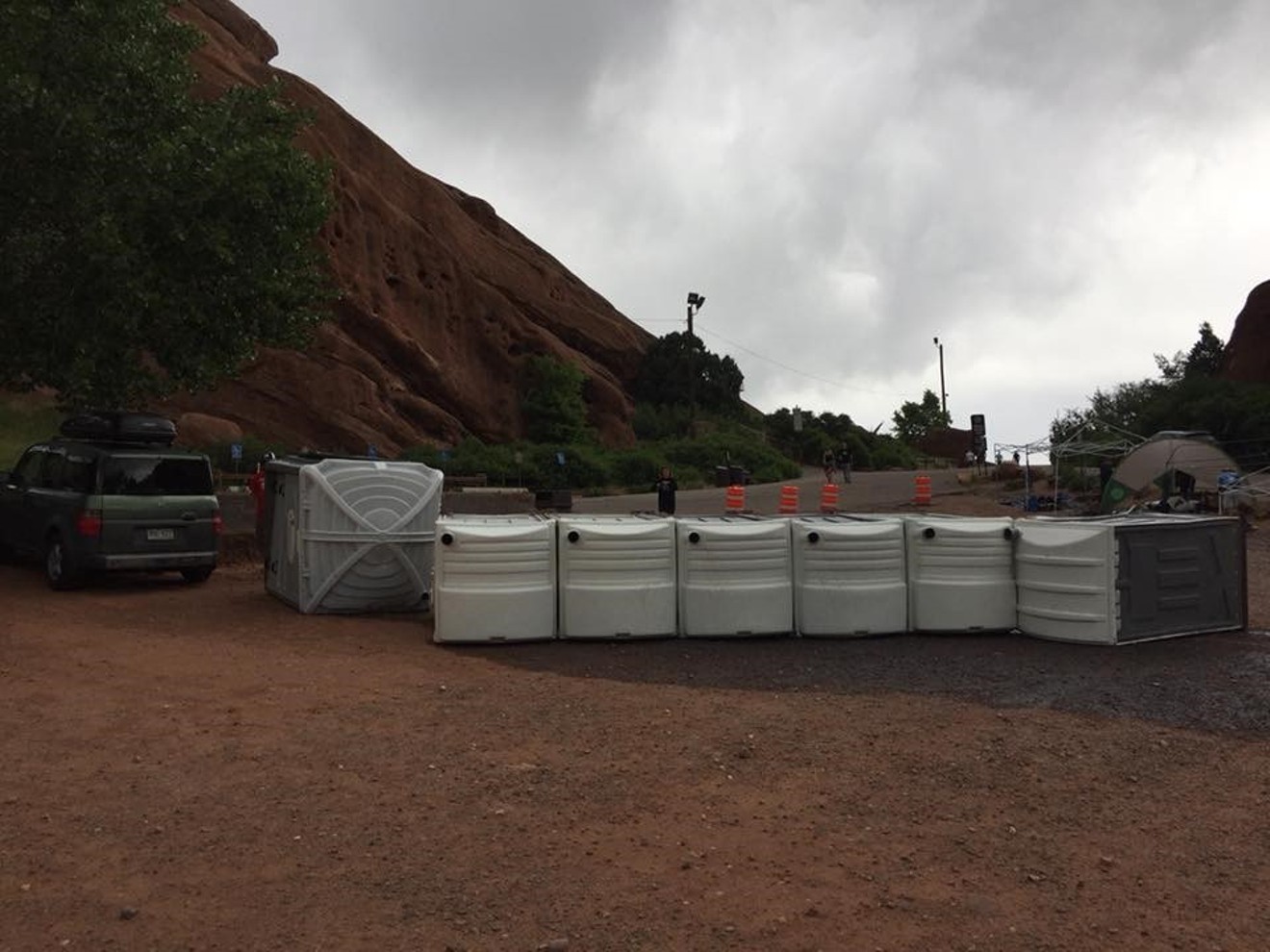 These porta-potties tipped over after taking flight at Red Rocks. Courtesy of Andrew Mowery
Music fans at Red Rocks can withstand a lot. After all, they've been sucker-punched, rocks have fallen on them, they risk dying while hiking after shows, police have tear-gassed the venue (albeit decades ago), and people have been shot.

But few would have imagined that flying porta-potties would be an issue.

Still, at the Widespread Panic concert on June 22, a microburst hit the Upper South Parking Lot outside the amphitheater, sending six portable toilets flying fifty feet across the parking lot, according to Andrew Mowery, a 51-year-old self-proclaimed ambassador between fellow Widespread Panic fans and venue security.

One of the units slammed into his Honda Element, denting it. Human waste spread across the parking lot.

Mowery had been at the venue since around 6 a.m., long before staffers. He was handing out numerically ordered wristbands and helping organize a line of early-arriving fans so they could enter the concert safely. It’s a task he's taken on at 33 shows in thirteen years after he watched Widespread Panic fans stampede the gates, injuring each other as line-cutters scrambled for prime seats.

Andrew Mowery's SUV and the porta-potty that hit it.
Courtesy of Andrew Mowery
After the portable toilets took flight, he and others ran over to check to see whether anyone was still inside them; nobody answered. The group tried to lift the porta-potties, but they proved to be too heavy, so he found people working at Red Rocks and asked for help.

It took staff ninety minutes to show up to the scene, he writes in a complaint he sent to Mayor Michael Hancock, and when they came and heard what happened, "they were rude and abrasive,” he says.

Andrew Mowery says Red Rocks staff have appreciated his efforts.
Courtesy of Andrew Mowery
Mowery pleaded with security staffers to help out, but instead of lending a hand, an Argus supervisor told Mowery to contact Liberty Waste Management, the company that provides the toilets, he says.

Hours after the incident, workers finally came to move the portable toilets. Luckily, nobody was inside. The workers proceeded to clean the toilets with a power washer.

According to the complaint, that “exacerbated the biohazard by creating a feces and urine slurry that covered a large area where patrons both waited in line for use of the portable toilets, but also accessed the entire lot." Andrew Mowery has volunteered for years as a self-appointed ambassador between Widespread Panic fans and Red Rocks staff.
Courtesy of Andrew Mowery
Nobody bothered to secure the toilets to the ground, he says, and should another microburst have occurred, they could easily have shot to the heavens again.

“The lot remained unsanitized for the entire weekend, and the stench was strong into Sunday, when significant rains apparently spread the biohazard even farther across the lot than thousands of feet,” the complaint states.

After he raised concerns with Red Rocks staff, they retaliated against him throughout the rest of the day, he explains in a different complaint to the city, this one accusing Red Rocks staff of slander.

"Red Rocks employees slandered Mr. Mowery with an accusation that he was violating criminal law by selling wristbands to organize the line to preserve 'first-come first-serve' line integrity," he writes.

Mowery says he never sells the wristbands, which he buys for $100 each year, to his wife's dismay. He notes that before June 22, his interactions with Red Rocks staff had always been collaborative.

Widespread Panic performed at Red Rocks June 22 to 24, 2018.
Jacqueline Collins
In fact, in past years, city and security staffers have expressed their appreciation for how he helps controls fans and answers questions that would otherwise be lobbed at overtaxed security officers, he says. This year, he was eventually threatened with arrest if he spoke to Red Rocks and Argus staff, according to his claim.

His complaint to the city accuses Argus guards of being "verbally abusive" and holding back his well-organized group of fans while people who showed up late walked in first, securing the best seats in the venue.

After the three-day Widespread Panic stand, in which the stench from the spilled sewage was noticeable, Mowery says he has petitioned the city to secure the portable toilets at Red Rocks. He is also seeking compensation for the damage done to his vehicle, the time he has spent advocating for safer toilets, and the emotional distress he's endured from interacting with Red Rocks staff.

A spokesperson for Argus told Westword the events company has nobody on staff who would speak with media. Brian Kitts of Denver Arts & Venues, the city agency which operates the venue, also declined to comment on the flying johns, citing legal concerns.

Mowery held off until October to bring this matter to the attention of the press, hoping that the city would take action and the situation would be amicably resolved.

Now he's considering taking legal action, largely in the hopes of ensuring that Red Rocks staff is not abusive to concert-goers and to prevent a flying toilet from killing somebody.

"Why are we waiting until a tragic event to do something about this?" Mowery asks. "[The city is] going through a whole lot of effort to avoid doing the right thing."
KEEP WESTWORD FREE... Since we started Westword, it has been defined as the free, independent voice of Denver, and we'd like to keep it that way. With local media under siege, it's more important than ever for us to rally support behind funding our local journalism. You can help by participating in our "I Support" program, allowing us to keep offering readers access to our incisive coverage of local news, food and culture with no paywalls.
Make a one-time donation today for as little as $1.