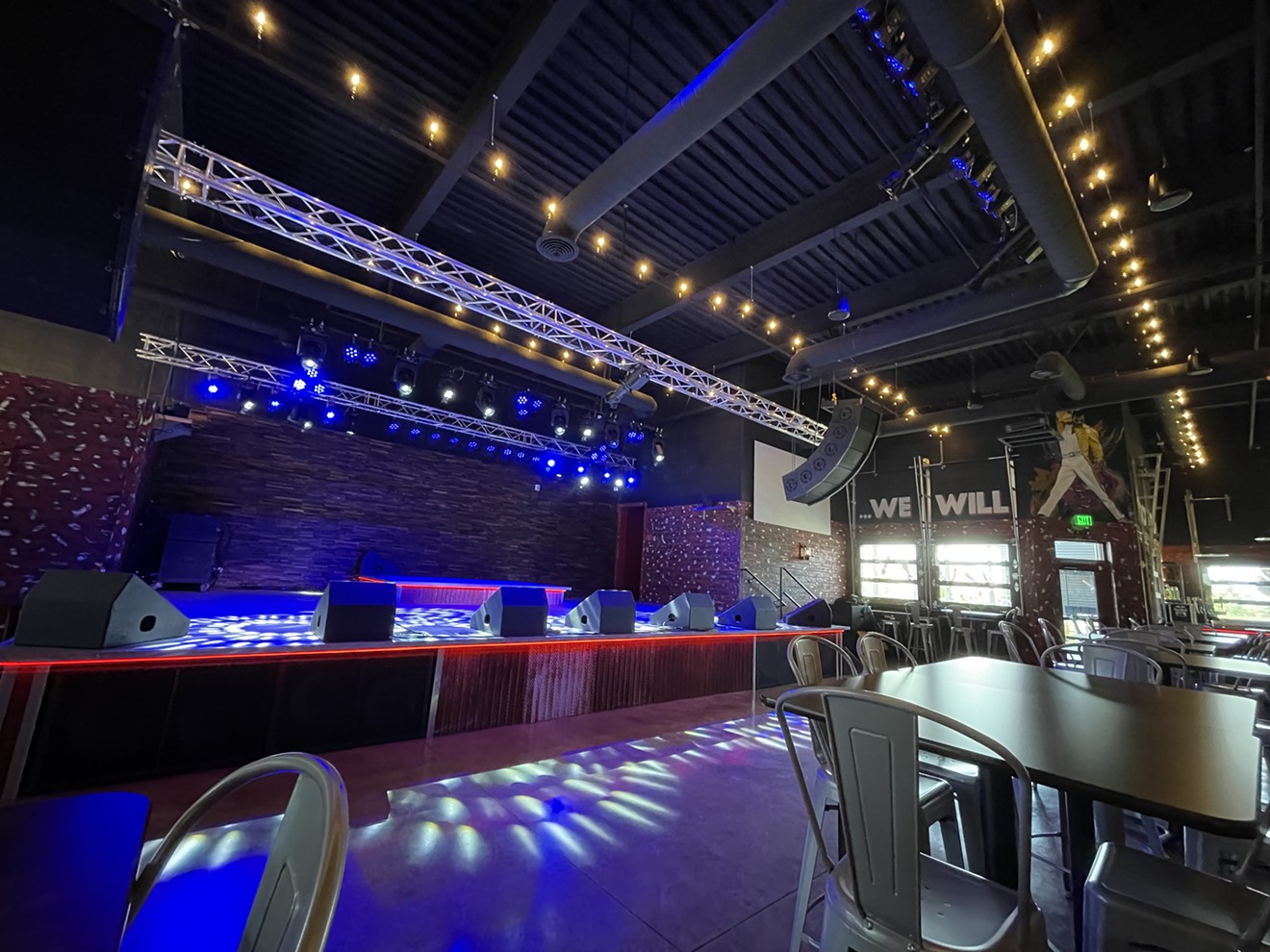 Wild Goose Saloon celebrates its grand opening on Friday, July 9, with Hazel Miller Jon Solomon
In 2019, Dale Trujillo opened Blu Note, a 200-capacity bar and grill in Parker that’s been bringing in local blues, jazz, country and rock acts. The spot was a "Parker bar," he says, and Trujillo wasn’t under the illusion that it was going to draw people from Denver, Littleton or Lakewood — unless there was a band someone wanted to see there.

But not long after opening Blu Note, Trujillo started thinking bigger. He noticed there wasn’t a music venue in Parker and the surrounding area big enough to host national acts. So he found a vacant lot, and last December construction started on the Wild Goose Saloon, which celebrates its grand opening on Friday, July 9, with local blues and R&B singer Hazel Miller.

Trujillo says the indoor venue has a 450-person capacity, while the outdoor patio, which has a smaller stage, can hold another 350 people. Parker and a five-mile radius from the venue will be its target base, but he doesn’t see this venue as just a “Parker bar.”

“I think we'll draw people from Denver. Just like Grizzly Rose draws people from Castle Rock and Colorado Springs and this area to it, I believe that we'll do the same,” Trujillo says. Inside the Wild Goose Saloon.
Jon Solomon
Trujillo recruited husband and wife Chris Dellinger and Lola Black, both from the hard rock band Lola Black, to be general manager and bar manager. The Wild Goose won’t stick to one genre and adds that the venue is booked through the end of year already.

“Obviously, being in Parker, we're going to do quite a bit of country, because country's huge here,” Dellinger says.

In the coming months, there are tribute acts slated to play, as well as national bands like Marcy Playground, Adema and Bad Wolves singer Tommy Vext.

“We're going to be all over the map, so it's going to be awesome,” Dellinger says. “We want to have a place where everybody feels welcome and everybody's comfortable and not just pigeonhole ourselves into one type of thing. So, we got something for everybody over here.”

Trujillo says the Wild Goose is different than anything else in Parker, and even Denver, adding that he didn’t know of a venue like his that has been built from the ground up, as far as could tell, in the past ten or fifteen years. There's plenty of space to enjoy barbecue at the Wild Goose Saloon.
Jon Solomon
The Wild Goose’s indoor stage is on par with a club like the Gothic Theatre, says Dellinger. The venue sports high-end sound and lighting systems.

“You’d have to go the Gothic or the Ogden to get the type of sound system and light show that you'll get here,” he explains. “Dale really didn't spare any expense on production. It’s really unique for a venue this size, because you're not used to having your head blown off with a laser light show, which is unreal for a smaller club.”

While most weeks will include four nights of live music at the Wild Goose, Wednesdays are dedicated to a country-western ladies' night with Cowboy Karaoke. In the future, there will be line dancing, and the spot plans to install a mechanical bull as well.

In addition to the Wild Goose’s two stages, two bars and patio, there’s a thirty-foot smoker in the back of the venue, and the club's menu is centered around smoked meats, including barbecue ribs, smoked turkey, pulled pork sandwiches and more.

Wild Goose Saloon is at 11160 Pikes Peak Drive in Parker. Follow the new venue on Facebook.
KEEP WESTWORD FREE... Since we started Westword, it has been defined as the free, independent voice of Denver, and we'd like to keep it that way. With local media under siege, it's more important than ever for us to rally support behind funding our local journalism. You can help by participating in our "I Support" program, allowing us to keep offering readers access to our incisive coverage of local news, food and culture with no paywalls.
Make a one-time donation today for as little as $1.