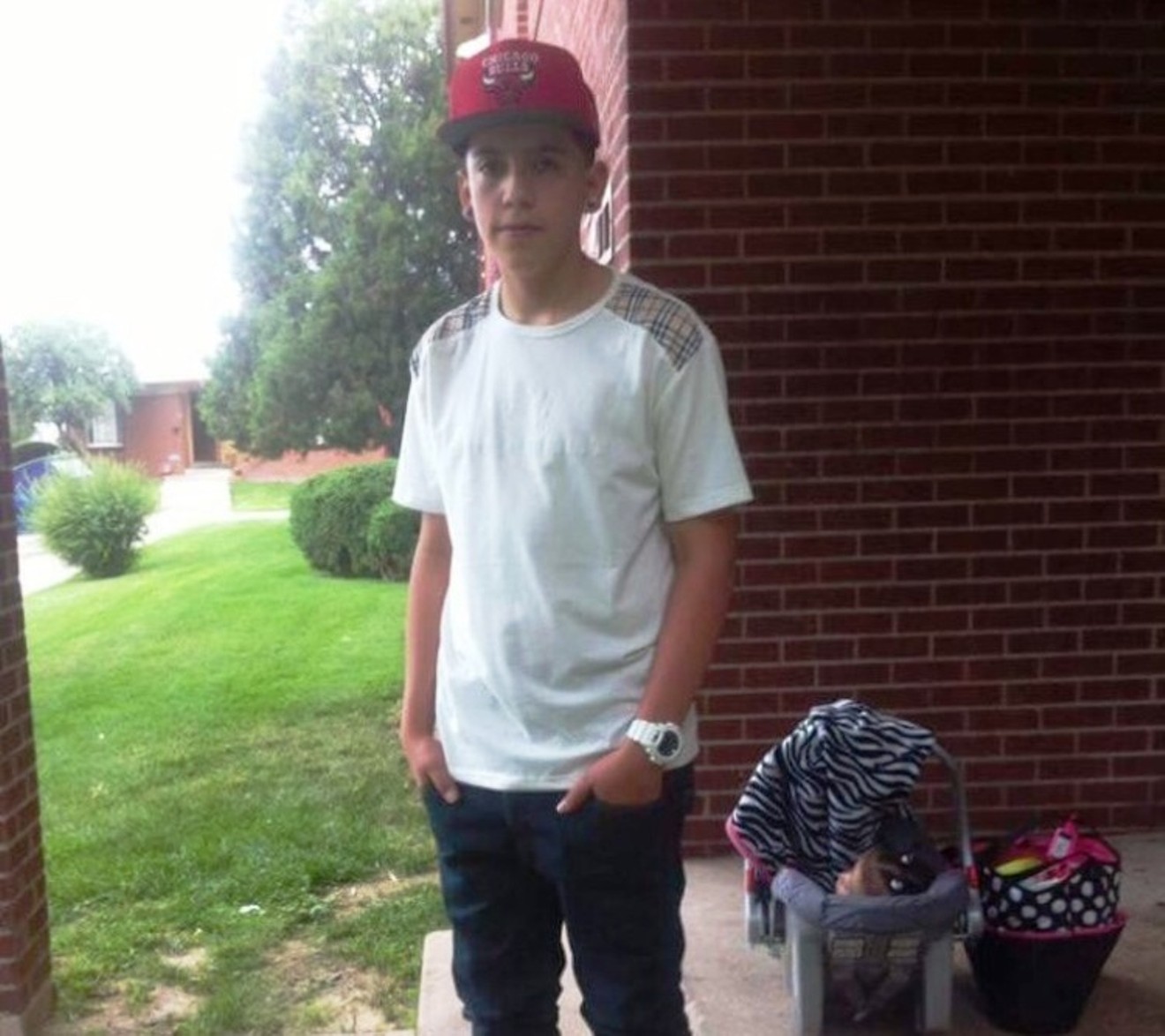 Alfredo Chavez loved baseball and was planning to become a barber — but fell in with what his sister calls "the wrong people." Courtesy of Priscilla Hernandez
The two shootings happened a few weeks and a few miles apart from each other. In both cases, juveniles crept into back yards in residential neighborhoods in the dead of night, hoping to boost marijuana plants being grown outside. The owners of the weed responded with gunfire. Somebody died.

But the outcome of the cases in Colorado's justice system couldn't be more different. Denver prosecutors decided that the state's Make My Day Law, which allows anyone to use deadly force in his or her home when faced with an uninvited intruder and a reasonable belief that said intruder "is committing or intends to commit a crime," didn't apply to the actions of Keith Hammock; Hammock, who was growing marijuana in his yard in the Whittier neighborhood, fired on would-be pot thieves with a .22-caliber rifle from a second-story window as they were fleeing the property. The shots killed one fifteen-year-old boy and left a fourteen-year-old critically injured. Convicted of second-degree murder, last month Hammock was sentenced to eighty years in prison for the shooting.

By contrast, all charges were dropped in the death of seventeen-year-old Alfredo Chavez, who was shot outside a grow house in Adams County on September 1, 2016. Seventeenth Judicial District Attorney Dave Young says he's satisfied that the actions of the shooter in that incident, Levi Sisneros, are justifiable under Make My Day as well as the state's self-defense statute.

"Each case is unique," Young says. "These are difficult decisions to make for a prosecutor. I've had cases where I knew people were waiting behind closed doors for someone to come through that door so they could shoot them. Under Make My Day, that's allowable."

But members of Chavez's family are far from satisfied with either the official investigation of the shooting or Young's decision. They point out that there's no evidence the youth ever entered Sisneros's house, and that he was shot in the back while he was evidently in flight. "He was in the wrong place at the wrong time with the wrong people," says Alysia Chavez, Alfredo's twenty-year-old sister. "He should have gone to jail, but he shouldn't have to pay for this by dying."

Alfredo's mother, Priscilla Hernandez, describes her son as "very helpful around the house, very respectful — not your average teenage boy. I never had any issues with him with drugs or anything like that." Chavez loved playing baseball and football and was making plans to enroll in the barbering program at Emily Griffith Technical College. He had no juvenile record, but in the summer of 2016, he began to hang around with boys who did have troubled histories and were looking for ways to make quick cash.

On the night of the shooting, he told his mother's boyfriend, Vincent Pacheco, that he was going to see a girl. Two other teens picked him up in a Tahoe around midnight. The Tahoe was stolen and had already been involved in a hit-and-run accident that night.

One of Chavez's companions apparently knew about Sisneros's grow operation, which included numerous plants in his basement as well as the back yard, and had helped himself to some of the plants before. This time around, the trio removed some of the plants in back and put them in the Tahoe, then returned for more — and encountered Sisneros. 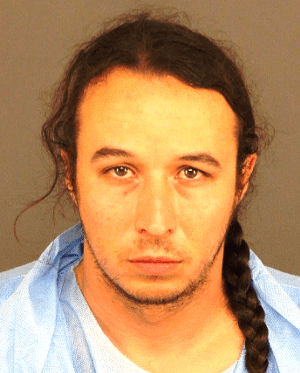 Levi Sisneros was arrested hours after the shooting, but all charges were dropped after authorities decided he'd fired in self-defense.
Adams County Sheriff's Office
Sisneros told police investigators that a roommate alerted him around two o'clock in the morning that somebody was in his back yard. Wearing only boxer shorts and carrying a 9mm Glock, he went into the yard and saw someone emerge from the garage and head for a gate in the perimeter fence. He ran after the figure, spotted three or four silhouettes on the far side of the garage and yelled, "I've got a gun, stop, put your hands up!" (One of Chavez's companions told police that he "heard an unknown voice scream out something to the effect of 'Hey motherfuckers!'"— followed immediately by a gunshot.)

Something was thrown in his direction, Sisneros said. "Levi stated he was in fear of his life so he leaned back and fired one round from his Glock 19," the officer wrote in his report. "He did not know if he actually shot anyone because he did not see any blood and the people were still running away."

Sisneros described the discharge of his firearm as a "warning shot." He didn't want to fire up in the air because the bullet would eventually come down and might hurt someone, he said, and he didn't want to fire into the ground out of concern about richochets. His single shot struck Chavez, roughly twenty feet away, in the back. It traveled through his left lung and exited through his rib cage.

The intruders fled. Sisneros observed one of them — Chavez — heading toward the Tahoe, which was parked on West 76th Avenue. Sisneros got dressed, came back out to the Tahoe, observed his pot plants in the back, and slashed two tires. Then he rode around the area on his motorcycle, looking for the perps.

Sisneros gave conflicting statements to the police about what he did with his gun (which was found in a backpack in a shed in his back yard) and why he didn't call police after the shooting (he said he asked his roommate to do so, but no call was made). Chavez's companions didn't call police right away, either. They called Pacheco, asking for a ride, and only gradually told him about the heist and the shooting; Pacheco sent one of them into a gas station to call 911. Chavez's body was found the next morning in a yard two blocks from Sisneros's house; he had left a blood trail at the Tahoe, where he apparently waited in vain for his friends to return, then moved on until he succumbed to the chest wound.

Pacheco says Sisneros's actions after the shooting don't sound like those of someone in fear for his life. "What kind of imminent threat can you be when you're shot in the back?" he asks. "They were trying to get the hell away, and he took it upon himself to pursue this kid, up to the point of going up to the car and slashing the tires."

Sisneros couldn't be reached for comment. In his police interviews, he said he felt "violated" and "raped" when he discovered someone had been in his garage. But records indicate that there's no access to the house from the garage; the door opens to the back yard. "I don't think the Make My Day Law applied at all," says Thomas Manzanares, Hernandez's father. "My grandson was in his back yard, not in his house."

District Attorney Young concedes that the circumstances of the Chavez shooting present some "gray areas." At the same time, he adds, the investigation corroborated key aspects of Sisneros's story, including where he was standing when the fatal shot was fired. If he was abruptly confronted with three or four trespassers and something was thrown in his direction, self-defense can't be ruled out, he says.

"The difficult part for the family to understand and appreciate is that not only do we have to prove it's a homicide, but we have to disprove self-defense," he explains. "It wasn't only Make My Day; this was a self-defense issue. It would be difficult to prove that he intended to kill anybody. If we didn't have self-defense, if all we had was Make My Day to make a decision, it might have gone a different way."

Young met with members of Chavez's family months ago to explain his decision and commiserate with them. The conversation was recorded. "I'm not happy with this decision," he told them. "I wish I could file murder charges on the guy, because I think he took advantage of a law that's not intended for this purpose.... I feel sick about it...[but] I can't file a case that I know I can't prove."

Hernandez and Manzanares say they're frustrated that Sisneros didn't end up charged with something, even if it was for failing to summon police or for growing marijuana outside in his yard — something that's not permitted under current regulations. They are exploring a possible civil suit and worry that too many growers are careless about their stock, enticing juveniles who see something that can be converted to cash and good times.

Young agrees that grow operations in residential areas can be a problem. He hopes new legislation that reduces the per-household limit for homegrown medical marijuana from 99 plants to a range of 12 to 24 plants will help. "I've had many discussions, and I know other DAs have as well, with municipalities in our county on how you regulate this stuff," he says. "That's something that homeowner associations can put into the covenants: no marijuana grows. It can also be in the zoning ordinances. But it's difficult to prosecute someone criminally when we have a constitutional amendment that says you can grow this stuff."

Hernandez says she hopes to launch an online campaign to raise money for a headstone for her son. "He wasn't a bad kid at all," she says.