American Indian Academy of Denver Fighting for Its Future 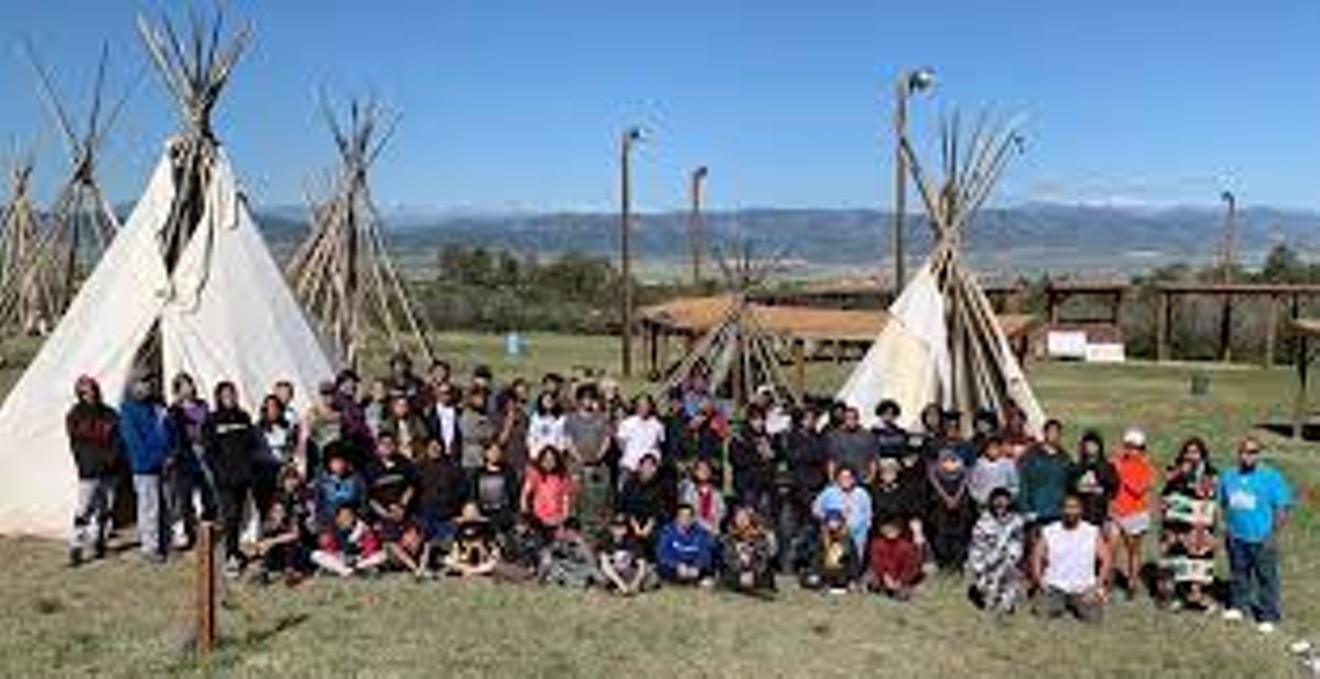 The AIAD was designed to provide an education alternative for Indigenous students. American Indian Academy Facebook
On November 29, the 158th anniversary of the Sand Creek Massacre, staff, students and supporters of the American Indian Academy of Denver plan to rally outside of the school at 1865 West Mississippi Avenue, to show their support of the charter school, which they worry could be targeted for closure by Denver Public Schools.

Robin Flood and her daughter, a tenth-grader, will be among the speakers, a lineup that also includes elected tribal officials from five tribes whose ancestral homelands are now the Front Range of Colorado.

At AIAD, Flood's daughter has experienced learning and connection unlike that at any other school she's attended, according to her mother. If AIAD doesn't stay open, Flood will be homeschooling her daughter. "I’m not going to put her in another public school where she’s going to feel uncomfortable," she says.

Flood is Sicangu Lakota from the Rosebud reservation in South Dakota. She has lived in Thornton since she was a child, and when she was in middle school, a Native Hawaiian teacher pushed to allow the handful of Native students there to have time to learn and engage in their culture every week. But that attention was the exception, she recalls; when she attended Horizon High School in Thornton, it was often difficult to be a Native student.

Flood's daughter attended a few different middle schools where she was bullied and felt disconnected from her peers and teachers, her mother says; her grades were poor and she was struggling mentally and emotionally. Flood wanted her to go to a school where she could be immersed in her own culture. And when AIAD opened at 1865 West Mississippi Avenue in 2020, founder Terri Bissonette invited her to enroll.

According to the Colorado Department of Education, the graduation rate for American Indian students in Colorado is 64.5 percent. AIAD was designed to provide an educational alternative that targets the needs of these students and helps them thrive. At the school, students take Lakota, Navajo and Spanish language classes; they go through cultural immersion programs where they learn about their own histories. It's the only indigenized STEAM school in Colorado, and the staff consists primarily of people of color.

"We have students who have historically not been exposed to their own cultures and their languages, and what they’re finding at AIAD is that true passion, that sort of cultural identity that allows them to be proud of who they are and allows them to understand themselves in a larger context in the value of their own family," says Nicholas Martinez, board co-chair of AIAD.

But the school isn't doing so well in the eyes of Denver Public Schools, which sent a notice of concern to AIAD in October. "District leadership has engaged in several conversations with the AIAD board and discussed a range of options for the school, which may include closure if the school is unable to maintain financial solvency," says Scott Pribble, DPS director of external communications.

Although AIAD's contract doesn't expire until the 2023-2024 school year, Pribble says that DPS could accelerate the process and discuss whether the school can make "significant improvements in educational programming and school culture" in order to justify renewing the charter.

The school opened remotely in the fall of 2020 during the pandemic, but it was still a successful year, according to Bissonette. In 2021 it switched to a hybrid model, but 55 percent of students were still fully remote. Those in sixth and ninth grade, transition years, have had a particularly tough time, and Bissonette says the school experienced many behavioral issues.

"We were dealing with a very high level of mental health issues, whether it was kids internalizing the trauma or whether they were acting out because of the trauma," Bissonette says.

She says that many of the issues, including low enrollment, are a result of the pandemic and not being able to build a solid school culture. The school has 134 students and 21 staff members.

AIAD's enrollment struggles aren't unique. Between 2019 and 2021, DPS lost about 3,600 students. "It was the same thing that every other school in this district experienced," Bissonette says. "We feel like they are acting like what we experienced was unique.

"All I’ve asked DPS is to please just give me a semi-normal year and please at least give us until the first round of school choice, February 2023, and let’s see what happens," she adds.

But over the past six weeks, AIAD leaders have worried that the school won't get that chance.

AIAD isn't one of the ten DPS schools that superintendent Alex Marrero had originally recommended be closed and consolidated with other nearby schools. At its November 17 meeting, the board voted against closing any schools, but the district must still figure out how to balance the budget, and AIAD worries it could be on the next hit list.

Denver Public Schools had originally scheduled a special meeting with public comment on AIAD for today, November 29, Bissonette says, but administrators moved the comment session to November 28, citing the Sand Creek Massacre anniversary. According to Bissonette, AIAD supporters didn't learn the date had been changed until they looked at the sign-up sheet on November 22.

During her time at the mike, Bissonnette said that DPS leadership had come to the school unannounced and discussed AIAD closing; the district has essentially told the school that if it does not surrender its charter at the end of the school year, it will be recommended for closure in December.

At the meeting, Superintendent Alex Marrero said that DPS has “zero intentions for this school to disappear," adding that as superintendent, it was "news to me.”

And AIAD hopes that Marrero holds to that, and that the school is allowed to continue.

Flood has another daughter, who's just three. She wants to send her to AIAD one day, and her tenth-grader supports that, Flood says: "My daughter told me she’s gonna do everything she needs to to make sure her three-year-old sister goes to that school."

The American Indian Academy of Denver rally runs from 6 to 9 p.m. on Tuesday, November 29 at 1265 West Mississippi Avenue. Find out more here.

Update: This story has been updated to include a new location for the rally and information about the November 28 DPS board meeting.
KEEP WESTWORD FREE... Since we started Westword, it has been defined as the free, independent voice of Denver, and we'd like to keep it that way. With local media under siege, it's more important than ever for us to rally support behind funding our local journalism. You can help by participating in our "I Support" program, allowing us to keep offering readers access to our incisive coverage of local news, food and culture with no paywalls.
Make a one-time donation today for as little as $1.
Katrina Leibee, a recent graduate of Colorado State University, is an editorial fellow at Westword, covering politics, business and culture.
Contact: Katrina Leibee
Follow:
Twitter: @katrinaleibee