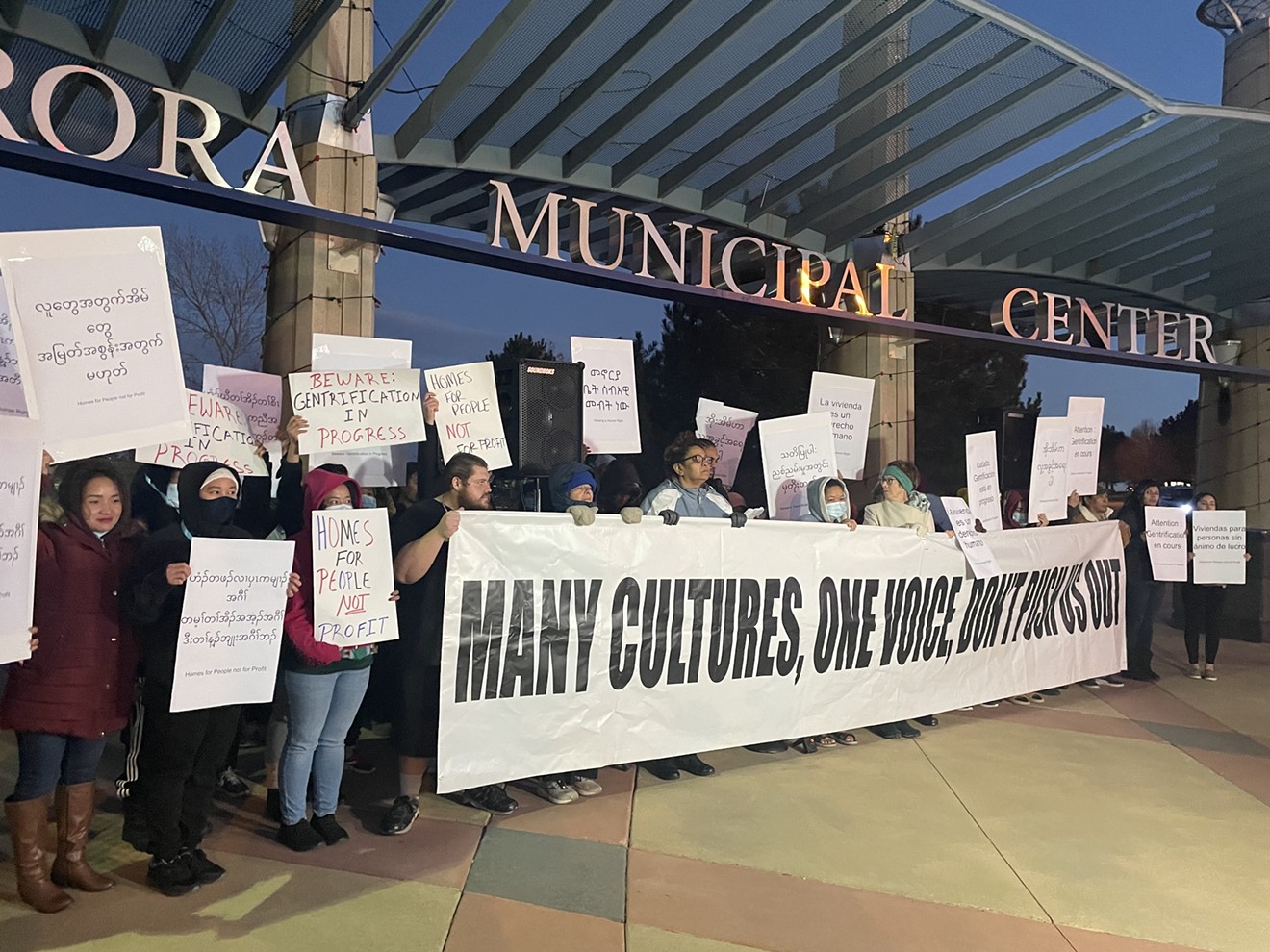 Residents of northwest Aurora and East Colfax protest outside the Aurora Municipal Center. Katrina Leibee
Residents of northwest Aurora as well as Denver's East Colfax neighborhood headed out into the cold on November 14 to demonstrate against the site plan for another housing development proposed for their area. The proposal for Grand Avenue calls for building 53 townhomes on the edge of Aurora that will sell for between $500,000 and $600,000; after the Aurora Planning and Zoning Commission approved the development on October 12, some residents had filed an appeal that was slated to be discussed by Aurora City Council that night.

The developer, redT Homes, wants to build ten multiple-unit townhomes on a mostly vacant lot along Akron and Alton streets between 13th and 14th avenues. Residents say they're worried that the development will change the character of their neighborhood, encouraging gentrification and breaking up their diverse community.

The people who live in Aurora speak around 160 languages, and businesses highlight the different cultures. "This city has become a destination for food: You can have Ethiopian food and Mexican food; you see the world here," says Nebiyu Asfaw, a resident of the area for the past thirty years. "That's what makes it so beautiful, and we don't want to lose that; that's a culture and heritage worth preserving."

As developments come in, the residents worry that their rents will go up as well, to a level they can't match. According to the Aurora Housing Strategy, 56 percent of renters in Aurora can't afford to purchase a home over $200,000.

On October 18, residents had protested another development, the Ambience, which will go up at the southeast corner of Yosemite Street and East 14th, with prices starting at $600,000.

Asfaw says he was lucky to buy a house when prices were lower many years ago, but over the years the neighborhood has become unaffordable for most. "A working-class person making minimum wage? Forget about it. Renting a two-bedroom apartment is out of the price range of the majority of the people," he notes.

"This high-end development is a prime example of housing built not for our community who lives here now, but for the future owners from outside of the neighborhood and outside of the city, who threaten to gentrify our communities," said Nate Kassa, an Aurora resident and immigrant to the United States, at the November 14 protest.

At that protest, residents proposed a "people's housing plan," calling on the city to activate land in northwest Aurora for more affordable housing, and suggesting that it create a first right of refusal for residents and organizations in the area so that they can purchase apartment buildings before they are bought by developers. They also want Aurora to invest in community ownership to prevent further displacement.

In their arguments, the residents cite many statistics from the Aurora Housing Strategy, pointing out that while they seem to be on the same page as the city, Aurora's approval of developments doesn't reflect that.

While some residents complain that these two developments are "luxury housing," the Denver Metro  Association of Realtors actually labels "luxury" anything priced at $1,000,000 or above.

According to redT Homes owner Nathan Adams, residents are sharing misinformation about what developments like this will do to the neighborhood. "I could not be more disappointed at the information they've spread," Adams says. "There will be people within the neighborhood that will have a new housing option. We're creating diversity of housing options, we're not displacing anyone. As for gentrification, that is usually used to imply that there is a change of the makeup of the ethnicity of the neighborhood. We do not discriminate with who we sell to."

Although many residents in the area are renters, there are also plenty of people who want to buy starter homes, he adds. "We build for sale attainably priced housing; it's not for everyone, and it's nonsense to think that it should be for everyone."

When Grand Avenue units are built, Adams says, redT is willing to pre-sell to people in the zip code and the adjacent zip code before selling to others, making sure that the units go to people who live in the neighborhood first.

At the November 14 demonstration, though, Brendan Greene, executive director of the East Colfax Community Collective, shared this quote from the the Aurora Housing Strategy: "As of 2017, Aurora had approximately 7,500 too few rental units for renters earning less than $25,000/year."

"Prices continue to rise, and the planning commission continues to approve high-end projects that are out of the reach of our community members," Greene said.

But Adams thinks that the East Colfax Community Collective should focus more on policy changes rather than targeting individual housing developments. For example, Aurora does not have a regulation like Denver's that requires that 8 to 10 percent of the units in a residential development of ten or more units be affordable.

After all the public comment, both positive and negative, Aurora City Council decided that the project can go forward.
KEEP WESTWORD FREE... Since we started Westword, it has been defined as the free, independent voice of Denver, and we'd like to keep it that way. With local media under siege, it's more important than ever for us to rally support behind funding our local journalism. You can help by participating in our "I Support" program, allowing us to keep offering readers access to our incisive coverage of local news, food and culture with no paywalls.
Make a one-time donation today for as little as $1.
Katrina Leibee, a recent graduate of Colorado State University, is an editorial fellow at Westword, covering politics, business and culture.
Contact: Katrina Leibee
Follow:
Twitter: @katrinaleibee