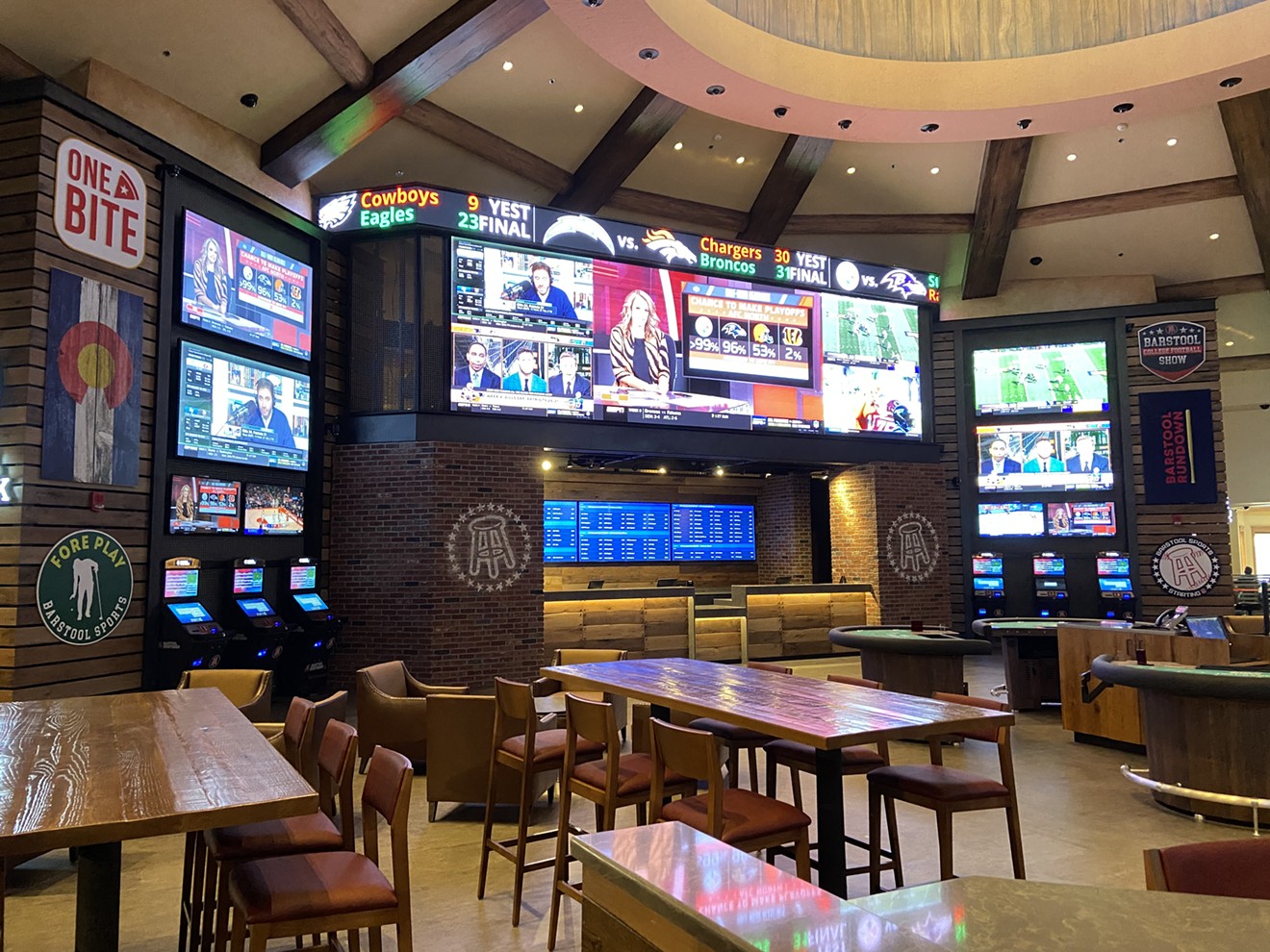 The Barstool Sportsbook is opening at the Ameristar on November 5. Courtesy of Jenny Kramer
Ameristar, a massive hotel and casino in Black Hawk, is about to make a big splash in the Colorado sports-betting pool: On November 5, the casino, which is operated by Penn National Gaming, will open the country's first retail sportsbook with the Barstool brand name.

"We know that sports betting is a younger demographic than our casino demographic. This really gives us an opportunity to introduce ourselves to new guests, new players," says Sean Demeule, Ameristar general manager.

Penn owns 36 percent of Barstool Sports, an online sports and pop-culture company that has tens of millions of loyal followers — many of them young and male.

Ameristar's Barstool Sportsbook will be something of a sports bettor's paradise. Next to where fans can place bets in person, there will be seating for 196 people (75 or so in the COVID era), in front of a 24-foot digital screen and 800-inch TVs. Guests will also have access to a bar, three blackjack tables and a roulette table, all in the same space.

"You can play blackjack and watch some sports. It'll be a cool place to be. The vibe of it will be laid-back and fun," says Kevin Dawn, Ameristar's sportsbook manager. "Our retail space will really set aside what we’re doing."

It will also build anticipation for the Barstool Sportsbook app that will drop in Colorado sometime in 2021. The app first went live in Pennsylvania in September; Penn is now focusing on getting it ready for Michigan, whose sports-betting market will go live soon.

Right now, FanDuel and DraftKings are the two biggest mobile sports-betting apps in the United States. "Our CEO has said our goal is to be top three in every state that we’re in," explains Demeule.

"I definitely think that this is going to be one of the more highly anticipated launches that Colorado has," says Ian St. Clair, lead writer at PlayColorado.com, who has covered the Broncos since 2004. "It’s the brand."

Founded by Massachusetts native Dave Portnoy in 2003, Barstool Sports tapped into a market of sports fans who were eager to consume sports journalism content that sounded like a conversation they might have in a bar with another fan. In the years since, the company has exploded in size, developing massive social media followings and some of the best podcast series in the sports world, and attracting investors. Penn bought its stake in Barstool Sports earlier this year.

Among Barstool's strengths are the hilarious, opinionated and at times controversial personalities producing content. 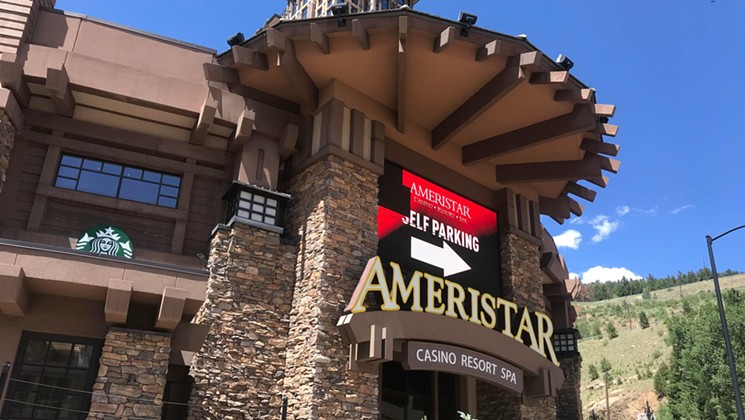 The Ameristar is a massive casino and resort that's risen high above all other buildings in Black Hawk.
Photo by Michael Roberts
"Barstool is very interesting, because they were more like a media conglomerate than anything, and now they’re becoming a sportsbook. It’s a unique situation that we haven’t really seen before," says Ben Cary, a local handicapper who runs CapWize, a sports-betting advice website

Just as Barstool has fans, though, it has plenty of haters. Critics accuse it of misogyny and casual racism.

Denver resident and sports-betting fanatic Ryan Hess says he won't be using the Barstool Sportsbook app when it drops  "In a nutshell, the founder of Barstool is a giant prick, and I feel like the company capitalizes on toxic masculinity," he explains.

"There are people who support it and will defend it, and then there are the people who are a little more put off by Barstool," notes St. Clair. "I think that’s why there’s so much anticipation."

Because Barstool "already has brand awareness," Cary suggests that marketing and customer-acquisition costs in Colorado will be significantly lower than those of other companies. "They’re not really doing anything that aggressive, because I don’t think they really need to at this point," he says.

Barstool personalities have already generated plenty of hype, which will bring a new market to Ameristar. "Especially with Colorado, you’re trying to find people who may have not done it before," says St. Clair.

When the NFL season kicked off in September, the amount of money bet on sports in Colorado jumped from $128.6 million in August to $207.6 million the next month. That figure barely topped Indiana's total take for September, and was only behind the totals of New Jersey, Nevada and Pennsylvania. Eighteen states, as well as Washington, D.C., now allow some form of legal sports betting.

"When you look at the numbers, you can see what the market is capable of," says St. Clair.

At the same time, the state generated just under $70,000 in tax revenue in September, which was much lower than the almost $190,000 collected in August. The reduction was attributed to the wave of free and low-risk promotional bets offered by apps to gain new users as football started up; going forward, tax revenues, which come directly from casino winnings, should rise.

Colorado's sports-betting market opened in May, after the state's voters approved Proposition DD in November 2019. Under the stipulations of Prop DD, a majority of the state tax revenue generated from sports betting goes to fund the Colorado Water Plan.

And now another big company is ready to take the plunge into the market.
KEEP WESTWORD FREE... Since we started Westword, it has been defined as the free, independent voice of Denver, and we'd like to keep it that way. With local media under siege, it's more important than ever for us to rally support behind funding our local journalism. You can help by participating in our "I Support" program, allowing us to keep offering readers access to our incisive coverage of local news, food and culture with no paywalls.
Make a one-time donation today for as little as $1.