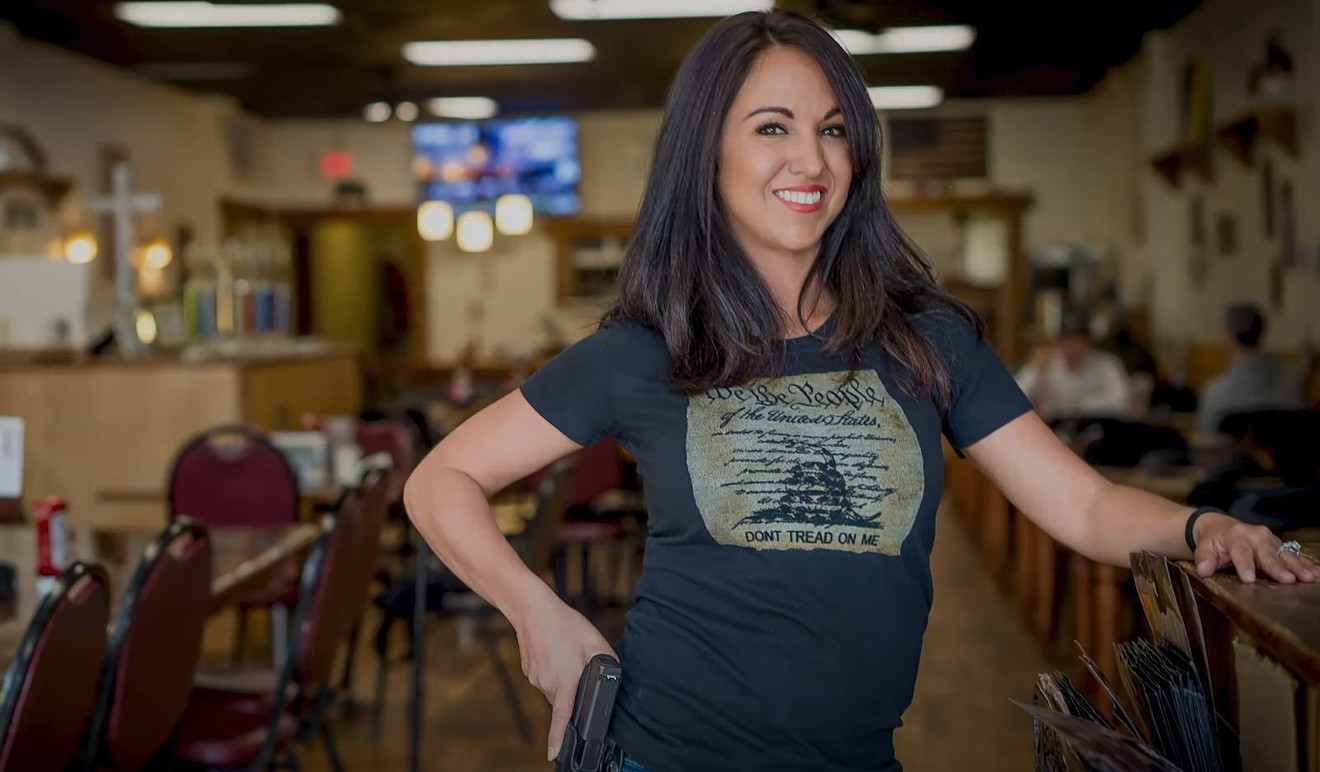 Can a winning smile, a cocked hip and an equally cocked gun win a U.S. Congressional seat? YouTube
Lauren Boebert is the current heartthrob of the conservative set, with her gun-totin’, loose-tongued, screw-you demeanor and her love for all things Trump. She upset incumbent U.S. Representative Scott Tipton in the 2020 Republican primary in Colorado’s 3rd Congressional District, and is currently in a statistical dead heat with Democrat Diane Mitsch Bush for the seat.

Boebert rose to political notoriety — mainly in the state, but also occasionally on Fox News — despite having a curious set of qualifications, most of which come back to her willingness to say whatever she thinks in the moment. She has no formal education beyond a GED certificate and some current college business classes. She’s never run for or served in public office before. She’s promised to join the Freedom Caucus if she wins, a far-right wing of the GOP led by wrestling coach and tiny-wants-to-fight-guy-at-the-bar Jim Jordan (Republican from Ohio) at exactly a time when that wing of the party, Trump lovers all, is facing a loss in both political power and voter support.

In case Boebert follows in that path and loses, she apparently has a backup plan: modeling. But if by some chance Coloradans wind up sending her to D.C., here are just some of the things they'll be apologizing for over the next two years.

Extremism…You Want Fries With That?
Boebert’s only real claim to leadership is related to her owning and operating Shooters Grill in Rifle, notable primarily for refusing to abide by state regulations for COVID safety and being shut down by the authorities in response. Because that’s what you want in a dining establishment — putting the health and safety of its finances above the health and safety of its patrons. But that wasn’t the first time Shooters Grill had gotten attention: Yeah, this is the place that’s obsessed with guns in a not-at-all-over-compensatory way, to the point that patrons and servers alike are packing heat. (Sadly, viruses are bulletproof.) To be fair, if you judge the restaurant by its website, it’s become more about political statement and related apparel sales than actual food. And don’t miss the Shooters Grill “Our Story” page, which proudly states “What We Make” is “Lorem ipsum dolor sit amet, consectetur adipisicing elit, sed do eiusmod tempor incididunt ut labore et dolore magna aliqua.” That’s Boebert for you: unafraid of placeholder text, or leaving websites unfinished. Showing exactly the kind of eye for detail that Coloradans want representing them in Washington.

She Was Using Those Alternative Facts
According to Rural Colorado United, some of the details from Boebert’s rise to fame have been creatively altered to make for a better story. Fine for a raconteur, perhaps, but not something we need more of in American politics. The most telling of these is Boebert’s own telling of her rebirth as a right-winger, in which her mother was a Democrat living off welfare and teaching Boebert to do the same. It was only when Boebert got her first paycheck from McDonald's that she realized she never needed to rely on the government at all. Here’s the trouble: Boebert’s mother wasn’t a Democrat when Boebert claims to have been living in poverty in Montbello; on the contrary, she registered Republican in 2001, switched to unaffiliated in 2013, and returned to Republicanism in 2020 just in time for her daughter’s campaign. So at best, Boebert’s mother was a Republican living on welfare, which doesn’t make for a great campaign ad.

You Gotta Fight for Your Right for Underage Drinkers to Party
Aside from having Shooters Grill closed down for non-compliance, Boebert has made several other less-than-inspirational decisions when it comes to abiding by “law and order” — something she and Trump both love very much, as long as it’s in their own best interests. There’s a lot of small-time stuff on Boebert’s record (reckless driving, several tax liens, failure to appear, health citations at various venues), but the most serious example of poor decision-making might be when she was cuffed and detained while interfering with the arrest of underage drinkers at a concert venue in 2015. Boebert threatened the police after several warnings, saying that she had “friends at Fox News.” Lauren, if there’s one thing the history of Fox News has taught us, it’s that no one has friends there, except maybe those of the fair-weather sort.

There’s a Difference Between Being Anti-Vaxx and Just Not Caring If Vaccines Work
In a radio interview on KVOR’s Jeff Crank Show, Boebert said on the record that she’s not opposed to vaccines, per se, just their practical use. Vaccines “are a personal choice,” she said, adding that Governor Jared Polis wanted to “mandate vaccines and hold our children’s education hostage.” Nonetheless, she’s also gone on record stating that she and her husband are both vaccinated, and so are their children, which is the specific hair Boebert wants to split on the subject. Of course, the vaunted “herd mentality” — what scientists and the people who listen to them refer to correctly as “herd immunity” — so embraced by her hero Donald Trump actually requires 90 to 95 percent of a population to get a vaccine in order to prevent disease within that population. Which therefore requires mandates by a government in order to protect the people it serves, much like military registration and driver's licenses and car insurance. Ah, misunderstanding how something works but pretending you know what you’re talking about: It’s like the last four years all over again.

Stand Back and Stand By, QAnon
As Westword reported earlier this month, Boebert and former campaign manager Sherronna Bishop have lauded both the neo-fascist Proud Boys and supported the viral conspiracy-theory purveyors of QAnon. At the time of Bishop’s Facebook posting, Boebert said, “Everything that I've heard of Q, I hope that this is real. Because it only means that America is getting stronger and better, and people are returning to conservative values." How patently false and destructive rumor-mongering means that America is getting “stronger and better” is unclear, but the support for it is crystal. Should Boebert, for whom Bishop is no longer campaign manager, be held responsible for the latter’s views (her own comments aside)? Of course she should. Like Trump, Boebert already seems to be surrounding herself with “the best people.” Stephen Miller, expect a phone call.

What All Congressional Representatives Should Say When they Look in the Mirror Each Morning
If the U.S. House of Representatives thing doesn’t work out for Boebert and the pandemic proves to be too much for her restaurant and its M16 Breakfast Burrito, she has a longstanding Plan B: modeling. Since 2011, again according to reports from Rural Colorado United, Boebert has actively maintained an account with the website exploretalent.com, where she participated in a 2011 modeling contest that advertised itself this way: “Do you look in the mirror each morning and say ‘Whew! I am HOT!’” Clearly, Boebert’s answer to this was a resounding yes — or, more in keeping with the understated nature of the exploretalent.com website, probably YES! But this was 2011, right? We all have a past, right? The difference is that in Boebert’s case, she’s spent about $500 a year on maintaining that page, perhaps in the hopes that someone will notice her and offer her some sort of media contract. It's entirely possible for the otherwise-unqualified Lauren Boebert...we hear she has friends at Fox.
KEEP WESTWORD FREE... Since we started Westword, it has been defined as the free, independent voice of Denver, and we'd like to keep it that way. With local media under siege, it's more important than ever for us to rally support behind funding our local journalism. You can help by participating in our "I Support" program, allowing us to keep offering readers access to our incisive coverage of local news, food and culture with no paywalls.
Make a one-time donation today for as little as $1.