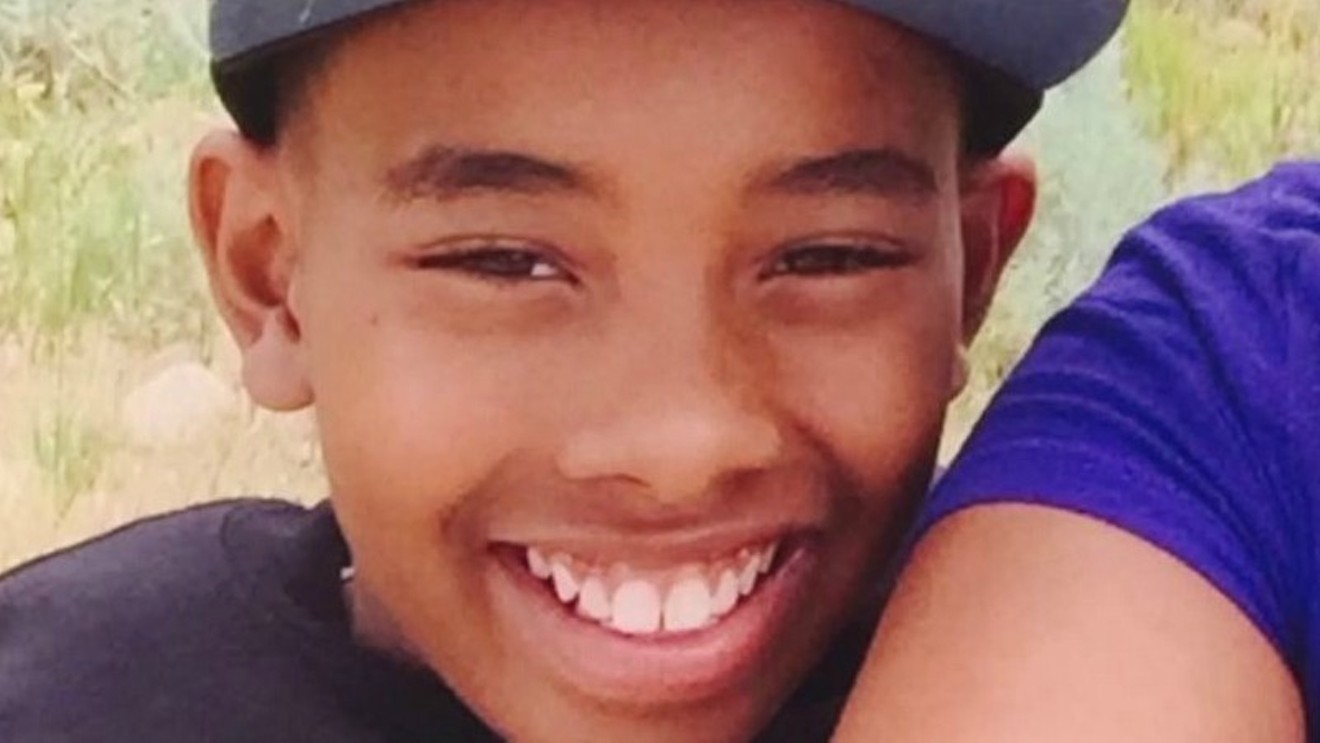 Aiden Lawrence, fourteen, was shot and killed in the Stapleton neighborhood's Prairie Meadows Park on August 9. Family photo via Fox31
Colorado Governor Jared Polis stirred controversy in August when he called for an independent investigation into the death of nineteen-year-old De'Von Bailey, who was shot in the back while running away from police in Colorado Springs. But there are plenty of other local examples of fatal gun violence involving young African-Americans, including the killing of fourteen-year-old Aiden Lawrence, who was slain in the Stapleton neighborhood's Prairie Meadows Park that same month. No one has been charged in Lawrence's death.

Expect Polis to hear about stories like these during his appearance at the Gaining Ground in the Black Community Summit, a four-day event hosted by the Colorado Black Round Table that gets under way this afternoon; the full schedule is below. The annual gathering may not get an enormous amount of attention in the mainstream media, but its power is exemplified by its guest list — not just Polis, whose appearance on Friday, October 18, is scheduled immediately after a discussion of youth and gun violence in the metro area, but also former member of Congress Betsy Markey, ex-Denver City Council member Albus Brooks, and candidates for the U.S. Senate, who will take part in a forum on education and economic opportunity.

According to political consultant and CBRT program director John Bailey (no relation to De'Von Bailey), the summit "is about celebrating and empowering African-American citizens. But we'll also be focusing on what we call the dash between the dates 1619 and 2019" — a reference to a New York Times project marking 400 years since the arrival in the Virginia colony of the first slave ship.

"There's also the reparations debate going on in Congress and a number of issues that are reasserting themselves, reimposing themselves in our land of insensitivity at the current moment," Bailey continues. "So we decided to also deal with hot topics relative to the report we did a few years ago" — "Gaining Ground in Colorado's African American Communities," published in 2013. "We're going to be looking at housing, education and other areas of disparity. And with the recent rash of shootings, we wanted to bring together folks from the Department of Public Safety, the police, the Denver DA's office and other folks who've been active in the community to talk about the issue relative to the impact on the community and families and young people. We want to look at services, programs and resources that might be able to address some of this stuff."

He traces much of the tension to the man in the Oval Office. "In the age of Trump, we're questioning each other based on race, based on historical path, based on how much wealth you have. We're going backwards, and he's allowed hidden forms of racism to rear their head and come out into the open. America has become a land of fear rather than a land of opportunity, and in a land of fear, folks get guns, and they use them. That's why we need to bring everyone to the table — not just to look at young people and guns, but also to look at gun violence in the society."

He emphasizes that the conversation with Polis will cover a wide variety of subjects important to the black community — "but public safety is an issue, and at some point, it'll be on the agenda." One of the event's themes, he believes, is that "we're in a time period where all of us have to stay woke. We have to do better, we have to stop pointing fingers, we have to stop trying to figure out who we can blame. And in this case, the African-American community is stepping up and holding ourselves accountable." Sunday, October 20th
GOTV (Get Out the Vote) SUNDAY

• Importance of Voting Discussions in Black Churches Throughout The State)
• Return Your Ballot Immediately
KEEP WESTWORD FREE... Since we started Westword, it has been defined as the free, independent voice of Denver, and we'd like to keep it that way. With local media under siege, it's more important than ever for us to rally support behind funding our local journalism. You can help by participating in our "I Support" program, allowing us to keep offering readers access to our incisive coverage of local news, food and culture with no paywalls.
Make a one-time donation today for as little as $1.