Boebert Watch: Seven Reasons Not to Vote for the CD3 Incumbent...Just Since June 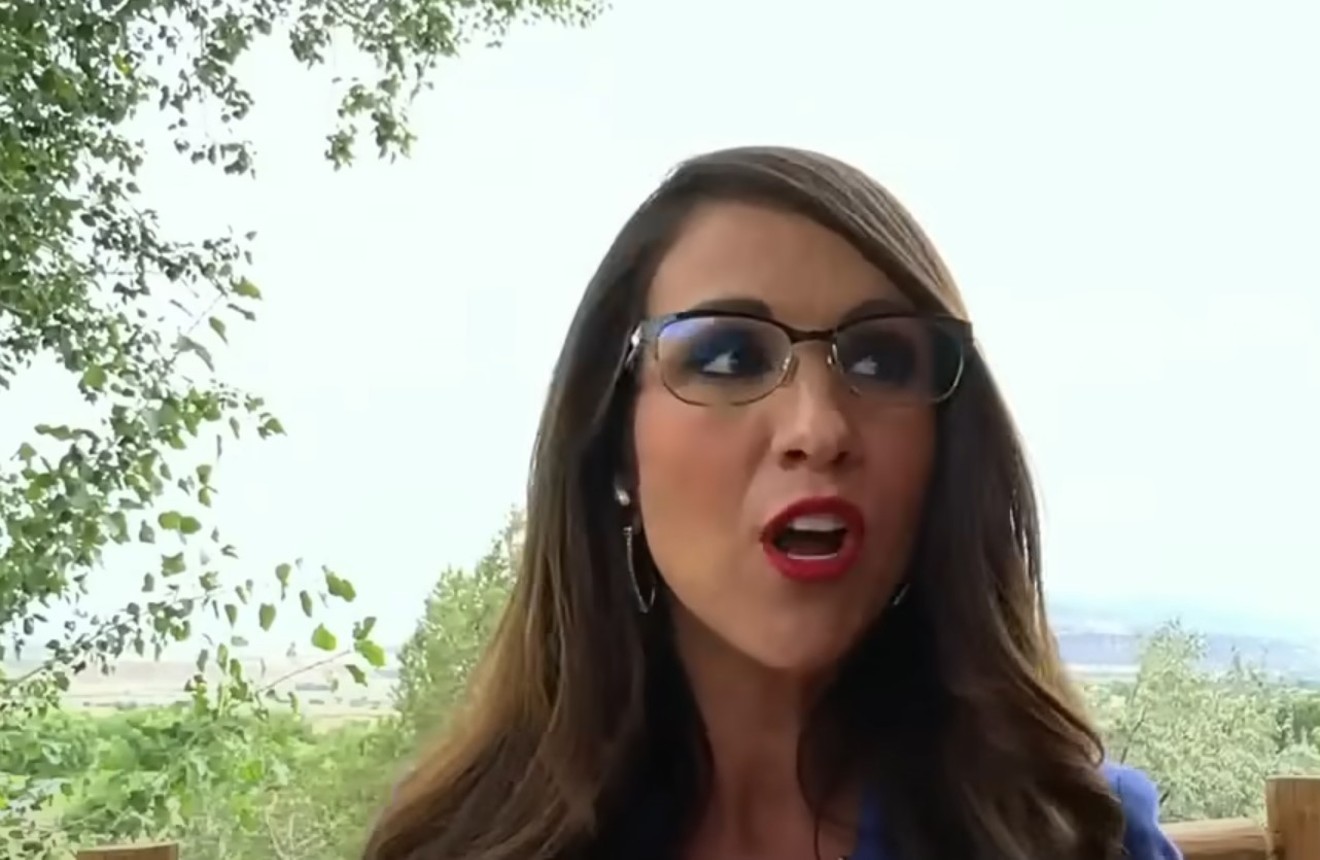 Lauren Bobert...watching her back. YouTube
Is Lauren Boebert vulnerable in the upcoming elections? Probably not, despite a recent poll by Keating Research suggesting that her Democratic opponent, Adam Frisch, is running in a statistical dead heat with the gun-worshipping congresswoman from Rifle. After all, the polling came from the Frisch campaign and still showed Boebert leading Frisch by two percentage points. That's within the margin of error, though: Can Colorado dare to hope that even the deep-red population of CD3 might get tired of Boebert and her political slapstick?

Because Lauren Boebert should be vulnerable in any district that demands integrity, or even competency. She’s truly the Trumpiest of Trump politicians: ignorant and proud of it, defiant in the face of decorum, a politician more interested in grift than governance.

In case the small number of undecided CD3 voters are paying attention — approximately 7 percent, according to that same poll — here are seven of the head-smackingly stupid Boebert moments just since June!

October 12: "The Thomson [sic] Divide mineral withdrawal is the latest in a string of Biden administration attacks on American energy and mineral development."
Lauren Boebert lives by the political rule that if you can't co-opt a political act, condemn it. She takes the second route in an October 12 release speaking out against President Joe Biden's creation of the Camp Hale/Continental Divide National Monument. The move throws into stark relief just how far the modern GOP has fallen from its roots: After all, it was Republican President Theodore Roosevelt who pushed the National Park System and named Devils Tower as America's first national monument over a century ago, for reasons that Boebert and her unthinking ilk are dismissing as meaningless today. Boebert's specific criticisms are equally disturbing: "Why did you claim you are taking today’s action in part to benefit the tribes, when the nearest tribal reservation is 4 ½ hours away?," she asks Biden, ignoring the fact that, you know, tribes weren't always on reservations. (At least she didn't make this statement on Indigenous Peoples Day.) She also ignores the fact that the new monument is a tribute to American veterans and their legacy — and, of course, conservation, which is easily ignored by "Drill Baby Drill" Boebert, who relies on oil and gas money funneled through her husband Jayson's "consulting firm." But perhaps most of all, Representative Boebert...if you're going to throw a fit about a place in Colorado like the Thompson Divide? At least know how to spell it.

Twitter
October 8: “Two Words: Let’s Go Brandon!”
This tweet from October 8 is Boebert in a nutshell: dumb, wrong and unashamed, and that's not even considering the disrespect inherent in the already played-out “Let’s Go Brandon” comment against a sitting president. The fact that she mistook three words for two isn’t even all that notable — just another gaffe in a long string of them from Boebert, whose office clearly needs an editor. What’s remarkable is that the error has been spun to be a trolling effort, as though Boebert meant to make the mistake so that gullible libs would take the bait. But here’s the thing: It doesn’t matter which version is true. Both paint Boebert as someone who shouldn’t be in elected office, especially at the national level. On the one hand, she’s shit-posting and unable to perform kindergarten-level addition. On the other, she’s shit-posting and using her time and position in office not to better the lives of her constituents and the American public, but to purposefully antagonize a significant section of her voters. Which of these do Coloradans want in a national representative? Please, let the answer be neither.

October 3: “They are putting litter boxes in schools for people who identify as cats.”
No, they’re not. But Boebert made the “furries in schools” claim nonetheless at a Mesa County Republican Women's luncheon in early October, following the kitty litter claim with “Durango is doing this. This is how extreme it is.” This is how wrong she was: There are no furries in Colorado schools, much less Durango's schools, and if there is kitty litter tucked away in some classes, it was put there in case of shelter-in-place orders during school-shooting episodes. As Karla Sluis from the Durango School District put it to the Colorado Times Recorder: “It’s important that real facts are shared.” Which sort of sums up America’s lesson over the last six years, for those paying attention. 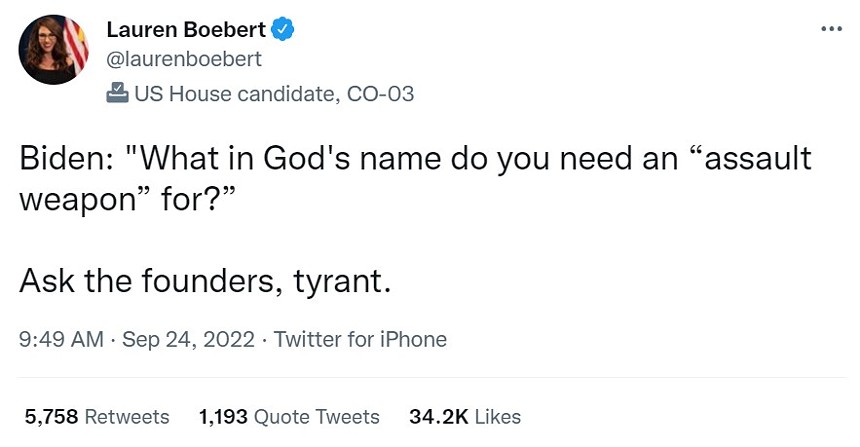 Twitter
September 24: “Ask the founders, tyrant.”
President Biden — whom Boebert calls a “tyrant,” among many other names that make little sense and that she couldn’t defend if her own Zoom backdrop were aimed at her — must have thought this was a sweet little “gotcha” tweet in response to his question: "What in God’s name do you need an assault weapon for?” But suffice it to say that the Founders had no idea that assault weapons would ever exist, or that guns would one day be capable of firing hundreds of rounds per minute. More important: Isn’t everyone tired of people who venerate a specific proper name but insist on misusing it? Ronald Reagan was no saint, but he would have despised today's GOP, who still call out his name during very boring sex. Jesus hasn’t come back because frankly, he’s just bummed by how things have gone. And the Founders would just ask Boebert to please finish making them a sandwich and perhaps read a damn book.

August 25: “'I loved paying back my student loans so much that I want to do it for other people,’ said by no one ever.”
Actually, a lot of people have said this, and things much like it, thank goodness. There was a time in this country when people aspired to work in their social groups — families, churches, businesses, towns and cities and counties — in order to make life a little easier for those who came later. So the next generation wouldn’t have to suffer like their forbears did. The MAGA position has become the complete opposite of that, as Boebert demonstrates here: Suffer because I did; your pain makes me feel better about my own state of being. It's a corrosive philosophy...but it does explain Boebert and her supporters' apparent constant state of righteous anger toward the world.

August 15: "Guess that means I have to tweet about these sick, demented groomers even more."
While its bar on what constitutes hate speech might already be ground-level, this post from Boebert was too low even for Twitter. What Boebert is doing here isn't speaking out against child abuse — she's joining with a chorus of other far-right provocateurs claiming that any support for teaching about LGBTQ+ issues in schools amounts to sexual pedophiliac grooming. Specifically, Boebert is advertising that she was #3 on the list of opportunistic and malignant purveyors of hate speech in an August 2022 report from the Center for Countering Digital Hate and the Human Rights Fund — and saying that she'd have to pick up her game to rise higher on the list. Of those responsible for spreading hate speech. Seriously. How sick does someone need to be in order to be among those Boebert is so desperately trying to impress? Twitter
June 26: “The Church is supposed to direct the government. The government is not supposed to direct the church.”
Granted, Boebert was addressing an evangelical congregation this past summer, so you could chalk this comment up to simple pandering…that is, if Boebert had the political savvy to even attempt to contextualize it. She doesn't. Instead, she’s become such an evangelical extremist that this clip was featured on the October 9 episode of 60 Minutes, and Bart Barber, the president of the Southern Baptist Convention, responded that Boebert’s position “stands in contrast to 400 years of Baptist history, and everything I believe in about religious liberty. I’m opposed to the idea of Christian dominion, churchly dominion over the operations of government.” And Barber isn’t a liberal: This is someone who voted for Trump in 2020 (though he also says that the election was in no way stolen), and says that he’d vote for Mike Pence in a primary for 2024. It’s a good sign that Boebert may be losing the thinking population of even religious conservatism— both for the long-term viability of church as an institution, and for America writ large.

When someone says “I’m tired of this separation of church and state stuff,” as Boebert did that same day, it’s time for America to be tired of Boebert once and for all.
KEEP WESTWORD FREE... Since we started Westword, it has been defined as the free, independent voice of Denver, and we'd like to keep it that way. With local media under siege, it's more important than ever for us to rally support behind funding our local journalism. You can help by participating in our "I Support" program, allowing us to keep offering readers access to our incisive coverage of local news, food and culture with no paywalls.
Make a one-time donation today for as little as $1.