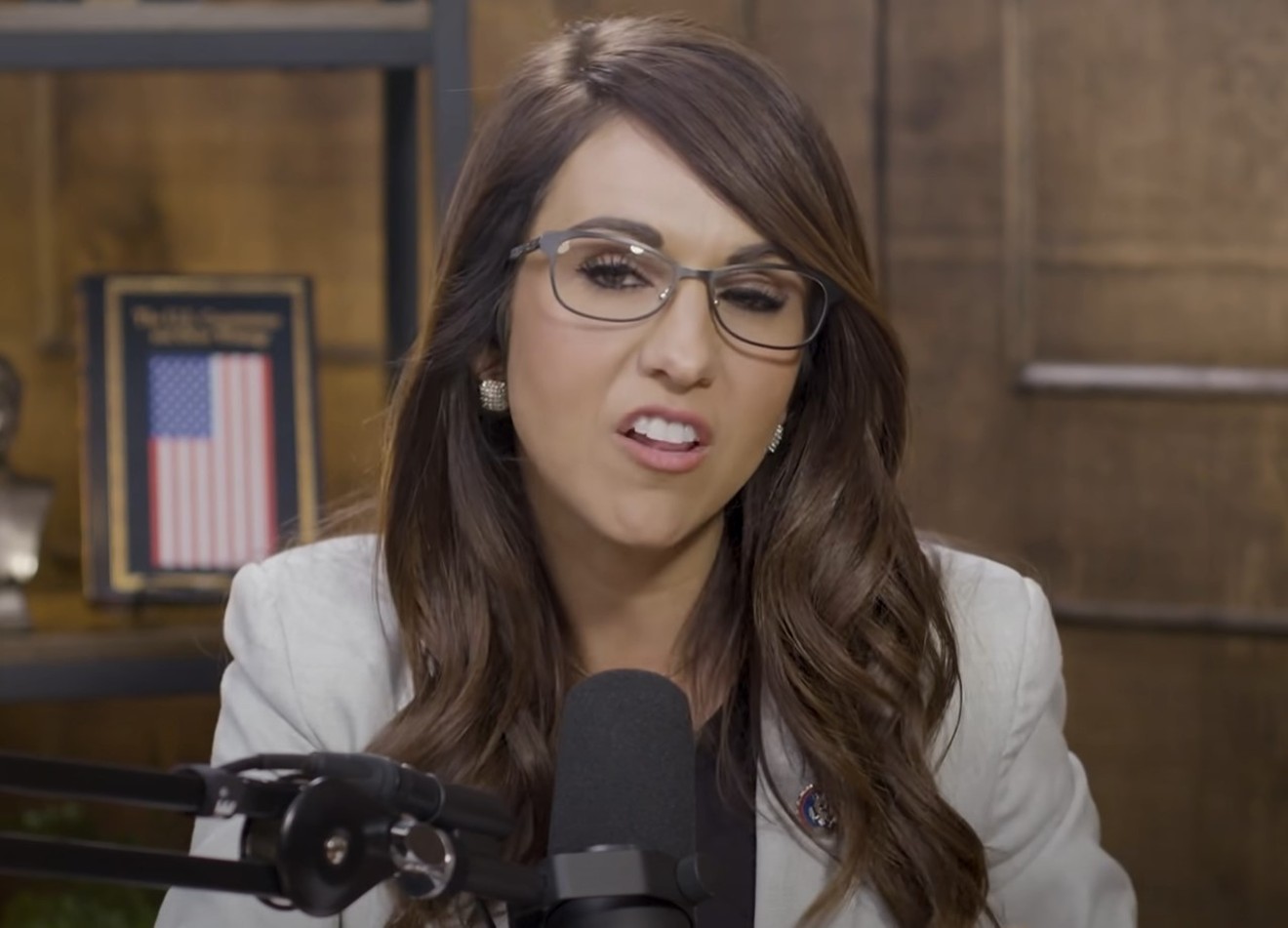 Sneering is Lauren Boebert's primary form of communication. YouTube
The 2022 elections are only ten months away, which means that Lauren Boebert, like all U.S. representatives, started focusing on re-election approximately fourteen months ago. The case can be made that Boebert’s election was something of an anomaly — a dark horse running in a deep-red district at a time when an undercurrent of Trumpism was still holding sway with much of the GOP base — and Colorado is holding its collective breath as it waits to see if CD3 comes to its senses this time around.

Boebert is not the kind of elected official who tends to stick around. She’s the flash-in-the-pan sort: someone who comes in, makes a big splash with a lot of noise, then moves into punditry or lobbying or maybe just selling pancakes and novelty T-shirts of questionable logic and taste. Boebert knows this — and certainly some of her campaign people do, including her former communications director, who resigned in protest after only two weeks on the job and after Boebert tipped her seditionist hand the day of the January 6 insurrection.

What’s decidedly not Boebert’s brand is actual governance. She has no interest in productivity, save for the production of outrage. So it makes some sense that she’d feel a little threatened by Colorado politicians who have a track record of real public service, especially those who also have no interest in stirring the shit just to see the shit swirl. A Colorado person through and through — especially one with some real and established conservative bona fides — could be a serious threat, especially in her remaining-red district. Someone like Don Coram.

Twitter
The well-known and well-liked Coram, a state legislator, just announced that he's challenging Boebert in the primary. But he's far from her first declared opponent.

Some, like Democrat Sol Sandoval, are attractive candidates, with a lot of liberal hopes pinned to their political ascension. But those candidates are frankly more electable in other parts of the state; any hopeful whose political stripe isn't some shade of red has a long climb ahead of them if they want to claim the GOP stronghold — made even stronger in recent gerrymandering — that is District 3.

There’s an Independent candidate, Kristin Skowronski, whose online presence so far appears limited to a LinkedIn profile and a Twitter account. Her platform can be summed up by her top pinned Tweet: “A war is being waged between puritanical conservaturds and law-loving democraps. The prize? Your liberties! I vow to secure the rights you have, and the ones you've been denied!” The serious abuse of exclamation points in that quote might be enough to eliminate her already, and Boebert already has the demagoguery angle played.

Since August, Boebert's main primary opponent has been Marina Zimmerman. The Zimmerman campaign hasn’t really caught on yet, but it’s early in the race. Zimmerman has positioned herself as the rational alternative to Boebert, stating that her goal is to “bring solid, ethical representation back to District 3.” As a conservative, she eschews many of Boebert’s positions — she’s pro-vaccine, and not only believes that the 2020 election was fair and accurate, but she voted for Biden and claims to never have been a supporter of Donald Trump. Zimmerman is pro-gun, against abortion rights, and walks a middle ground on climate change; she also has little governmental service on her record, though she did intern with former CD3 Representative John Salazar at one point.
Zimmerman may have caught Boebert’s attention, but based on the lack of a Twitter response, perhaps not as much as Zimmerman’s campaign had hoped. But Boebert certainly took notice of Coram's intentions.

"Anyone who has looked at Don Coram's voting record knows he is a self-serving, super-woke social liberal who would have a far better chance of winning the Democrat nomination," says a release from Boebert dated January 7 — the morning of the day that Coram said he’d officially announce his candidacy. Boebert and her people see Coram as a threat for good reason: Despite the empty attack by Boebert, Coram is considered by his constituency to be a staunch Republican, if a moderate one. He’s worked for the people of Colorado for over a decade, first as a state representative for District 58, and most recently as a state senator for District 6. He was born and raised in Montrose, has worked in both ranching and mining, and currently operates a hemp farm. Sort of tough to get more Colorado than that.

LaurenforColorado.com
Coram’s moderate reputation comes from some of his policy work — he’s long been a supporter of LGBTQ rights and marijuana legalization; more recently, he co-sponsored a bipartisan bill in the 2021 session to modify civics education to ensure the inclusion of the contributions of ethnic, racial and religious minority groups. It’s this last bit that might gall Boebert the most; it makes her favorite joke about Representative Ilhan Omar look as small and awful as it really is.

But more troublesome for the Boebert re-election campaign just might be Coram’s willingness to cooperate. That's not the brand of the current GOP, but it’s always been true for Coram, and true for the people he represents here in Colorado. “If you’re not willing to reach out and talk to someone that has a different political persuasion than you do and just pound your fist and say ‘This is how it is,’ it’s not going to work,” Coram said at an event in Montrose this week. “I’ve been criticized because I have too many Democrat friends.”

Oh, the horror. A spirit of statesmanship? An openness to respectful debate? An aversion to name-calling and antagonism and you-lose-so-I-win politics? That’s so not today’s GOP.

But it should be. It has to be, if our democracy is going to survive.

And so the 2022 election begins in earnest. The journey to unseat Lauren Boebert will undoubtedly be a rough ride: Boebert reportedly ended 2021 with a $2 million war chest, only some of which will go to hyper-inflated mileage reimbursement and settling outstanding debt for her failing restaurant. But as of now, Coram and the voters of CD3 have the opportunity to take the wheel.
KEEP WESTWORD FREE... Since we started Westword, it has been defined as the free, independent voice of Denver, and we'd like to keep it that way. With local media under siege, it's more important than ever for us to rally support behind funding our local journalism. You can help by participating in our "I Support" program, allowing us to keep offering readers access to our incisive coverage of local news, food and culture with no paywalls.
Make a one-time donation today for as little as $1.