"F*cking Up Our Top 10 Draft Pick:" Broncos Fans on Twitter Pissed at Win 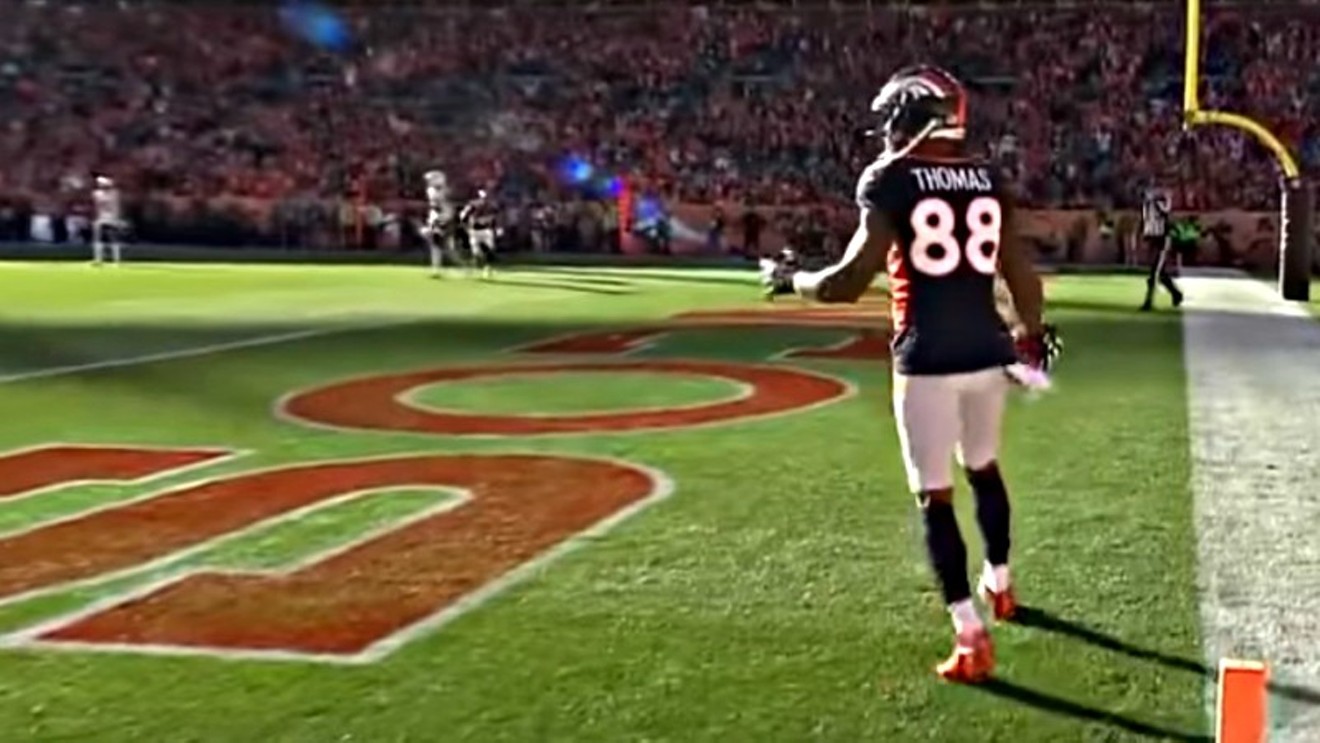 A rare sight in recent weeks: Broncos receiver Demaryius Thomas in the end zone after catching a touchdown pass. NFL via YouTube
After your Denver Broncos defeated the New York Jets 23-0 yesterday, December 10, messages from Twitter-using fans relieved that the team had finally broken its eight-game losing skid were countered by tweets ripping the squad for winning a meaningless contest and hurting the prospects for the best-possible draft picks next year.

The point made by the latter group: In an embarrassing disaster of a season, the Broncos managed to make things worse by notching a victory long after doing so no longer matters.

During the contest, the Broncos displayed the skill set that optimistic loyalists had been hoping to see since day one: a stifling defense and an offense (led once again by future journeyman quarterback Trevor Siemian) that was unspectacular but efficient enough to get the job done. And the New Yorkers certainly helped out. While the Jets-Jets-Jets were actually in the playoff hunt, at least tangentially, coming into yesterday's face-off, they looked completely disinterested — whereas the Broncos seemed energized to discover that they didn't suck as hard as recent efforts suggested.

Problem is, the Broncos have no reasonable shot at the post-season, and every W makes much-needed 2018 draft picks that much worse. For that reason, plenty of Broncos lovers would prefer the outfit to tank, as seen in the tweets below, putting them in conflict with those who believe winning is its own reward.

Broncos winning gives them the 6th pick on the draft after being in line for the 4th pic.twitter.com/eJpVsDmpIF

Never been more disappointed in a Broncos win - we need the draft picks, come on!

Elway to VJ: "You can see right here in this addendum to your contract that you agreed to lose all remaining game so we could fire you without regret and draft Josh Rosen." #Broncos #NFL #Elway #BroncosCountry #YouHadOneJob pic.twitter.com/jvp2MnI5m3

Literally no positives in winning, just lose out and get the highest Draft pick possible

Nope, we just need to lose the rest and get good draft picks, fire the offense, the coach, Elway and start fresh.

Keep the momentum going to drop a few draft spots.

Finally, Trevor just chucking the ball up. What he should have done Day 1. Now that we need to lose out for draft picks. @broncos

FUCKING UP OUR TOP 10 DRAFT PICK