Ten Things You Should Know About Visionary Architect Charles Deaton 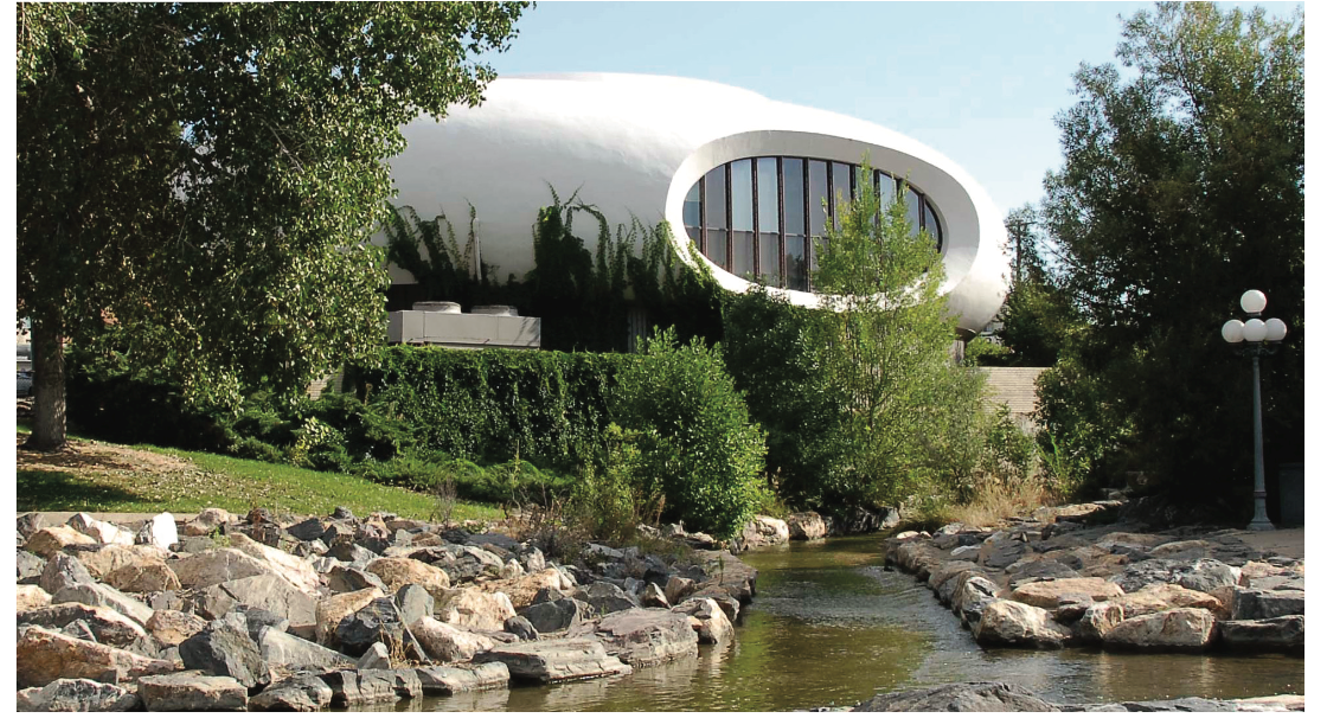 Designed by architect Charles Deaton, the Community Banks of Colorado building on South Broadway celebrates its fiftieth anniversary this year. moaonline.org
Englewood is throwing a big party for architect Charles Deaton, with an exhibit focused on his "sculptured buildings" at the Museum of Outdoor Arts and a September 7 open house at the Community Banks of Colorado building at 3501 South Broadway, a graceful and unexpected Deaton signature work that's been turning heads on the busy street for half a century.

Deaton is best known in Denver for his Sculptured House — aka the "Flying Saucer House" and the Sleeper house because of its appearance in a Woody Allen sci-fi comedy — located on a mesa in the foothills. But there's much more to Deaton's vision and work than those cutesy labels imply, as Westword  explored in a 1991 profile of the architect a few years before his death. That article predates our online archive, but here are some observations and Deaton's own remarks from the interview that help shed light on what the current celebration is all about.

1. It's not about spaceships.

"No, I wasn't trying to be streamlined or futuristic," Deaton said, explaining the evolution of the Sculptured House in Genesee. "I was going to do a piece of sculpture for its own sake. It became long and low and flat because of the internal planning, and also to be part of the mesa. I like to think that it grew here, like a very friendly, cooperative mushroom."

2. But it is about natural forms.

Born in Clayton, New Mexico, the son of an oil geologist, Deaton grew up in Depression-era Oklahoma and Illinois. His formal schooling ended with high school, but he had a strong sense of form, influenced by geology trips with his father. He was fascinated with roundness: the curved spaces of the caverns at Carlsbad, the water-smoothed boulders in the Kiamichi Mountains, the circularity of certain plant forms. "Anything curvilinear spooks a lot of architects," he noted. "They're just fine as long as they're on the T-square, triangle and compass. But they go to freehand, and then they think they're into free-form, and that's death. That's like trying to design a wad of chewing gum."

During World War II, Deaton worked in aircraft engineering and design at a Lockheed defense plant in California, translating aerodynamic forms into sheet metal. "I was dealing in metal sculpture and didn't know it," he said. "I read everything I could, and I realized that, technically, you could accomplish almost any shape you could visualize — and this was before the computer era."

4. If you're going to follow your dreams, it helps to have other resources.

While still in his teens, Deaton created and marketed a drill-for-oil board game called Gusher, a distant cousin to Monopoly. After the war he moved into industrial design, securing dozens of lucrative patents on bank-vault doors, security systems, modular furniture and light-diffusion devices. Money from the patents allowed him to turn to architecture and eventually open his own firm. Only a handful of his pioneering designs ever made it past the proposal stage. The patents "gave the income I needed to say no," Deaton said. "I did fewer buildings after that, but the ones I did, I did the way I wanted to do them."

5. The Englewood bank has a big brother in Casper.

One of Deaton's first proposals to make it off the drawing board was the Wyoming National Bank in Casper, completed in 1963. Rejecting traditional bank design as reminiscent of mausoleums, he created a domed lobby supported by petal-shaped concrete ribs, a kind of well-lit lily pad in which the walls bend gently away from you. "I wanted people to be more important than the bank," he explained. Though the structure remains, the interior has undergone great alteration; another early project, the round Central Bank annex in downtown Denver, was demolished in 1990.