Editor's note: As of May 21, 2019, attorney Jeffrey Springer says the lawsuit filed by Cidney Fisk against the school district in Delta County has been "resolved," although he's precluded from disclosing any additional details. Continue for our previous coverage.

The folks at Delta County High School, on Colorado's Western Slope, are learning what can happen when you mess with Cidney Fisk. The teen is suing the public school and a slew of other related individuals and entities in United States District Court, alleging that her identity as an atheist and criticism of activities such as allowing a Christian group to hand out Bibles on one district campus resulted in a wide range of discriminatory acts, including the arbitrary lowering of her marks in a student government class.

"I've been doing this for a long time, so I'm not usually shocked," admits Jeffrey Springer, the Denver-based attorney who's representing Fisk in the case. "But I'll tell you, I was shocked to learn that in response to Cidney objecting to the religious indoctrination that was taking place at her school, her grades were changed."

The complaint is accessible below, and it summarizes Fisk's allegations like so: "After exercising her rights to speech and religious beliefs, school officials and teachers retaliated against Ms. Fisk including by reducing her grades, depriving her of earned honors, undermining her scholarship and university applications and creating an unwelcome and hostile environment."

The defendants have not commented on the lawsuit.

Cidney Fisk as seen in a 2016 Facebook photo.
Facebook
Fisk's accomplishments at Delta High were considerable. During her senior year, she earned a 4.1 grade-point average and scored an impressive 26 on her ACT. She also served as student body treasurer and captain of her high school's frequently honored speech and debate team; worked on the school magazine, the Delta Paw Print; and logged more than 400 hours of community service on behalf of organizations such as UNICEF and the Junior Kiwanis Key Club.

Additionally, Fisk participated in the school's "Christian Fellowship" club during her sophomore year "in an attempt to fit in," the suit maintains. But over time, she made her atheism known and began to criticize some of the overtly Christian proselytizing allowed by numerous Delta High staffers, not to mention members of the county school board, including Kathy Svenson, who was quoted at an October 2013 meeting as expressing her belief that "transgender students should be castrated."

Other examples: The district allowed Gideons International to pass out free Bibles to middle school students in 2015 and 2016, let instructor Dan Dunham hold extracurricular Bible study classes under the moniker "Donuts With Dunham," and extended a speaking invitation to Chad Williams, author of a book called SEAL of God.

After Fisk criticized these activities in an April 2016 article published in the Grand Junction Daily Sentinel, she received numerous death threats via message boards on Facebook from other students — but the lawsuit alleges that the school district "did nothing at all in response." On top of that, the suit states that her student government grade was lowered from a 98 to a 70, and her marks were changed to F's in other classes in which she'd previously racked up near-perfect scores.

A portrait of Cidney Fisk during her days at Delta County High School.
Facebook
In explaining the reason behind these changes, school personnel are quoted in the suit as citing Fisk's "questioning of authority" and telling her that she'd been highly disrespectful by saying how she felt about religious matters. They told her that when it came to her beliefs, she should "shut up" and "fake it until she makes it" rather than "stirring the pot."

Complaints from Fisk's parents eventually convinced staffers to readjust the failing or near-failing grades she'd been given after the article's publication, bringing her up to a B average. But the lawsuit argues that she wasn't allowed to speak at her graduation ceremony, even though student council officers traditionally did so; had her application to the National Honor Society denied after administration interference; saw her bids for Boettcher and Daniel scholarships sabotaged by officials; and received negative recommendations from counselors regarding applications to various schools, including the University of Denver, Chapman University, Baylor University, Simpson College, Lewis and Clark College, Grinnell College and Reed College.

The lack of endorsements didn't prevent Fisk from getting into DU, and attorney Springer says she's very happy at the school, which she currently attends, even though paying for tuition would have been a lot easier had she landed a Boettcher. Instead, she won a $4,325 scholarship from a group called Western Colorado Atheists and Freethinkers.

Still, Springer sees her complaint as having relevance beyond the specific facts of her case. "From my own, personal standpoint, I think it happens to be extremely important in today's world, where we have a president who'll talk about the Judeo-Christian community and needing to believe in the Lord and 'God bless this and that.' There just doesn't seem to be room for people who might have a different point of view. Religion is creeping into everything that goes on, including government-sponsored functions and government activities." 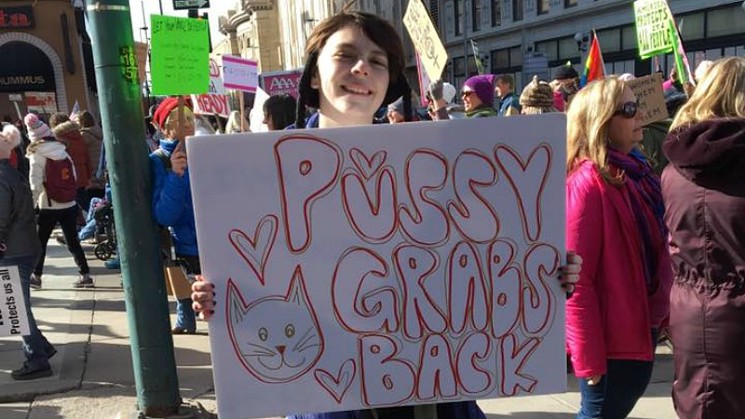 Cidney Fisk at a 2017 protest.
Facebook
"In Cidney's circumstance, she was a student at a public school, and she had the right to attend a public school and obtain a public-based, secular education," Springer continues. "She should have been free from attempts to indoctrinate her into any particular religion or force her to adopt any particular religious views. But the school was apparently highly invested in providing students with a religious-oriented experience socially and from an academic standpoint — and in my opinion, that's a flagrant violation of the Colorado and U.S. constitutions, which call for a separation of church and state and allow one to have free exercise of religion. And that also means the right not to have a religion."

Springer acknowledges that Fisk might not have won every scholarship for which she applied or gained entrance to each college on her wish list even if counselors had penned glowing tributes to her. "This is the real world, so you might get a counselor who loves sports and may not love you because you don't, for instance. But the one line we can draw that's pretty bright is that having a religious belief that isn't commensurate with what the school or the counselor or the administration might believe cannot be a basis for a negative recommendation. It cannot creep into any formulation of whether you ought to be receiving a good recommendation or a bad recommendation. That needs to be assiduously avoided, but unfortunately at Delta, I think something different occurred. And I'm afraid that religious-based litmus tests for employment or government positions or school advancement are becoming all the more common."

Cidney "is just a great young person," Springer says. "And she was essentially punished for expressing her views."

Click to read Cidney Fisk v. Delta County Joint School District No. 50, et. al.
KEEP WESTWORD FREE... Since we started Westword, it has been defined as the free, independent voice of Denver, and we'd like to keep it that way. With local media under siege, it's more important than ever for us to rally support behind funding our local journalism. You can help by participating in our "I Support" program, allowing us to keep offering readers access to our incisive coverage of local news, food and culture with no paywalls.
Make a one-time donation today for as little as $1.