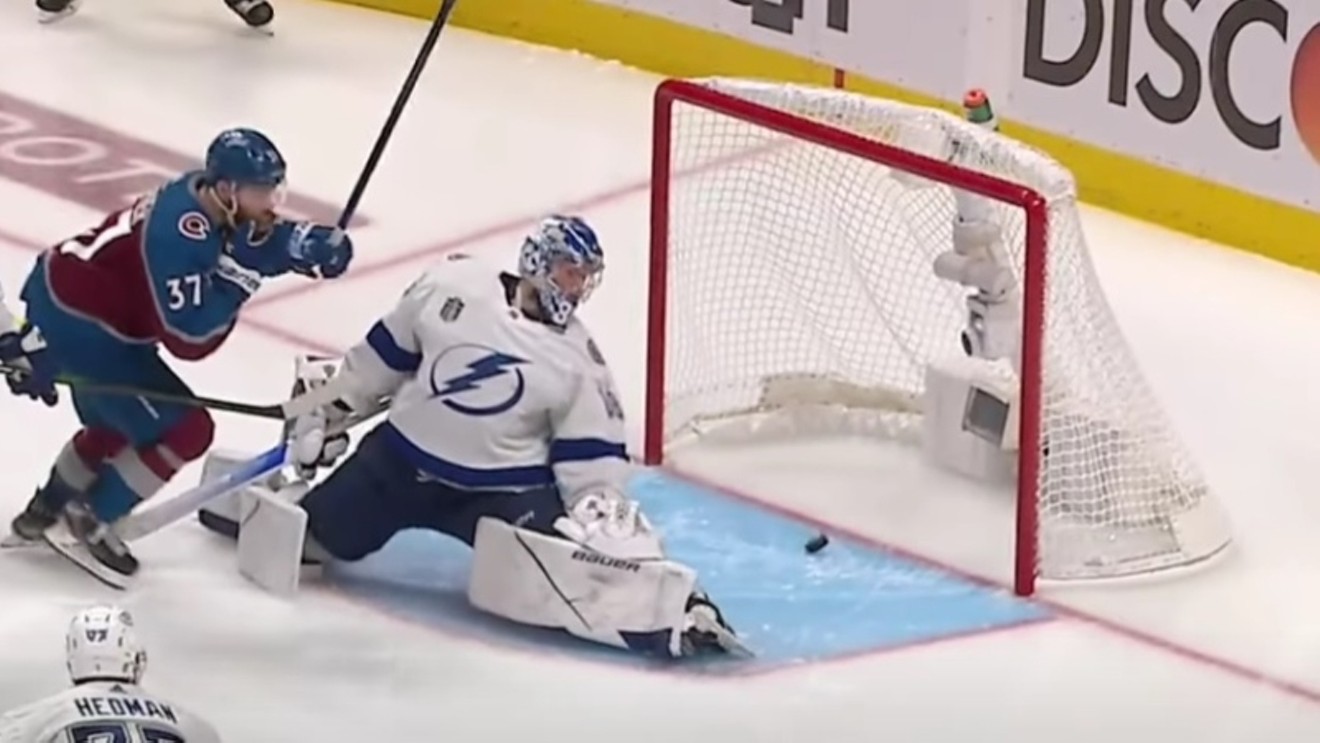 Tampa Bay Lightning goalie Andrei Vasilevskiy seen eyeing the puck that got by him in overtime during last night's Avs victory. NHL via YouTube
Colorado Avalanche fans' reaction to the team's 4-3 overtime win over the two-time defending champion Tampa Bay Lightning in game one of the Stanley Cup Finals is brought to you by the letter "F." Avs boosters on Twitter were so overjoyed by the way the thrillingly nerve-racking June 15 contest ended that their thumbs naturally drifted toward that letter — generally followed by a "U," a "C," a "K" and one or more exclamation points.

The victory wasn't easy to achieve, for many of the reasons outlined in our post about the five things newbie Avs fans need to know about the Lightning — particularly as they applied to outstanding Tampa Bay goalie Andrei Vasilevskiy and his squad's defensive approach.

At times during the NHL Eastern Conference finals, which pitted Tampa Bay against the New York Rangers, Vasilevskiy looked human rather than superhuman, and that was the case during the first period, when the Avs netted three pucks (fired by captain Gabriel Landeskog, Valeri Nichushkin and Artturi Lehkonen) over a span of less than ten minutes. The last of these goals was particularly satisfying, as it took place during a five-on-three power play caused by penalties committed against Avs standouts Nathan MacKinnon and Cale Makar that nearly caused Lightning coach Jon Cooper's brain to melt.

After that, however, Vasilevskiy regained his legendarily intense focus, and his teammates mucked up the pace, stymying the Avs for the next two periods. Meanwhile, Colorado goaltender Darcy Kuemper, back in the lineup after recovering from what was termed an upper-body injury against the Edmonton Oilers, was his usual okay-but-not-great self, allowing three Tampa Bay goals on just 23 shots (as compared to 38 for Vasilevskiy). As a result, the score was tied 3-3 at the end of regulation.

But during the post-season, overtime has been winning time for the Avs, and when Andre Burakovsky took advantage of a Lightning turnover and slapped a shot past Vasilevskiy after just over a minute of skating, Ball Arena went off like Mount Vesuvius.

Similar eruptions occurred on Twitter, and they weren't limited to loyalists in Colorado. Thanks in part to an antipathy for Tampa Bay in general and the Lightning in particular, the Avs have clearly been embraced around the hockey world — and the joy expressed was both palpable and profane. Count down the following twenty tweets to see what we mean.

I really hope the #AVS win the #StanleyCup cup so the #TorontoMapleLeafs fans can shut the fuck up and stop somehow relating anything and everything the #Lightning do or don’t do back to themselves!

Hopefully people shut the fuck up about how the Avs don’t belong.

Avs taking it back home. Tampa.. honestly.. your franchise speaks for itself. Fuck you Tampa#GoAvsGo!!! Go get that cup Lehky

Fuck the bolts! Never see a team flop so much, so slow paced, I thought this was gonna be a 7 game series, but I think avs got this sooner

At first I thought I’d want Tampa to win because Ryan mcdonagh is a top 5 in my heart aaf but actually fuck that. Go avs

I want Avs in 4 to fully shut Leafs fans the fuck up.

Lost money but fuck it the Avs won https://t.co/YhVLpzkOle pic.twitter.com/0WzsiI9qbJ

LETS FUCKING GOOOOOO, IM SO HAPPY, PRETTY SURE I HURT MY JAW BUT FUCK IT, LETS GO AVS BABY