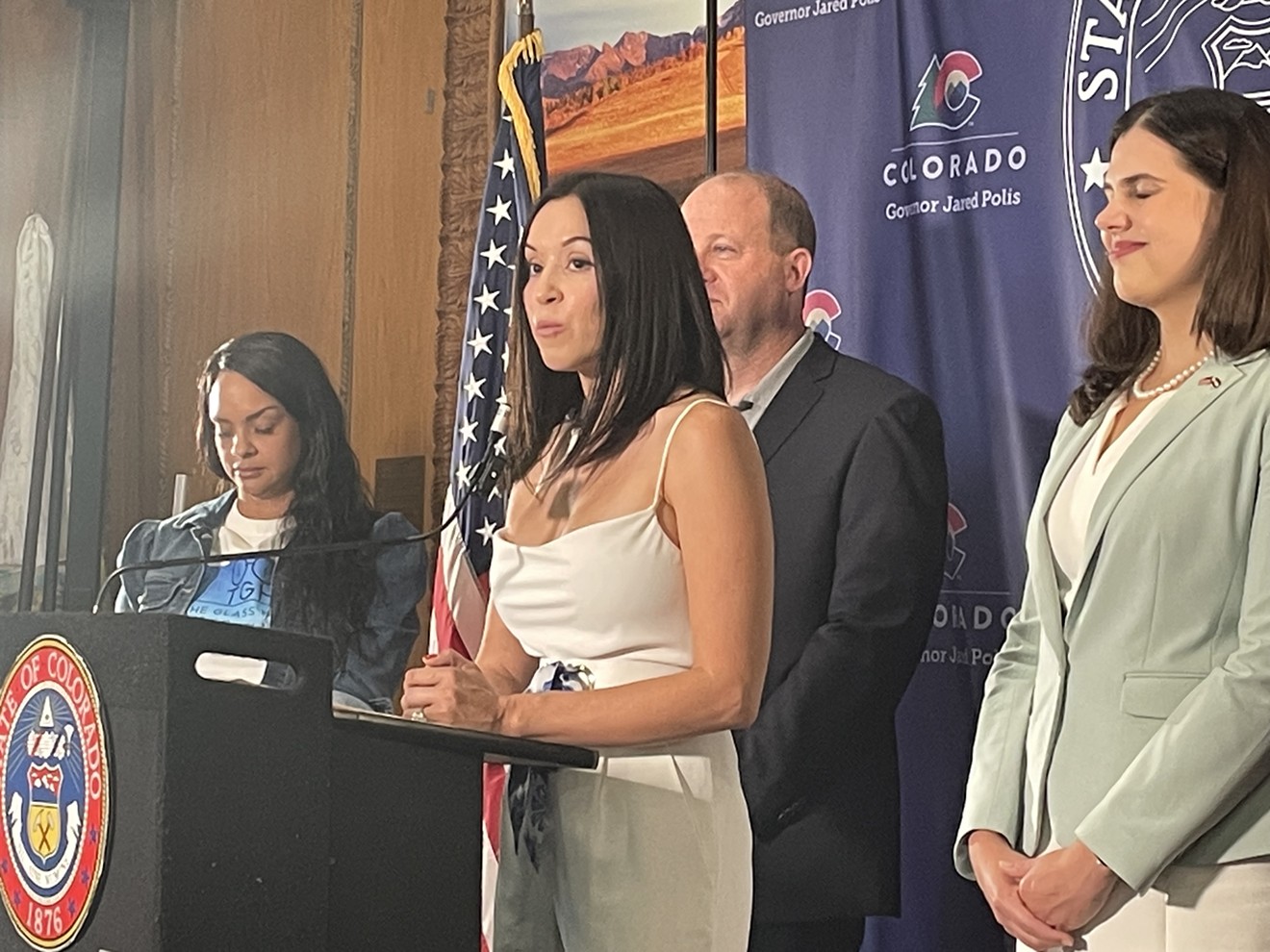 Selene Nestor speaks at a press conference in Governor Jared Polis's office. Katrina Leibee
Selene Nestor, head of the Hispanic Restaurant Association, just registered her new business, Olta Mexican Whiskey, with the State of Colorado for one dollar. By October, she's hoping to open a brick-and-mortar store where she can sell her product.

"Everybody thinks about tequila when they think Mexican liquor, and most Mexicans actually drink whiskey," she says, explaining why she wanted to start Olta. "It’s a huge part of our culture that nobody really talks about."

Under Colorado's new Business Fee Relief Act, which was signed into law in May and went into effect on July 1, an entrepreneur only needs to pay one dollar in order to register a new business with the state; the previous fees ran $50 to $75.

According to Secretary of State Jena Griswold, who spoke at an August 8 press conference at Governor Jared Polis's office celebrating the program, between July 1 and August 5, more than 13,000 new LLCs formed in Colorado. While there are no statistics regarding how many businesses formed as a direct result of the fee relief, state officials estimate the new rate will save small-business owners around $8 million over the next year.

"It's nearly free to start a business in Colorado," said Governor Jared Polis.

For Nestor, who also spoke at the press conference, every little bit helps as she comes up with the roughly $200,000 it will take to get her store open. "The business is up and running, the whiskey is in production and it's already being bottled," she says. While she would have registered that business even at the higher cost, the fee relief inspired her to do it sooner. With the $50 she saved, she bought some Google ads to market her business.

Scott Thomas registered his new business in July; he says he's spending a total of $1,000 to open Grappolo Wine School, a mobile business that will go to people's houses and offices to host wine education classes and events. While the old fee amount wasn't a deterrent to starting a business, the reduction came as a nice surprise, he says. He used the savings to buy an extra case of wine glasses.

Stacey Harris, owner of the Glass House on the 16th Street Mall, will relaunch her business in the Cherry Creek Shopping Center soon. "This $50, it means a lot to me, because I put every dime into this store," she says.

"It’s also important to educate people how low the barrier is to starting a new business," Polis concluded. "If you have this idea in your head or [are] even thinking about it, now is a wonderful time to be an entrepreneur."
KEEP WESTWORD FREE... Since we started Westword, it has been defined as the free, independent voice of Denver, and we'd like to keep it that way. With local media under siege, it's more important than ever for us to rally support behind funding our local journalism. You can help by participating in our "I Support" program, allowing us to keep offering readers access to our incisive coverage of local news, food and culture with no paywalls.
Make a one-time donation today for as little as $1.
Katrina Leibee, a recent graduate of Colorado State University, is an editorial fellow at Westword, covering politics, business and culture.
Contact: Katrina Leibee
Follow:
Twitter: @katrinaleibee