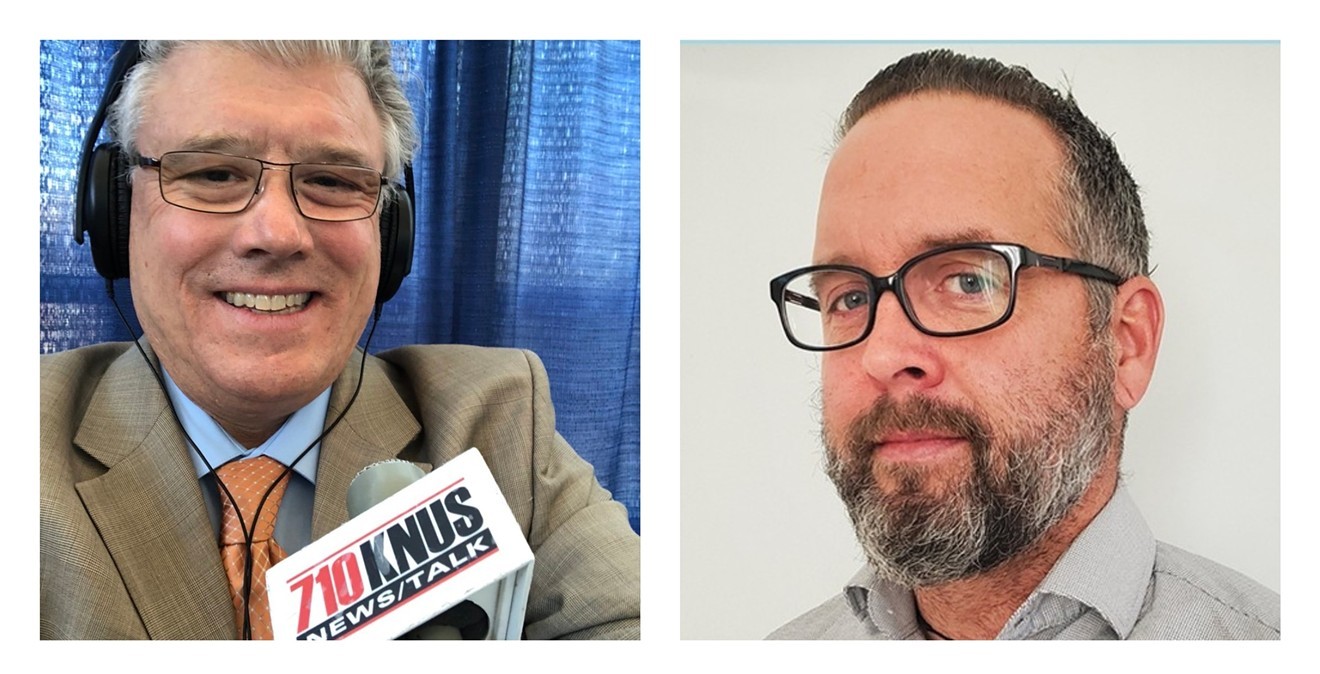 KNUS talk show host and attorney Randy Corporon is among the defendants in a lawsuit filed by former Dominion Voting Systems executive Eric Coomer. @randycorporon/Courtesy of Eric Coomer
November 8 is election day, and while polls suggest that there won't be a lot of suspense regarding Colorado's races for governor, the U.S. Senate and House of Representatives, state Republicans are hoping they'll be able to flip enough seats to gain majorities in the General Assembly.

They're getting plenty of support from talk radio. The medium has been dominated by conservative voices for decades, but during this cycle, many of the commentators deny the validity of the 2020 vote. Some of the most prominent are on 710 KNUS, whose parent company, Salem Media Group, is seen as a growing national platform for election deniers — the subject of a lawsuit filed against Salem and KNUS host Randy Corporon in November 2021.

"The Rise of a Conservative Radio Juggernaut," published by the New York Times last month, takes a tour of battleground states with Salem personalities such as Sebastian Gorka, Charlie Kirk, Hugh Hewitt and Dennis Prager, whose syndicated shows are all part of KNUS's roster. "Created as a Christian radio network nearly 50 years ago by two brothers-in-law," it reads, "Salem has quietly turned into a conservative media juggernaut as it increasingly takes an activist stance in the midterm elections. The company has publicly said it wants a strong turnout of conservative voters for November 8, and its hosts have amplified the messages of conspiracy theorists, including misinformation about the voting process."

While Salem, which has a market capitalization of $45 million, is much smaller than competitors such as iHeartMedia, which has a sizable footprint in Denver, the Times cites the firm's "blend of right-leaning politics and Christian content," as well as a "vast network of 100 radio stations and more than 3,000 affiliates, many of them reaching deep into parts of America that don’t engage with most mainstream media outlets." But it also points out that "Salem has faced legal challenges as its hosts have discussed conspiracy theories about voter fraud," including lawsuits filed by Eric Coomer, former executive director of Dominion Voting Systems, "for defamation after being accused on air of perpetuating voter fraud and joining the left-wing antifa movement."

The November 2021 Colorado lawsuit maintains that KNUS and Corporon jointly "elevated Dr. Coomer into the national spotlight, invaded his privacy, threatened his security, and fundamentally defamed his reputation through a relentless election fraud campaign."

As evidence, the complaint shares some of the responses to a November 21, 2020, Reddit post making the specious assertions against Coomer. They include: "Fking maggot," "His fucken face makes me so fucken mad. FUCK HIM!! TRUMP WON!," "A good mug for USA’s Top 10 Terrorist list. Wanted DEAD or ALIVE" and "This man will be dead within 2 weeks."

According to the suit, Salem's alleged sins include providing a platform for Joe Oltmann, described as a "Colorado-based conspiracy theorist," whose tales about a fictional partnership between Dominion and antifa organizations to steal the presidency for Joe Biden were among the major reasons Coomer went into hiding after the 2020 election.

But while Corporon endorsed such theories — saying at one point, "Joe, what you have done and exposed may save the republic, or at least save the possibility of having an honest outcome to this election" — Peter Boyles, another KNUS radio personality who chatted with Oltmann, has been far more critical of fraud fairy tales. Indeed, the suit quotes Boyles as saying, "The center of the conspiracy is all here. A river runs through it. This stuff all generates at this radio station and comes through this radio station." He added that "a list of people remain, and many of them appear here at this radio station again and again and again."

The suit's comment about this statement: "Unfortunately, Boyles’ moment of candor was not shared by all at 710 KNUS, and other Salem Media hosts continue to promote the falsehoods about the election generally and Dr. Coomer in particular. As a result, the harm that Salem Media has caused Dr. Coomer with its reckless, incessant drumbeat of falsehoods across numerous programs for months on end is irreparable. Dr. Coomer’s successful career in election security is over, and the constant death threats that persist even now will remain an indelible trauma for the rest of Dr. Coomer’s life."

Salem Media vice president and general manager Brian Taylor, Corporon and Boyles have all declined to comment about the lawsuit.

Of course, KNUS is hardly the only Denver-area radio station to broadcast programs hosted by yakkers who either believe Donald Trump won the 2020 presidential election or essentially offer aid and comfort to those who do. Take two signals that operate under the iHeartMedia umbrella: KHOW, at 630 AM, which makes the Fox News Rundown a prominent part of its schedule, and Freedom 93.7, the local home of Glenn Beck and Sean Hannity.

All of the stations tend to appeal to older listeners, who are very likely to participate in midterm elections. Should Colorado's House and Senate have a Republican majority after the final votes are counted, or if GOP pols dispute the results after losing, these outlets could be a big reason why.

Click to read Eric Coomer v. Salem Media of Colorado and Randy Corporon.
KEEP WESTWORD FREE... Since we started Westword, it has been defined as the free, independent voice of Denver, and we'd like to keep it that way. With local media under siege, it's more important than ever for us to rally support behind funding our local journalism. You can help by participating in our "I Support" program, allowing us to keep offering readers access to our incisive coverage of local news, food and culture with no paywalls.
Make a one-time donation today for as little as $1.