The Name Game Heats Up at the Colorado Capitol

There are at least five outstanding name change requests for Mount Evans. YouTube
While statues are being toppled around town and Stapleton residents are about to become part of a new neighborhood, some landmark decisions are on hold...because Colorado doesn't have an official naming board.

The seemingly insignificant entity was eliminated years ago by then-governor, now-Senate candidate John Hickenlooper, who'd first run for Denver mayor in 2003 on a promise to get rid of the "fundamental nonsense of government" and then continued to cut what appeared to be excess silliness at the Colorado Capitol. But when responsibility for the Colorado Board on Geographic Names disappeared from the Colorado State Archives after the longtime state archivist retired, so did the opportunity for the U.S. Board on Geographic Names to consult with the state on any proposed name changes for rivers, mountains, valleys and other physical locations (not buildings, not statues, not neighborhoods) within the state.

According to BGN geographer Jennifer Runyon, Colorado is the only state lacking such an entity. And while she's been waiting for Colorado to name a naming board (it doesn't need to be any more formal than a person charged with considering the requests made to the BGN on behalf of the state), cases have been piling up in her office from around the country as people take a long, hard look at our nation's more questionable history.

Two of the most controversial Colorado cases involve requests to rename Mount Evans, which was transformed from Mount Rosalie in 1895 to officially honor John Evans, the territorial governor on November 29, 1864, when over 200 members of the Cheyenne and Arapaho tribes were massacred in a peaceful camp on Sand Creek. One request, made over two years ago, wants to rename the peak Mount Cheyenne Arapaho; another that dates back almost as far is pushing for Mount Soule, in honor of Captain Silas Soule, who refused to participate in the attack at Sand Creek and later testified before Congress about the atrocities committed there by Colorado John Chivington's volunteers. Even during the horrors of the Civil War, Congress recognized that Sand Creek rose to the level of a "massacre," and forced Evans to resign. Less than six months later, Soule was assassinated on the streets of Denver. Thirty years later, Evans's name was elevated to a Colorado fourteener. Fifty-four years later, the Colorado Pioneers Association installed the Civil War Monument at the Colorado Capitol; it labeled Sand Creek a "battle." 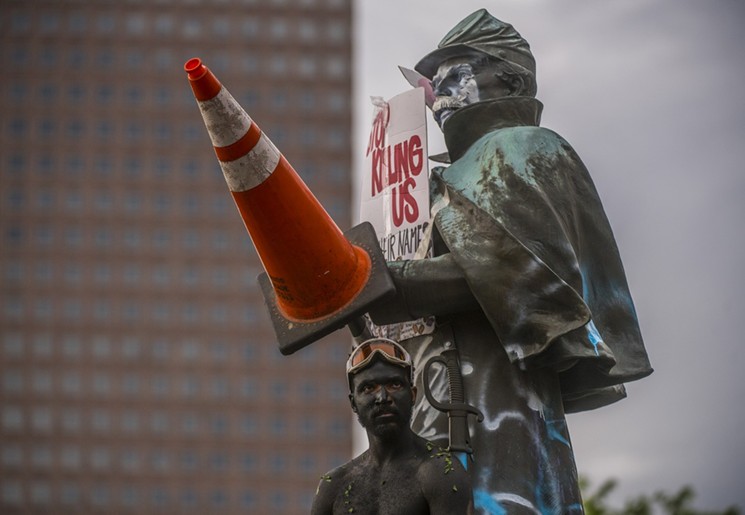 The Civil War Monument at the Colorado State Capitol on day four of the protests.
Evan Semón
While the BGN has been waiting to consult with Colorado's nonexistent naming board on those requests, it's reached out to tribal representatives, as well as various other governmental entities involved in the area: Denver Parks and Recreation, since Mount Evans is home to a Denver Mountain Park; the U.S. Forest Service; Clear Creek County. In the meantime, the Wilderness Society is exploring asking Congress to rename the peak Blue Sky. And just last month, a pair of new Mount Evans renaming petitions showed up on Change.org. Says one: "Mount Evans needs to be renamed. It is unacceptable to have a mountain named after an individual who heavily influenced, encouraged, and perpetrated the genocide of Native Americans. His actions and leadership directly played a role in the Sand Creek Massacre. We, as a state and community, should no longer accept that his name is glorified. It is time to let Tribes and Indigenous Peoples determine an appropriate name for the mountain."

A screen capture from a Twitter video showing the burning statue base outside the Colorado State Capitol late on June 26.
@pinklaurenade
But suddenly, name changes have moved to the front burner at the Colorado Capitol — literally, since the base of the Civil War Monument was torched last week, just days after the statue itself was toppled. (The explanatory plaque explaining why Sand Creek was actually a massacre remains.) And that's apparently lit a fire in the governor's office, which finally offered a response to my queries about the missing naming board late last week.

"We are aware of requests to the U.S. Board on Geographic Names to rename a number of geological features in Colorado, including Mount Evans," says Conor Cahill, spokesman for Governor Jared Polis. "The State has not had for a number of years a state naming board, and we are currently evaluating the best process to move forward that is well represented, inclusive, and transparent to ensure a broad spectrum of Coloradans, local communities and Colorado’s land-based Tribes can collaborate on any potential renaming of Colorado geological points or landmarks. The goal of the administration is to have a plan in place by the first week of July."

Which would not a moment too soon, as this name game is really heating up.

And in fact, on July 2, Governor Jared Polis issued an executive order noting that he has created a fifteen-member Colorado Geographic Naming Advisory Board, with a diverse membership that should be able to wrestle with the trickiest topics. “This new board will play a critical role in the ongoing celebration of our Colorado history through place names and ensure that we have inclusivity and transparency around the naming process,” Governor Jared Polis said in announcing the board. “This bi-partisan board will ensure that a broad spectrum of Coloradans, local communities, and Colorado’s land-based Tribes can collaborate on any potential naming or renaming of Colorado geological points or landmarks.”

Update: This story was updated at 2 p.m. on July 2, to add the just-released executive order from Governor Jared Polis.
KEEP WESTWORD FREE... Since we started Westword, it has been defined as the free, independent voice of Denver, and we'd like to keep it that way. With local media under siege, it's more important than ever for us to rally support behind funding our local journalism. You can help by participating in our "I Support" program, allowing us to keep offering readers access to our incisive coverage of local news, food and culture with no paywalls.
Make a one-time donation today for as little as $1.