Travel Back in Time With Colorado Inside Out Tonight

Dominic Dezzutti (from left), some very bad actress, David Kopel, Natasha Gardner and Kevin Flynn, circa 1876. cpt12.org
Too stuffed to leave that armchair tonight? Not to worry: You don't have to move a muscle in order to take a trip back in time.

Every year, Colorado Inside Out, the weekly public-affairs show on Colorado Public Television that just marked its 25th anniversary, transports the cast and crew to a significant year in this state's history; these Time Machine programs have netted the station a handful of regional Emmys (despite my very bad acting). And to give the hardworking crew a night off on Thanksgiving weekend, CPT12 offers a marathon Time Machine Special every year.

This year's trip kicks off at 7 p.m. with "Circa 1876," which goes back in time to the nation's centennial and the year Colorado became a state. Custer's infamous battle and a presidential election still in doubt in late November dominate the headlines; the cast of characters includes the cuckolded Augusta Tabor; William Byers, the founder of the Rocky Mountain News; Colorado's very first "First Lady" and even the Colorado Railroad Museum.

"Circa 1940" follows at 7:30 p.m, taking the characters back to the year before the United States entered World War II and the country was still struggling to get out of the Depression.

cpt12.org
At 8 p.m., tune in for "Circa 1968," a trip back to the year of the Summer of Love, when Hair debuted on Broadway and both Martin Luther King Jr. and Robert F. Kennedy were assassinated. (This, by the way, is a redo of an earlier 1968 episode, hosted by Peter Boyles, in which Dani Newsum and I laugh uncontrollably for a good ten minutes. With any luck, that installment may never again see the light of day.)

At 8:30 p.m., the cast travels back to 1917, the year that Buffalo Bill Cody passed away, the U.S. entered the Great War and Mayor Robert Speer was promoting parks and civic construction around Denver. 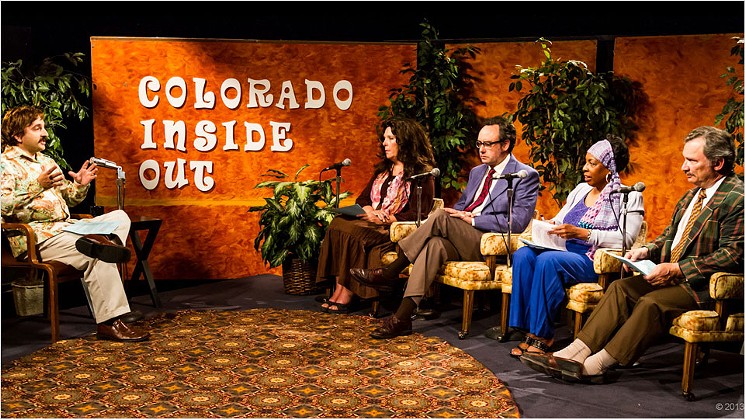 cpt12.org
At 9 p.m., the marathon concludes with an extended edition of "Circa 1973." The program itself tackles the progress of the Equal Rights Amendment, controversy over the Crusade for Justice and Chicano rights movement, court-ordered busing for Denver Public Schools, the Watergate scandal and the surprise stardom of Denverite Judy Collins (played by guess who?).

The segment is followed by interviews with people who were a big part of the news in 1973, including Richard Lamm, who led the campaign to take Colorado hosting the 1976 Winter Olympics to a statewide vote, a platform that elevated him to the governor's office the next year.

All of the Time Machine episodes have been produced by Larry Patchett, who's said that the new "Circa 1968," filmed this past June, would be the last in the series. But there are hints that he could be persuaded to change his mind. Tune in and turn on tonight, then share your thoughts at cpt12.org.
KEEP WESTWORD FREE... Since we started Westword, it has been defined as the free, independent voice of Denver, and we'd like to keep it that way. With local media under siege, it's more important than ever for us to rally support behind funding our local journalism. You can help by participating in our "I Support" program, allowing us to keep offering readers access to our incisive coverage of local news, food and culture with no paywalls.
Make a one-time donation today for as little as $1.