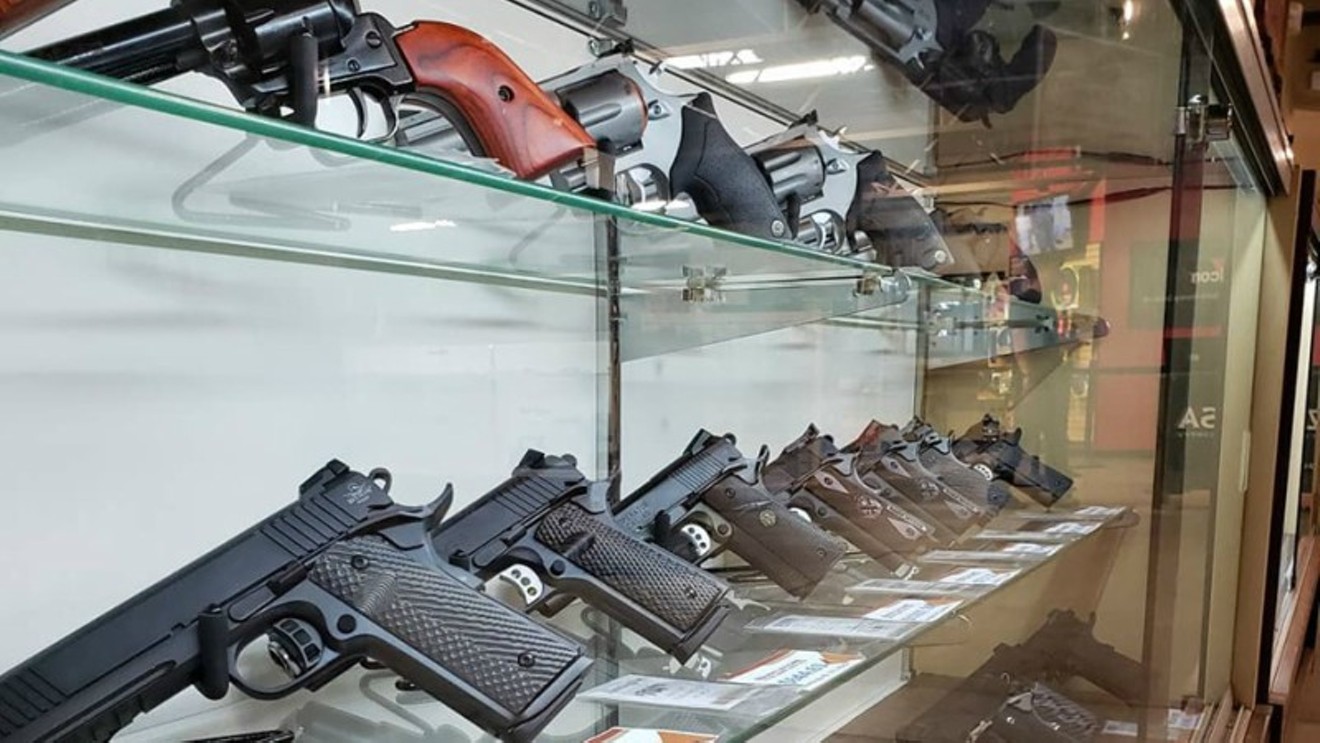 Firearms for sale at Bristlecone Shooting, Training & Retail Center in Lakewood. Bristlecone Shooting, Training & Retail Center
The political arguments surrounding guns are among the most divisive in Colorado. Look no further than the reaction to the implementation of the state's red flag legislation, which creates a framework in which guns can be temporarily taken away from those deemed a danger to themselves and others. Even before the law took effect on January 1, it contributed to unsuccessful recall efforts aimed at Governor Jared Polis and Representative Tom Sullivan, whose son, Alex Sullivan, was among the twelve victims of the July 2012 Aurora theater shooting — and afterward, Fort Collins's Susan Holmes stirred controversy when she filed an Extreme Risk Protection Order against the CSU police officer who shot and killed her son Jeremy in 2017. Holmes, who denies any wrongdoing, was subsequently arrested on a warrant for perjury.

So it's something of a shock to find local gun retailers, law enforcement agencies and mental health professionals, among others, joining forces in the Colorado Firearms Safety Coalition, which is currently building a network of locations at which the friends, families and loved ones of potentially suicidal individuals can store weapons until they believe the risk has passed.

Gun storage is a hot topic in the legislature right now, thanks to the recent introduction of House Bill 20-1355. Also known as "Secure Storage of Firearms," the measure, sponsored by four Democrats (representatives Monica Duran and Kyle Mullica, and senators Jeff Bridges and Chris Hansen), would create a misdemeanor penalty for those found to have stored a gun "in a manner that the person knows, or should know, that a juvenile can gain access to the firearm without the permission of the juvenile's parent or guardian; or a resident of the premises [who] is ineligible to possess a firearm under state or federal law."

The coalition hasn't taken a position on that bill or any others, because the group is apolitical. "Everybody has very different political views, backgrounds and professions," says Jacquelyn Clark, a coalition members who is co-owner of Lakewood's Bristlecone Shooting, Training & Retail Center. "But we've all come together with the common goal of trying to prevent suicides, and doing it through restricting access to lethal means when someone is in crisis."

Dr. Emmy Betz, a staffer at the University of Colorado School of Medicine who helped launch the organization in 2015, sees the group as a natural outgrowth of her professional work. "I'm an emergency physician," she says, "and I do a lot of research and education efforts related to suicide prevention, and especially firearms suicide prevention."

Betz and Clark founded the Colorado Firearms Safety Coalition in conjunction with the Colorado Department of Public Health and Environment's Sarah Brummett and Jarrod Hindman, both of whom work in the state's Office of Suicide Prevention, as well as the University of Colorado School of Medicine's Dr. Michael Victoroff and Dick Abramson of Centennial Gun Club.

Betz likens the gun-storage idea to "using a designated driver. If you're out on a Friday night and your buddy has had too much to drink, and you're a good friend, you make sure he doesn't drive. You drive him home or get him a Lyft — and most people wouldn't jump to calling the police to take away his license in that case. Now, if you have a family member or a friend who you know is a persistent risk and isn't willing to turn over the car keys, it makes sense to have a legal option for the police to step in. But in suicide prevention, a lot of times we can look to voluntary-type options, so that family members can make the choices themselves before you get to a law enforcement issue."


Right now, 48 gun ranges and/or retailers and seventeen law enforcement agencies, plus two other businesses (a vault and safe-deposit box firm, and a police supply company) are participating in the coalition's program, which was announced last year in conjunction with the map's debut. But questions about it remain.

"A really valid concern that has come up is one of liability," Betz allows. "Shops ask, 'How do I know when it's safe to give a firearm back?' Law enforcement agencies have the same question: 'How do I know? What if the person dies by suicide a month later, or six months later?' I don't have a good answer for that. And law-enforcement agencies have also brought up the question of financing — not just for space, but also because they sometimes have to pay for background checks when people come to pick up their weapons."

Background checks have led to another concern. Gun shops with enough private lockers to let people store their firearms personally don't need to go through the process, since they haven't technically taken possession of the weapons. But the majority of businesses taking part in this program don't have this option and must require people to go through a background check when they pick up the firearms in order to conform with federal law. That's led to rumors that the state is creating a stealth gun registry that might take advantage of the red flag law, which Clark says is absolutely not the case.

"There's no connection" between the gun-storage offer and the red flag law, she stresses. "We are simply offering a service, whether it's for somebody who has a loved one in a time of crisis or even grandparents who are going to be watching their grandkids for an extended period of time and don't have storage on premises."

Thus far, there hasn't been a rush to take advantage of the storage program. Still, Betz sees positives in the way the coalition has brought so many disparate parties together — and she believes there's more common ground on the subject among Coloradans in general, no matter how they feel about guns.

"One thing I try to remind people about, especially in this polarized debate, is that nobody wants to lose a family member," she emphasizes. "People who own firearms don't want their loved ones killing themselves, either, and that piece can get lost. So this is about how we can all work together to keep their family members safe."
KEEP WESTWORD FREE... Since we started Westword, it has been defined as the free, independent voice of Denver, and we'd like to keep it that way. With local media under siege, it's more important than ever for us to rally support behind funding our local journalism. You can help by participating in our "I Support" program, allowing us to keep offering readers access to our incisive coverage of local news, food and culture with no paywalls.
Make a one-time donation today for as little as $1.