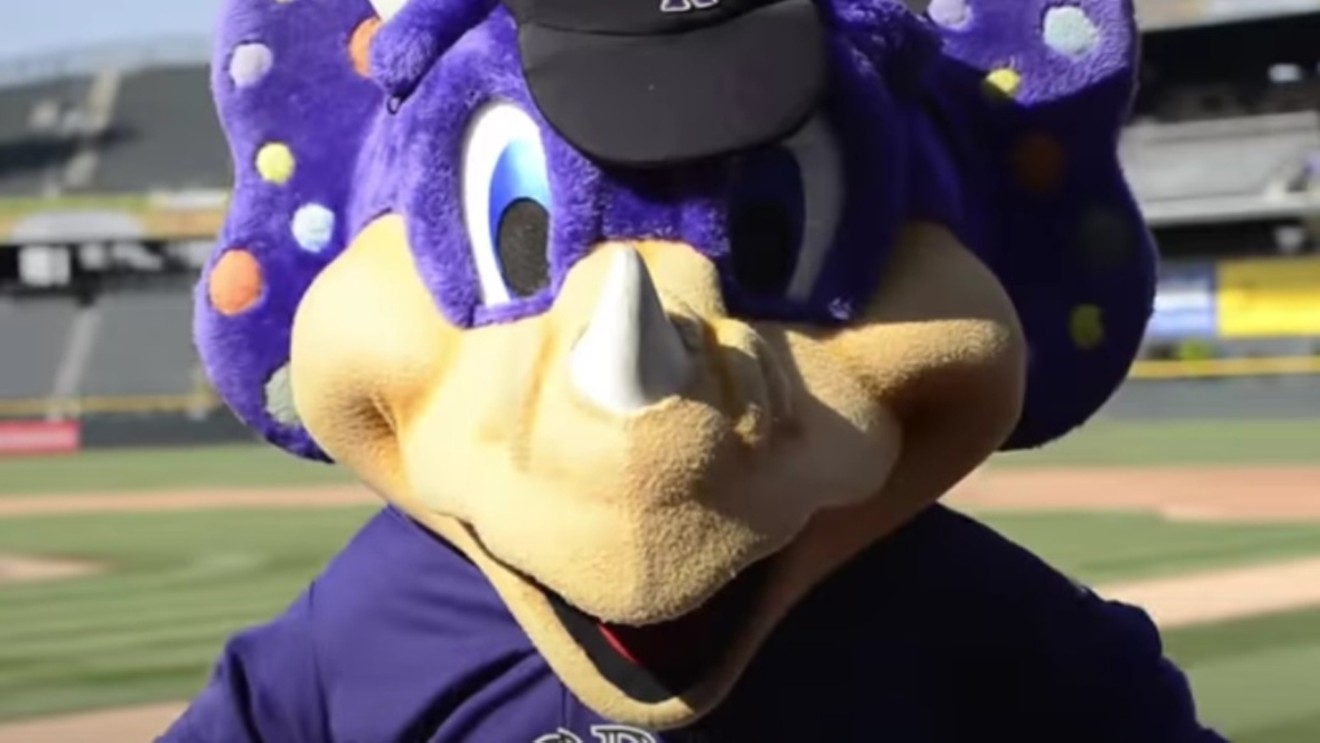 Worst. Mascot. Ever. YouTube
The tremendous ineptitude of the 2021 Colorado Rockies has ensured that the team has gotten little national attention beyond Denver hosting the Major League Baseball All-Star Game last month. But over the past two days, the woeful squad has been highlighted in coast-to-coast headlines, and on ESPN's constant on-screen news crawl, for the dumbest reason possible: false claims that a fan yelled a racial epithet commonly referred to as the "N-word" at Miami Marlins outfielder Lewis Brinson near the end of the Rockies' 13-8 victory on August 8.

Turns out that the actual word the fan was yelling was "Dinger," because he wanted the Rockies' purple dinosaur mascot to pose for a photo with his grandkids.

This revelation inspired a head-snapping turnabout from the Rockies, whose original tweet essentially confirmed that the N-word had been dropped, as well as some nasty trolling from right-wingers on social media and in the conservative blogosphere eager to blame the entire controversy on the PC press.

But I'd rather point the finger at Dinger, the worst mascot in the history of American sports — a sad reality of which every sports lover in the nation has now been reminded.

Here's a video of the original incident, which took place during Brinson's at-bat:
The word uttered by the fan wasn't entirely clear, beyond the fact that it was two syllables long and ended with "er." But the possibility that the N-word had been shouted at a player of color fit in with recent fan attacks on NBA players cited in this post from the Undefeated; Trae Young was spit upon, Russell Westbrook was showered with popcorn, and Ja Morant's family became the target of racial epithets.

Following these incidents, the Philadelphia 76ers, the New York Knicks and the Utah Jazz responded by permanently banning the assorted instigators — and the Rockies made it clear that they planned to follow a similar course regarding the Brinson episode in this tweet, issued after the August 8 game.


A statement from the Colorado Rockies regarding the racial slur incident at the end of today's game: pic.twitter.com/85uN3f1pFZ

Rather than revealing racism, however, the Rockies inquiry confirmed that the whole thing had been a big mistake. Hence this follow-up tweet on August 9:


An update from the Colorado Rockies regarding the incident at the end of yesterday's game: pic.twitter.com/4cCS8peKnU

Typical of the nasty fallout was this item from TB Daily News, labeled, "Online Mob Attacks Grandfather For Yelling Racial Slur At Rockies Game After He Tried To Get Mascot To Pose For Picture With Grandkids."

There have been legitimate controversies over racial slurs in Colorado sports, but most of them have involved players and coaches, not fans. Back in 2000, former Bronco Bill Romanowski was accused of using the N-word. The next year, Denver Nuggets head coach Dan Issel, a onetime superstar player for the franchise, essentially destroyed his career after being captured on video yelling "Go drink another beer, you Mexican piece of shit" at a Hispanic ticket holder. And in 2014, Broncos defensive lineman Terrance "Pot Roast" Knighton, who is Black, was fined $11,025 for allegedly vocalizing the N-word during a game against the New York Jets.

The grandfather in this case was guilty of nothing more than thinking that a photo with Dinger, a moronically smiling, roly-poly ripoff of Barney, star of a brain-deadening children's show that ended production in 2010, was a good idea.

The embarrassment of the past couple of days won't convince the Rockies to dump Dinger. But until my dream of Dinger winding up on the mascot scrap heap along with Huddles, the largely forgotten Broncos character once portrayed by future Mayor Michael Hancock, is finally realized, I'll cling to my favorite memory of a Rockies game. Years ago, I was sitting along the third-base line when a batter lined a shot in my direction. But between the ball and the seats was Dinger, standing atop the dugout — and when the orb struck him in the snout, it turned his head sideways like Linda Blair in The Exorcist.

Wish I had a photo (or a video) of that.
KEEP WESTWORD FREE... Since we started Westword, it has been defined as the free, independent voice of Denver, and we'd like to keep it that way. With local media under siege, it's more important than ever for us to rally support behind funding our local journalism. You can help by participating in our "I Support" program, allowing us to keep offering readers access to our incisive coverage of local news, food and culture with no paywalls.
Make a one-time donation today for as little as $1.