The number of individuals treated for the three reportable STIs — chlamydia, gonorrhea and syphilis — was highest in Denver during 2017, the most recent year for which full data is available; the annual report is accessible below. But the rates of infection in many rural areas often exceeded those in more populous areas.

"If you simply count, there were thousands of cases of chlamydia in Denver metro and 100 or fewer in other regions of the state," notes Dr. Daniel Shodell, the CDPHE's deputy director for disease control and environment epidemiology. "So you think, okay, then the focus is on urban areas. But when you adjust for population, you can see there are multiple parts of the state where there are significant concerns."

Colorado's STI rates as a whole aren't among the nation's worst. Indeed, a study by the federal Centers for Disease Control and Prevention also linked at the bottom of this post finds the state at number 28 among the fifty states for rate of chlamydia, number 27 for gonorrhea and number 33 for primary and secondary syphilis. But Shodell suggests that analytics of this sort can be deceptive. 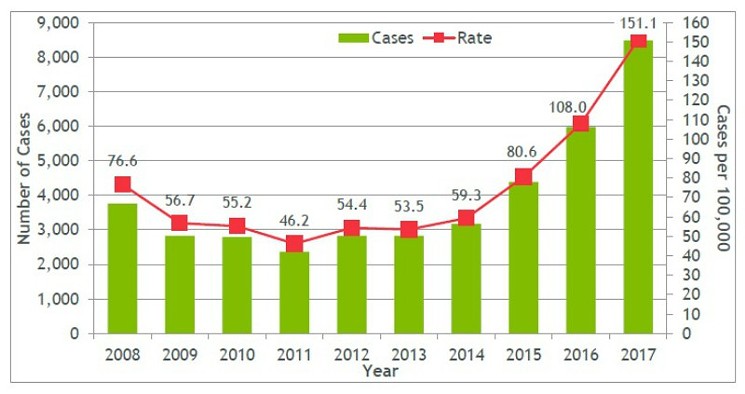 This graphic depicts reported gonorrhea cases and rates of reported cases in Colorado from 2008 to 2017.
Colorado Department of Public Health & Environment
"We don't stand out as a problem in the context of the overall U.S. burden of STIs," he says. "But when you look at the rate of increase, it's alarming."

The CDPHE document's executive summary underscores this point. In 2017, there were 36,291 newly reported STI cases: 26,995 involving chlamydia, 8,478 pertaining to gonorrhea and 818 dealing with all stages of syphilis. Those are the highest figures ever recorded in the state for each of the three conditions.

Shodell stresses that the infections don't discriminate. "There's no race, no ethnicity, no sexual orientation that's safe from STIs in Colorado. Syphilis is a good example. That's really impacting men who have sex with men, primarily, but we're seeing increases in syphilis among women of reproductive age, too. It's not a big number yet" — from fewer than thirty in 2013 to more than seventy in 2017 — "but it's still a major concern." 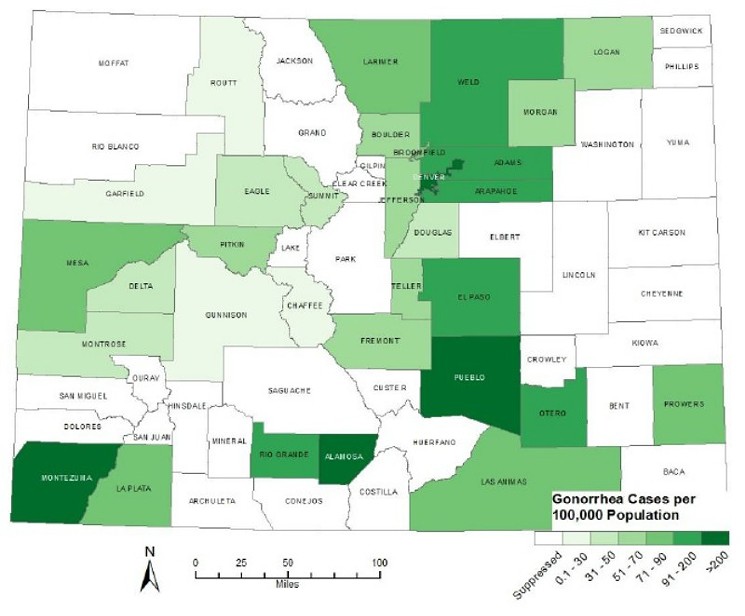 This map displays rates of reported gonorrhea cases by county in 2017. Dark green represents the highest rates, as seen in counties such as Pueblo, Montezuma and Alamosa.
Colorado Department of Public Health & Environment
Age doesn't exempt Coloradans from STIs, either, as indicated by one of the report's most startling revelations: Eighteen newborns were diagnosed with congenital syphilis in the 2013-2017 range.

Why are these stats getting so much worse? Shodell says medical professionals like him are considering several different theories.

And then there's what Shodell refers to as "the role of stigma and discrimination overall. The fact that people don't want to talk about STIs may lead to them not seeking care in a timely manner. Any and all of these ideas are likely in play."

As for how to reduce these numbers, Shodell believes that "awareness is a big part of it. We want folks to know that STIs are up, so they know they need to test and treat themselves — and use a condom every time. We also want to see local responses, including increased funding to jurisdictions that are most heavily increased and better access to treatment, so that people can be treated quickly. And we want to do better partner identification and notification, which is something the state does with disease intervention specialists. We have people go into the field and interview folks who may have been newly diagnosed so we can let partners know, 'You might want to seek testing, because you might have been exposed.'" 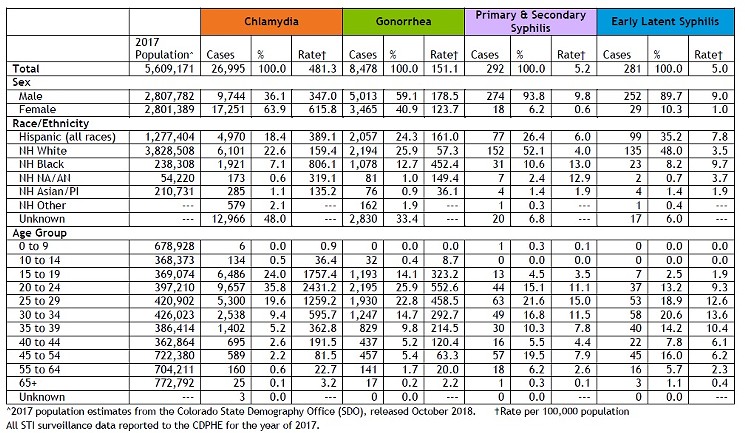 The raw numbers in regard to reported chlamydia, gonorrhea and early syphilis cases in 2017, sorted by demographics.
Colorado Department of Public Health & Environment
In addition, he goes on, the CDPHE wants to "work more with providers, to make sure they're aware this is an issue and that they should consider screening among their patient population to make sure they're aware of the risk. With gonorrhea, in particular, we're seeing what we would call an emergence of reduced susceptibility to treatment — and that could mean it's on the road to drug resistance. We haven't seen any treatment failures in Colorado yet, but we don't want to be on that path."

Getting tested and treated for these STIs "is pretty straightforward," Shodell emphasizes. "Nobody likes to go to the doctor, but these aren't difficult tests, and treatment is often a one-time dose of antibiotics. You'll probably get a shot, but then you'll get better."

By doing so, you'll help stop the spread of infections that are all too common in Colorado these days.

Click to read "Sexually Transmitted Infections in Colorado: 2017 Annual Report" and "Sexually Transmitted Disease Surveillance 2017," from the Centers for Disease Control and Prevention.
KEEP WESTWORD FREE... Since we started Westword, it has been defined as the free, independent voice of Denver, and we'd like to keep it that way. With local media under siege, it's more important than ever for us to rally support behind funding our local journalism. You can help by participating in our "I Support" program, allowing us to keep offering readers access to our incisive coverage of local news, food and culture with no paywalls.
Make a one-time donation today for as little as $1.