Photo by Maarten Duineveld on Unsplash
Safety is an important factor at Colorado ski areas, but specifics about the subject are scarce. Resorts tend not to share details about procedures put in place to help prevent worst-case scenarios, much less the number of injuries and even fatalities. Instead, they spotlight the Your Responsibility Code, part of the Colorado Skier Safety Act approved by the legislature in 1979 that outlines a series of recommendations putting skiers in charge of ensuring that they aren't hurt or worse while at a mountain.

No Colorado ski-area deaths have been reported so far this season. But the winter of 2021-2022 saw multiple fatalities, including two at Eldora within a week of each other; a snowboarder criminally charged in one of the incidents, which killed famed skier Ronald LeMaster, has pleaded not guilty in advance of a trial set for January. And at least eleven skier deaths were logged at Colorado resorts over the course of the 2020-2021 season.

Now, an ambitious new project seeks to answer questions about the causes of ski-resort injuries and fatalities: Slide With Respect. Overseen by Tom Miaskiewicz, an associate professor of marketing at Fort Lewis College in Durango, and researched by his students, the ongoing study, which should be completed next year, is exploring a wide variety of safety issues surrounding sliding — a term used to encompass snowboarding and snow biking as well as skiing.

The project's components include a survey that's open through December 15, with questions designed to determine how many skiers even know about the Your Responsibility Code, their feelings about its recommendations, the role safety plays in their decisions about what resorts to visit, and much, much more.

"Our goal is not to necessarily be critical, because a lot of people enjoy going up to the mountains, including myself," Miaskiewicz says. "It's about potentially uncovering how the experience could be better in a variety of ways, but maybe more specifically from the safety angle."

In Colorado, the ski industry enjoys a special status. As noted by Donaldson Law LLC, the Colorado Ski Safety Act grants ski-area operators tort-liability immunity for "injury resulting from inherent dangers and risks of skiing" and only leaves them on the hook "for injuries that result from the operator’s own negligent or reckless actions." This is an extremely high standard that's rarely met, though there are exceptions. In June, an undisclosed settlement concluded a lawsuit over the death of Kelly Huber and injuries to her two daughters after they were hurled from a ski lift at Sky Granby Ranch in December 2016.

The state hasn't established a central repository for information about injuries and deaths at ski resorts, but in December 2020, an organization called Safe Slopes Colorado issued a report using data assembled by the Colorado Department of Public Health and Environment that revealed the impact of accidents in greater specificity than ever before. During the 2017-2018 ski season, for example, ski accidents resulted in more than 8,000 emergency room visits and nearly 1,600 ambulance transports. For an average 120-day season, that breaks down to 66 trips to the ER and thirteen ambulance rides related to skiing every day. 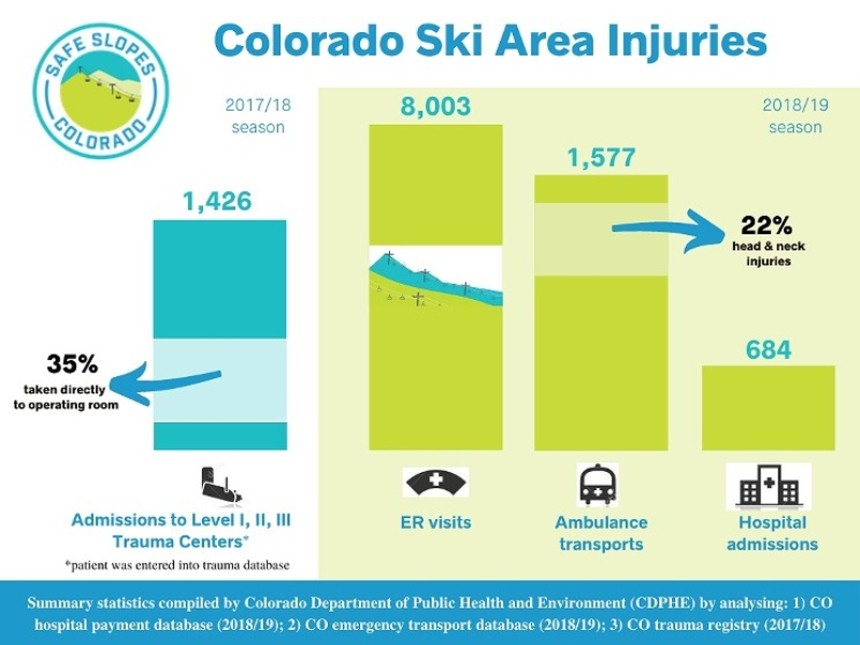 A Safe Slopes Colorado graphic summarizing data from the 2017-2018 ski season.
https://www.safeslopes.org/
Safe Slopes Colorado's efforts were intended to bolster support for Ski Area Safety and Accident Reporting, a bill co-sponsored by senators Tammy Story and Jessie Danielson that would have required each ski area to adopt and publish "a safety plan specifying the governance, management and operational roles, responsibilities and practices of the ski area to prevent accidents and reduce the frequency and severity of injuries," as well as to "collect and make available, upon request, specific information about each accident, including where and when it occurred, the conditions at the time, the type of injuries and whether death occurred on site or following medical transport." But in April 2021, the legislation failed to make it out of committee by a 4-1 vote.

Slide With Respect takes a different approach to the issue of safety at ski resorts. According to Miaskiewicz, the focus is "more on the snow sliders — understanding their perspective and then speaking to them hopefully in a way where we make some kind of impact on people's decision-making on the mountain, so that we can make it a better, safer experience for everybody."

Included in the "high-level research our survey tackles," he says, are "looking at general segments of the population in this space from a safety-on-mountain behavior perspective and understanding whether it's based on ability levels, demographics and where the individuals are skiing. We want to understand what's impacting the potential for injury on the mountain — everything from skill and experience to social media content. And we also want to look at on-mountain issues that might impact behavior, from rules and expectations to policies to design and layout, as far as how slopes come together and the signage around those intersections. The idea is to better understand what's happening that might lead individuals to run into another skier."

Multiple sections of the survey deal with the Your Responsibility Code, which comprises these ten recommendations:


1. Always stay in control. You must be able to stop or avoid people or objects.
2. People ahead or downhill of you have the right-of-way. You must avoid them.
3. Stop only where you are visible from above and do not restrict traffic.
4. Look uphill and avoid others before starting downhill or entering a trail.
5. You must prevent runaway equipment.
6. Read and obey all signs, warnings, and hazard markings.
7. Keep off closed trails and out of closed areas.
8. You must know how and be able to load, ride and unload lifts safely. If you need assistance, ask the lift attendant.
9. Do not use lifts or terrain when impaired by alcohol or drugs.
10. If you are involved in a collision or incident, share your contact information with each other and a ski area employee. 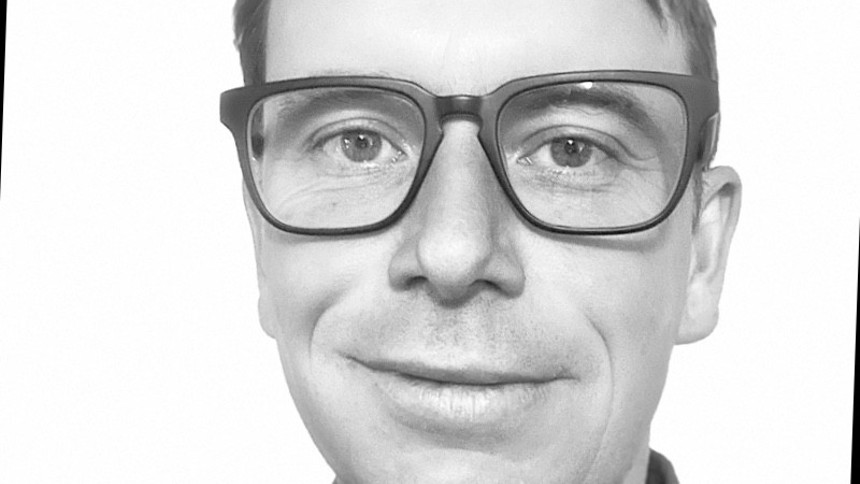 Tom Miaskiewicz is an associate professor of marketing at Fort Lewis College.
LinkedIn
The project is receiving input from several ski-industry pros designated as mentors, including Sven Brunso, director of marketing for LEKI; John DiCuollo of the lifestyle agency Backbone Media; David Ingemie, a past director of marketing for SnowSports Industries; Marty Grabijas, another SnowSports Industries veteran; and Michael Begg, a physician assistant with over 25 years of orthopedic surgical and clinical experience. These professionals will help Miaskiewicz's students interpret their results and figure out how to better promote ski safety, as well as offer advice to ski areas about what they can do to decrease the number of those hurt while on the slide.

"We want to put our research into action, so that individual resorts can better understand what they do well and how messaging can potentially make the experience better," Miaskiewicz says.

Westword has reached out to the National Ski Areas Association and Colorado Ski Country USA for comment about the Slide With Respect project; click to take the survey.
KEEP WESTWORD FREE... Since we started Westword, it has been defined as the free, independent voice of Denver, and we'd like to keep it that way. With local media under siege, it's more important than ever for us to rally support behind funding our local journalism. You can help by participating in our "I Support" program, allowing us to keep offering readers access to our incisive coverage of local news, food and culture with no paywalls.
Make a one-time donation today for as little as $1.