WildEarth Guardians has been keeping an eye on Suncor. WildEarth Guardians / Flickr
A judge in the 17th Judicial District has ordered the Air Pollution Control Division of the Colorado Department of Public Health and Environment to take action on Suncor Oil Refinery’s permit renewal requests without further delay.

The refinery has long been accused of contaminating the environment by releasing toxic chemicals into the air; in 2021 it reached a $9 million settlement with the state for violations of state and federal air pollution laws. The January 10 order issued as a result of a lawsuit filed by WildEarth Guardians, an organization focused on protecting wildlife and health in the western United States, requires that the state's Air Pollution Control Division assess whether Suncor should be granted permits to continue operating.

“It's the poster child for environmental injustice in Colorado, and has been for many, many years,” says Jeremy Nichols, climate and energy program director for WildEarth Guardians. “It's a polluter that we've worked to confront and try to shine a spotlight on over the years, in addition to a lot of other individuals, community members and organizations.”

One of the organizations WildEarth Guardians worked with on this lawsuit is GreenLatinos, which advocates for environmental issues across the country. Ean Thomas Tafoya, Colorado state director for GreenLatinos, grew up and works in Commerce City; he testified in the case.

“We’ve been involved with the Suncor work for a very long time, and when it came to filing a lawsuit, they were looking for people who had claims,” Tafoya says. “We’ve been saying for a long time we want to use every tool available to us for environmental justice.” The courts are one of those tools.

Under current state rules, Suncor is required to renew permits every five years. Suncor filed to renew the permits on one of its three plants in 2010 and the other two in 2016. The Air Pollution Control Division was supposed to reply within eighteen months. In February 2021, the division published a draft renewal permit for the 2010 application and conducted public hearings. According to the court order, that’s the extent of the agency’s action on the permits; it has yet to submit a response to those public comments to the EPA. It has taken no action on the renewal application submitted in 2016.

“They assert that the Suncor Refinery is the most complex industrial facility in Colorado and as such its operating permits are equally complex," the order says of the division's explanation. "They also assert that they have historically struggled to adequately staff the Title V permit program.”

According to Nichols, the fact that the division doesn’t have the staff to properly assess Suncor’s permits means it’s operating outside the bounds of federal law and can't protect the public. "It clearly shows that this isn't just an agency that is slow; they're illegally slow," he says.

Asked about the judge's order, Suncor responds: "Suncor Energy (U.S.A.) Inc. timely submitted its Title V renewal applications and has followed the requirements of the permit process. Changes to its Title V permits over time were submitted in accordance with CDPHE processes, separately and prior to permit renewal. 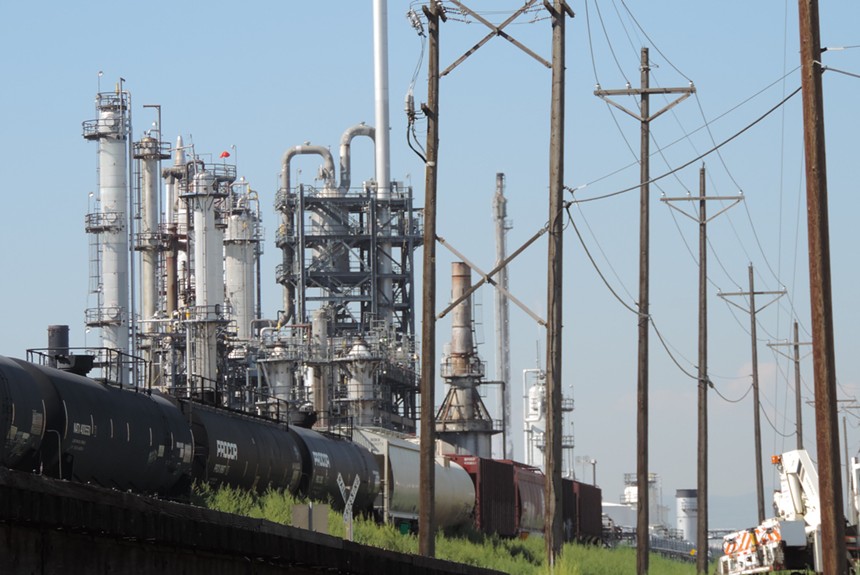 WildEarth Guardians has been keeping an eye on Suncor.
WildEarth Guardians / Flickr
“If regular people were out of compliance with their business licenses, with their plates for their cars, there would be accountability, and we haven’t seen that for major polluters for a long time,” adds Tafoya. "If you can't do business without harming people, you shouldn't be in business."

But things could be changing. Tafoya is a member of the new Environmental Justice Action Task Force, formed after the passage of House Bill 1266, a landmark environmental justice act, during the last legislative session. While that group's work is just starting, Tafoya commends CDPHE for creating a one-stop shop on its website for information related to Suncor.

And as part of the 2021 Suncor settlement with the state, Cultivando, a nonprofit based in Adams County, was given money to start an air quality monitoring program at the refinery, another step in protecting the neighboring community.

"We continue to make improvements to reduce the environmental impact of our operations and have voluntarily implemented an enhanced community air monitoring program to improve transparency and accessibility of air quality information for the community," Suncor notes. "Data from the Commerce City North Denver (CCND) Air Monitoring program’s first set of reports shows all measured compound concentrations are below acute health guideline values in all neighborhoods."

In response to questions about the judge's order, the Air Pollution Control Division highlights its work on that settlement and other efforts — such as requiring Suncor to fund additional hydrogen cyanide monitoring — to show that it is prioritizing public health near the refinery.

“Because we are still reviewing the judge’s ruling and determining next steps, we won’t be able to provide comment at this time,” a division spokesperson notes. “We have been working diligently to process Suncor’s permit applications, and will continue to do so. Our priority remains protecting public health and the environment around the refinery.”

The division did not give a timeline for responding to the order, and the judge didn't set a specific deadline. “We interpret ‘without further delay’ to mean this has to become the number-one priority within the Air Pollution Control Division; that other permitting activities need to be set aside for now so that they can focus on mounting the resources and staffing needed to get this done,” Nichols says.

To approve a permit, the Air Pollution Control Division must not only allow time for public comment, but must review that comment and share it with the EPA before making a decision. It must also assess whether a business can comply with clean-air laws and regulations. While that process takes time, Nichols says, it's reasonable to expect a decision on the permit renewals by the end of the year.

“Now is the time for the government to act," Tafoya concludes. "It would be another environmental injustice for them to delay any further."

This story was updated at 2 p.m. January 20 to include a response from Suncor.
KEEP WESTWORD FREE... Since we started Westword, it has been defined as the free, independent voice of Denver, and we'd like to keep it that way. With local media under siege, it's more important than ever for us to rally support behind funding our local journalism. You can help by participating in our "I Support" program, allowing us to keep offering readers access to our incisive coverage of local news, food and culture with no paywalls.
Make a one-time donation today for as little as $1.