Spring Is Coming, but Watch Out for Winter!

Time to watch out for winter again. Evan Semón
There's just one more day of winter, but the earliest start of spring in 124 years could bring with it a major dump of snow on Denver on March 19.

Which means it's time to pay attention to winter weather advisories and storm warnings as well as coronavirus alerts. Signs are already appearing on Colorado highways warning of a winter storm, even if it lands on the first day of spring.

Here's the word from the Colorado Department of Transportation website:

WINTER STORM WATCH WEDNESDAY P.M.-THURSDAY. National Weather Service has issued a Winter Storm Watch Wednesday afternoon through Thursday late in the day. Snow is expected to develop across the southwest mountains then move to the north and east. Heavy snow possible in areas such as Cameron and Berthoud Passes. Thursday, snow should move east across I-25 and to the northeast along I-76. Winds may create visibility and drifting issues in some plains areas east and northeast of Denver and along the construction area between Castle Rock and Colorado Springs.


Meteorology is a tough business, and while a majority of the time meteorologists get it right, sometimes they get it way wrong. But there are some constants, set criterion from the weather service for snowstorms, wind storms, severe storms and floods that local officials use to prepare the population for the impending weather.

For the mountains to see a Winter Weather Advisory, there needs to be an anticipated 4 to 8 inches of accumulation within a 12-hour period. The expected totals required in the mountains for an advisory are higher, because it takes more snow to cause big impacts there. This, in part, has to do with population. You may occasionally see an advisory posted for less than 4 to 8 inches of snow in the mountains; if so, it's because heavy winds are going to accompany the falling snow, which would reduce visibility on the roads greatly enough to warrant an advisory. At lower elevations, wind can also reduce the amount of snow required for a advisory.

A Winter Weather Advisory may be posted even when there is no snow expected: You may see an advisory when the winds are so high that snow is actually blowing around on the surface and causing reduced visibilities for travelers, or when water from rain, snow or sleet melts and then refreezes on roadways.

Freezing drizzle, sleet or any combination of mixed precipitation may warrant the issuance of a winter weather advisory as well.

Other kinds of advisories you may see are coming from the National Weather Service in Boulder: a dense fog advisory, a wind chill advisory, a frost advisory and a blowing dust advisory, which all have their own sets of criteria.

What's the difference between a watch and a warning? Think about baking: When you are preparing a cake, you gather all of the ingredients you need and prepare to cook your dessert. This is the equivalent of a Winter Storm Watch. When a Winter Storm Watch is issued, as one has been for the metro str, it means that all of the ingredients are in place to produce winter weather — so watch out.

When you stick your batter in the oven, or when your cake is done, that is the equivalent of a Warning. When a Winter Storm Warning is issued, it means that winter weather is very close to happening or is already here.

A watch will be issued when winter storm conditions are possible within the next three days, but certain specifics may remain unknown. A Winter Storm Warning is issued when heavy snow is occurring or will develop in the next 36 hours. The heavy snow may be accompanied by wind greater than 15 mph and blowing snow.

The National Weather Service's anticipated snow in Colorado.
Colorado Department of Transportation
Local municipalities all have plans for watches, warnings and advisories.

“When a warning [or advisory] is issued, we put together a slide briefing from the local products that National Weather Service provides and send it out to stakeholders with a detailed summary of what Summit County should expect," says Brian Bovaird, the director of emergency management in Summit County. "For certain warnings when there is no notice, such as a snow squall warning, a Wireless Emergency Alert is automatically sent out by National Weather Service, so much of my focus is on providing context and follow-up info related to that warning.”

Dan Frazen, the emergency manager for Greeley, says that his city handles snow events in a similar way: “We make sure the leadership in our Public Works Department/Street Division have the most up-to-date warnings so they can determine if they need to activate our City’s Snow and Ice Management Plan (e.g., plow drivers on 12-hour shifts for 24-hour coverage). This is usually all before and during the storm.... After the storm is not really a concern, unless it was a 'blizzaster' or 'bomb cyclone,' and we need to document the weather incident (damages, overtime, etc.) for the State of Colorado.”

A Winter Storm Watch is now in place for much of Colorado. Be careful out there.
KEEP WESTWORD FREE... Since we started Westword, it has been defined as the free, independent voice of Denver, and we'd like to keep it that way. With local media under siege, it's more important than ever for us to rally support behind funding our local journalism. You can help by participating in our "I Support" program, allowing us to keep offering readers access to our incisive coverage of local news, food and culture with no paywalls.
Make a one-time donation today for as little as $1. 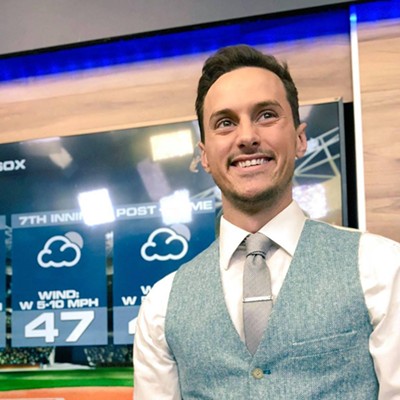 Andy Stein used to be a full-time broadcast meteorologist. Now he writes stories on a variety of topics ranging from meteorology to the ski industry to LGBTQIA+ topics and beyond, all while enjoying Colorado's amazing back yard. Every once in a while, you can still find him telling you the weather on Colorado Springs TV.
Contact: Andy Stein
Follow:
Facebook: Andy Stein
Twitter: @AndySteinWx
Instagram: @rain_or_shine_im_andy_stein/