Denver Streets Partnership
Denver is on a record-breaking streak, and it’s not a good thing.

In 2017, Denver leaders made a commitment to eliminating traffic fatalities and serious bodily injuries, an initiative known as Vision Zero, by 2030. Each year since, with the exception of 2020, Denver has been trending in the opposite direction. In 2022 alone, 82 people were killed on our streets in predictable, preventable traffic crashes, while 460 have been killed since Denver leaders made their Vision Zero commitment. That doesn’t indicate much of a commitment to me.

This is a public-health crisis, one of the many that Denverites are facing right now. While traffic safety is far from the only issue on which we need bold leadership, it is a critical one that intersects with other disparities in our community. Nationally, unhoused individuals, poor folks and people of color are overrepresented in the traffic fatality statistics.

I am calling on prospective city leaders — the 75-plus people who are in the running to be Denver’s next mayor and members of city council — to make a serious commitment to the transformational changes to our transportation system that are needed to save lives on our streets.

To the city’s credit, since committing to Vision Zero, it's built out some bikeways and bus lanes and made spot improvements on some of Denver’s deadliest streets, known as the High Injury Network — the 5 percent of the streets where 50 percent of the traffic fatalities occur, like Colfax and Federal. But the numbers show that’s not enough. Ultimately, if we want to eliminate traffic fatalities, we need to drastically reduce our dependence on driving as the primary form of transportation in Denver, and truly prioritize making other, safer ways of getting around easy and convenient.

While there are now funds dedicated specifically to Vision Zero and multimodal projects in Denver’s annual budget, the funding levels are still abysmally low relative to the scale of the problem. Perhaps even more troubling, projects that could improve safety and connectivity for people biking and walking have been repeatedly watered down or scrapped entirely because of complaints of parking loss or an increase in vehicle travel time of a minute or two. Furthermore, the city continues to push forward outdated, car-centric projects, like the Broadway and I-25 interchange, that are clearly no longer aligned with Denver’s safety and climate goals. It’s as if the current administration has expected platitudes and bare-minimum actions to have a significant impact on a crisis of this caliber. 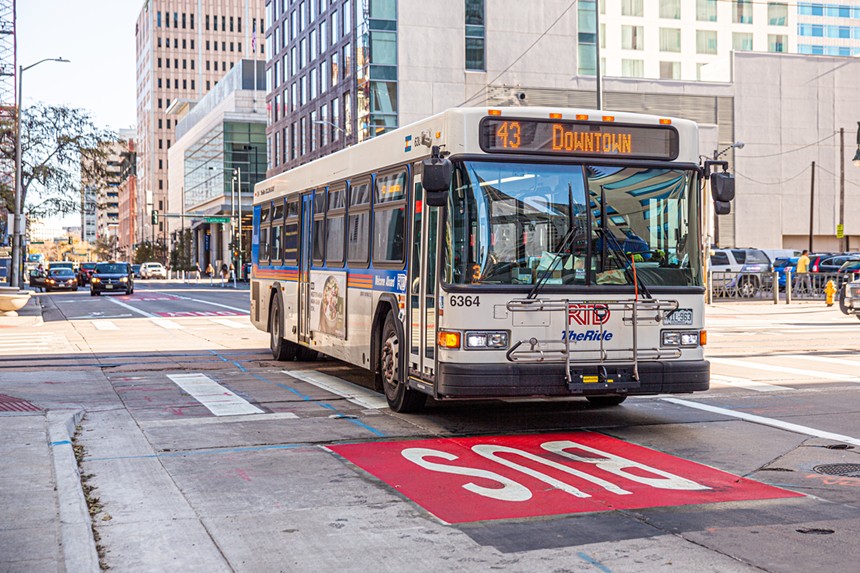 Denver Streets Partnership
At the heart of the transformational changes that are needed to achieve zero traffic deaths — and a strategy that has been mostly overlooked so far — is better bus service. Our main streets, many of which make up the High Injury Network, are designed like highways to move as many cars as quickly as possible, which makes them inherently dangerous and prone to crashes. Buses are a safer and more efficient way to move many people along these corridors. With better frequency, speed and reliability of bus service, more people will choose to ride the bus instead of drive, because they will actually have another option. The streets will be able to move more people to their destinations each day in a much safer manner compared to the status quo that is dominated by heavy car traffic.

Street design changes that would make bus service faster and more reliable would also help transform these corridors from dangerous highways into people-friendly main streets that generate more customers for local businesses and make them safer places to walk.

Denver can do better, and Denverites deserve better than the status quo.

To the candidates campaigning to be our next mayor and city council reps: Don’t just let “better than this” be your bar for leadership. Be bold and call for sweeping change that will save lives. Create a city that helps build community because neighbors can walk safely on our main streets, a city that is taking action to reduce greenhouse gas emissions, one that is working to reduce air pollution, and one that is creating access, not limiting it. We are all counting on you.

Molly McKinley is the policy director for the Denver Streets Partnership, a coalition of community organizations advocating for people-friendly streets in Denver.

Westword.com frequently publishes commentaries and essays on matters of interest to the Denver community; the opinions in them are those of the authors, not Westword. Have one you'd like to submit? Send it to [email protected], where you can also comment on this piece.