Cory Gardner Took $49.8K From Betsy DeVos and Family Before Confirming Her 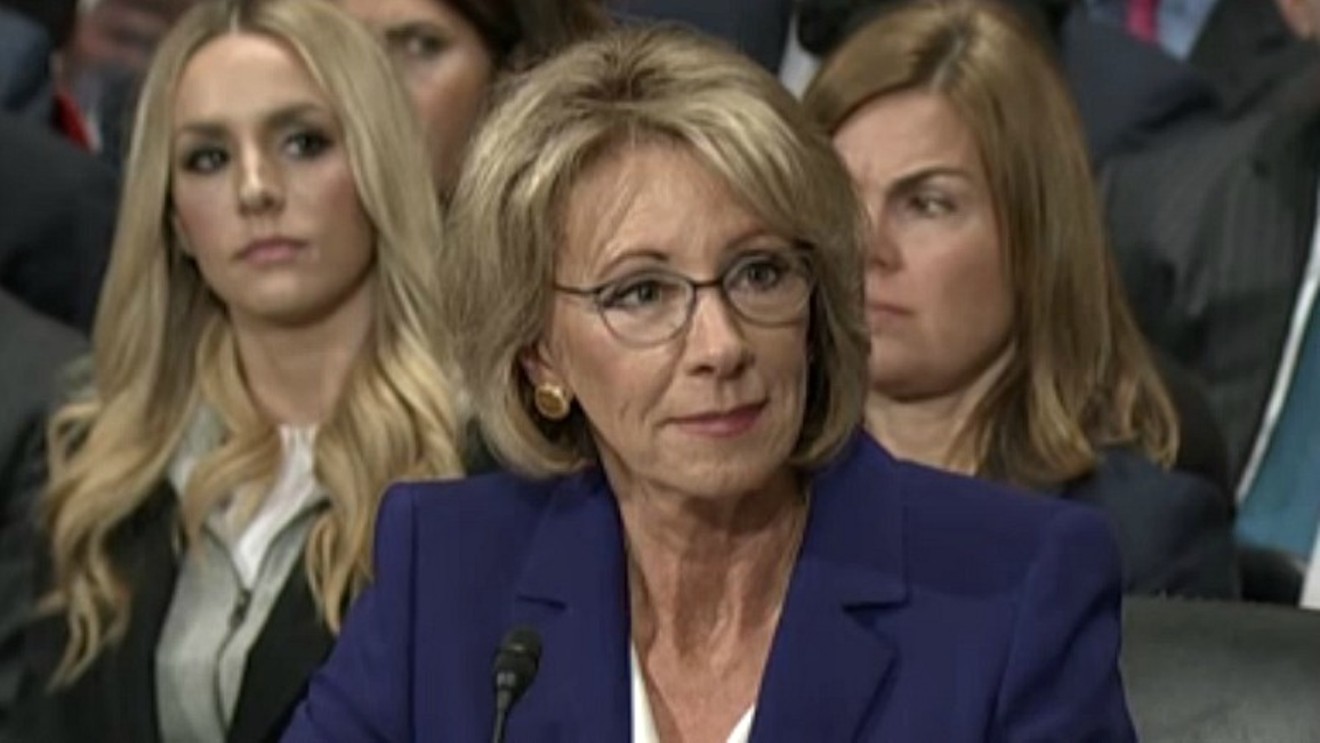 Betsy DeVos at a congressional hearing in regard to her nomination as Secretary of Education. YouTube
On Tuesday, February 7, Betsy DeVos, President Donald Trump's controversial pick to head the Department of Education, was confirmed by the U.S. Senate only after Vice President Mike Pence cast a tie-breaking vote. As such, every "yea" was key, including the one delivered by Colorado Republican Senator Cory Gardner of Colorado, a persistent cheerleader for the selection who just happens to have benefited from the newly minted secretary's largesse.

According to the Center for American Progress, Gardner has received $49,800 in donations from DeVos and her family.
He's not the only one. DeVos, a vocal booster of charter schools and vouchers whose critics see her as an enemy of public education, is a big donor to conservative politicians, as are members of her well-heeled family; she's married to the heir of the Amway fortune. CAP reveals that the DeVos clan has given nearly $1 million to senators in the 115th Congress between the years of 1980 and 2016.

Here's a CAP graphic with that information.

Center for American Progress
As you can see, the amount of the donations to Gardner is fairly standard — and around half as much as the $98,300 given to Florida Senator Marco Rubio, as was pointed out by our sister paper, the Miami New Times.

Colorado's other U.S. senator, Democrat Michael Bennet, the onetime superintendent of Denver Public Schools, stood in opposition to DeVos. On the Senate floor, he said, "In our nation, education is supposed to be at the heart of opportunity. But today, our education system fails far too many kids."

Bennet added: "I have no doubt that Betsy DeVos sincerely cares about children, and it is not her fault that President Trump nominated her. So, let me be clear, I am addressing the president, and not Mrs. DeVos, when I say this nomination is an insult to schoolchildren and their families, to teachers and principals, and to communities fighting to improve their public schools."

In contrast, Gardner talked up DeVos during appearances on CNN, as seen in this screen capture.... 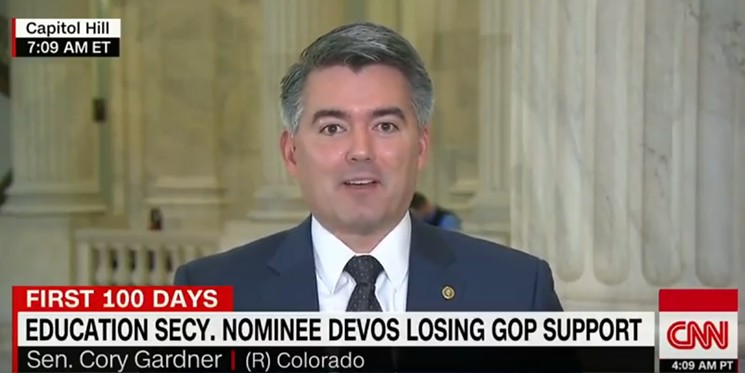 Senator Cory Gardner talking up the DeVos nomination on CNN.
CNN via YouTube
...and even released a video explaining the reasons for his support.

The clip is below, but here's the text from his remarks:


As a product of public schools myself and the father of one child — soon to be three — in the public school system, I believe it's important to have someone leading the Department of Education who will fight for public schools. When I had the opportunity to meet Betsy DeVos personally, she pledged to me that she would be an advocate for public schools, teachers and educational opportunities for all. The debate around her nomination has been a healthy exercise of our democracy, made all the more important because it involves our most precious possession: our children. As someone who believes that educational decisions should be left to parents and their children, with policies driven locally, Congress will hold her accountable, and I will work to insure that she lives up to the commitment that she made to me. The teachers in our lives play an outsize role as we grow into adults and throughout our adult life, and for good reason. They taught me that we must work together in common cause for a greater school, community and nation. I look forward to the great work ahead of us, not as parents divided, but as people committed in spite of these differences to building a stronger education for our children and grandchildren.

DeVos's confirmation is already being used by progressive politicians as a fundraising tool, with the House Majority Project sending out an e-mail blast seeking donations as a specific repudiation of this development.

Sounding a very different note was Ready Colorado, a self-described conservative education reform organization. A statement about the uproar over DeVos by the group's president, Luke Ragland, reads in part, "The debate about Betsy DeVos' qualification and readiness to serve as Secretary of Education has been a predictable, political disagreement in a city where most fights break along party lines. What has been truly jaw-dropping has been the utter contemptible silence of so-called moderate Democrats as unions have used the occasion of Betsy DeVos's nomination to savage parental choice, charter schools and school accountability. Has the influence of union money to the Democratic Party smothered the conscience of Democratic school reformers?"

We've reached out to Senator Gardner's office on the subject of the DeVos donation. When and if we receive a response, we'll update this post.