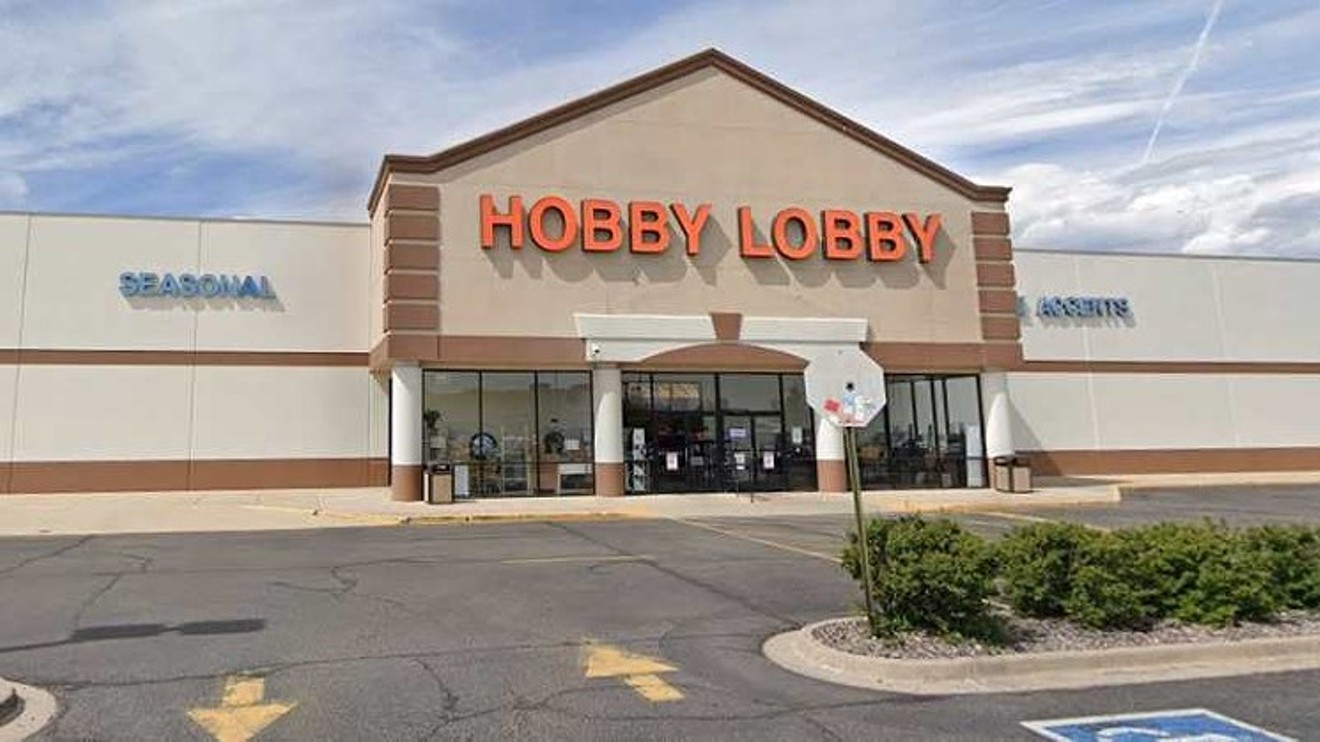 This Hobby Lobby in Littleton is not currently open for business, despite its CEO's wishes. Google Maps
As of today, April 7, the City and County of Denver officially has a longer stay-at-home order related to COVID-19 than does Colorado as a whole. Yesterday, Mayor Michael Hancock extended his order's expiration date to April 30, four days later than the April 26 provisional end point established by Governor Jared Polis that evening.

In addition, Denver is aggressively attempting to shutter non-critical businesses defying the edict, including various stores affiliated with Hobby Lobby, whose CEO, David Green, appears to have determined that God wanted him to continue operating despite the outbreak — until the office of Colorado Attorney General Phil Weiser sent him a cease-and-desist order.

In late March, Denver officials revealed the names of recalcitrant retail outlets they had contacted, including the Hobby Lobby at 920 South Monaco, two Appliance Factory concerns and a GameStop. But now there may simply be too many to list — and the number of Denver residents continuing to congregate at outdoor public places without face coverings recommended by both Polis and the federal Centers for Disease Control is plenty high, too.

In response to inquiries from Westword regarding retailer citations as well as ticketing of individuals by Denver police officers, the city's Joint Information Center combined the figures, confirming "6,090 contacts with businesses and residents about compliance with the stay-at-home order," "1,796 warnings issued" and "fourteen citations issued."

According to the Denver Emergency Operation Center's latest situation report, dated April 4, the enforcement protocol for businesses involves a warning on first contact, a citation the second time around, and the actual shuttering of the operation as a third strike. Thus far, only one unnamed Denver business has received multiple citations, and it was forcibly closed as a result.

The April 6 letter pushing the stay-at-home order to April 30 was signed by Robert McDonald, executive director of the Denver Department of Public Health and Environment. It notes: "Any person who fails to comply with this Order may also be subject to a civil penalty of up to nine hundred ninety-nine dollars ($999.00) per violation. Enforcement actions are intended to be cumulative in nature and Denver may pursue one or more civil, criminal, and administrative actions, fees, fines, sentences, penalties, judgments, and remedies and may do so simultaneously or in succession."

The aforementioned situation report lays out the rationale for the extension even as it offers stark evidence regarding Denver's shortage of personal protective equipment, or PPEs, needed by health-care workers tasked with treating the afflicted.

Here's a breakdown about key gear as of April 3:

Two of six Denver-area hospitals are expected to experience shortages of N95 masks, surgical masks, positive air-flow masks, gloves and gowns within the next week, and one of six predicts a shortfall of eye protection. However, none of the facilities foresees staff shortages within that span.

Denver officials have designated the Colorado Convention Center as a "Medical Surge facility under state direction," though the details have not been finalized. Once they are, crews will need two weeks or so to prepare the center for this use.

In the meantime, the population at the two main Denver jails is said to be at a historic low of under 1,200 inmates combined, and low-level offenders are not being taken into custody. Denver Public Schools is continuing to provide meals to "food-assistance-eligible youth for pick-up," but only lunch has been available since March 30. Existing night shelters for people experiencing homelessness were under capacity at the time the report was released, but not by much: 1,600 out of 1,750 beds available were occupied. And the Denver Coliseum is being prepped as a day/night shelter for women only, while the National Western Center's Hall of Education is being readied for men; its capacity is estimated at 1,100.

Click to read the Denver Emergency Operations Center situation report, the revised Denver Department of Public Health & Environment stay-at-home order, and the non-compliance letter sent to Hobby Lobby CEO David Green.
KEEP WESTWORD FREE... Since we started Westword, it has been defined as the free, independent voice of Denver, and we'd like to keep it that way. With local media under siege, it's more important than ever for us to rally support behind funding our local journalism. You can help by participating in our "I Support" program, allowing us to keep offering readers access to our incisive coverage of local news, food and culture with no paywalls.
Make a one-time donation today for as little as $1.