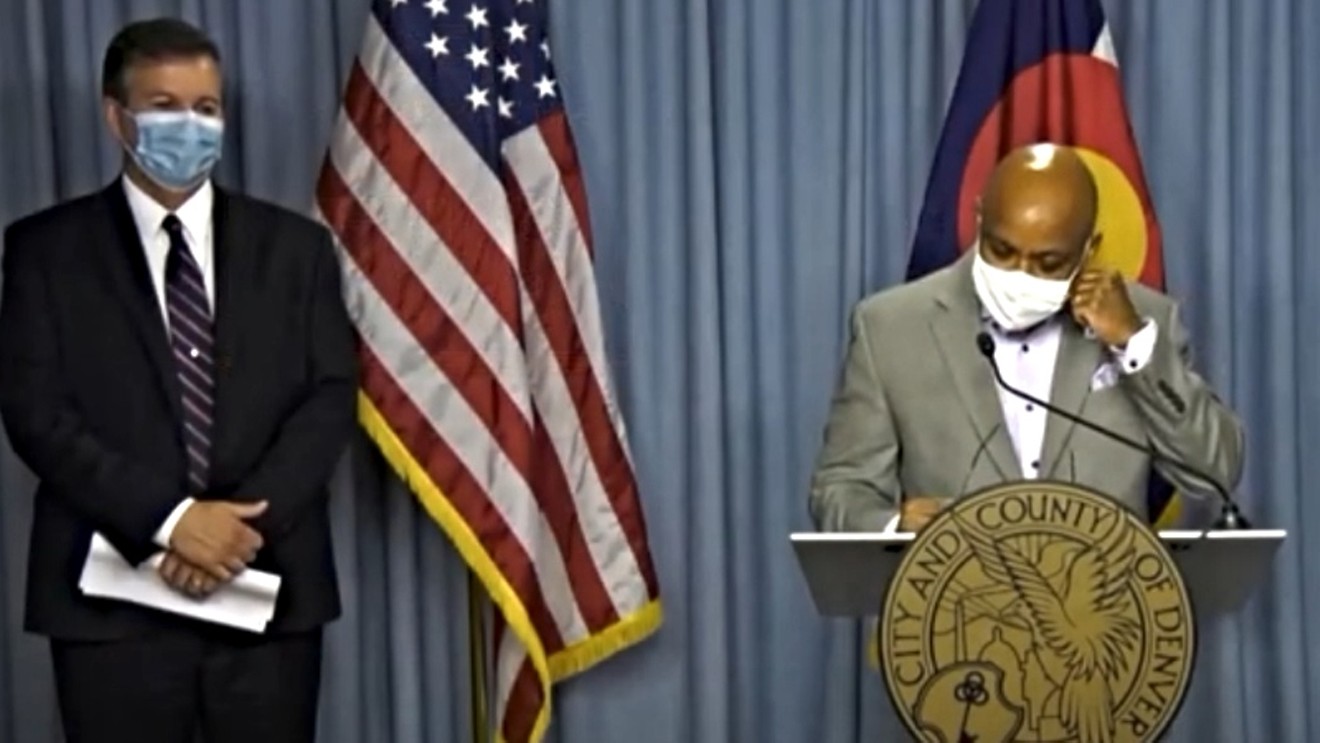 Denver Mayor Michael Hancock, joined by Denver Public Health and Environment Executive Director Bob McDonald, removing his mask prior to speaking at a press event on July 15. City of Denver via YouTube
Mayor Michael Hancock used to hold press conferences to discuss Denver's COVID-19 response every few weeks. So it's an indication of how seriously he takes rising case numbers and hospitalization rates in the Mile High that he met again with the media on July 15, just five days after his last appearance, to announce a pair of new policies intended to arrest the current trend.

Hancock revealed that Denver is pausing requests for variances on the state public-health order — exceptions to limits on the number of people that certain businesses can serve at any one time, for example, or the size of events. He also promised increased enforcement against those not wearing face coverings in public, as is the law in Denver, be they employees at businesses or their customers.

Joined by Bob McDonald, executive director of Denver Public Health and Environment, Hancock began his remarks by noting that "we continue to see a troubling increase in data — and it's data that will determine the decisions we may need to make going forward. It's not the type of spikes we're seeing in places like Miami and Houston, and we want to keep it that way."

According to Hancock, "our case numbers are up, our positivity rate is going up, hospitalizations are increasing."

Specifically, case rates on a seven-day running average have gone from 53.7 two weeks ago to 68.6, while the number of positive cases climbed from around 2.7 percent in June to between 4 and 5 percent. The number of people hospitalized with COVID-19 in Denver during June was 87 on average, while there were 140 as of July 15. The seven-day rolling average for ICU bed capacity, which was at 72 percent on July 10, the date of Hancock's last press conference, had risen to 79 percent in less than a week.

These factors contributed to Hancock's decision to "hit the pause button on our public-health variance requests to the state," he said.

Explained McDonald: "The state has a process in which municipalities can submit variance requests, varying from the governor's public-health orders. All those requests from various industries have to go through the local public-health department, to evaluate those variance requests. It has to be supported locally by us before we can advance it to the state."

For example, he continued, "we submitted a variance request to allow for hospitality [businesses] to have more people in their settings, to include expanding into outdoor settings. We requested a variance to have a higher allowance [of attendees] at the Denver Zoo and the Botanic Gardens." And while those variances aren't going to be immediately rescinded, additional requests won't be considered for the time being, much less forwarded to the state.

Here's a video of the entire press event:


Denver "isn't an island," Hancock emphasized. "We are part of a greater metro region," and communities that eschew masks endanger people everywhere that their unmasked residents go.

Hancock thanked Tri-County Health and Jefferson County Public Health for recently announced orders making face coverings in public settings mandatory, and encouraged any municipalities that haven't done so to follow suit, since infections can easily pass from one jurisdiction to another.

Denver has already made masks mandatory in most places, and those who leave their faces uncovered in settings where masks are required will face consequences, Hancock said: "If the public-health guidance I get from the Department of Public Health and other health officials and partners we call on for advice requires us to have tougher enforcement on face-covering orders, we will not hesitate to take such action. I've asked Bob McDonald and [City Attorney] Kristin Bronson to prepare for the eventuality for us to get tougher on enforcement. ... We will be visiting venues where coverings are mandated and will take enforcement actions where non-compliance is evident."

The fine for violating Denver's mask ordinance tops out at $999.

McDonald expanded on this warning. By his estimate, the DDPHE has received between 150 and 200 complaints per week about suspected violations of mask rules, and department personnel have followed up on all of them. But the department will get tougher, he said: "We will realign resources to add staff members to the compliance team. We will be more proactive. Where there's prevalence of non-compliance and they've been warned, we are going to take enforcement action."

He conceded, "This has been the most debated public-health order from the beginning, but the science is clear. Even if people aren't actively ill, it doesn't mean they don't have the virus, and it can be spread by people who are asymptomatic but not wearing a face covering."

The DDPHE already has what McDonald termed "a heavy compliance presence," he said, and "anyone who falls under [the mask] order at the individual or business level, if they've been warned before, is subject to enforcement," with a goal of lowering case and hospitalization numbers to the point where variances and other loosening of restrictions can be considered again.
KEEP WESTWORD FREE... Since we started Westword, it has been defined as the free, independent voice of Denver, and we'd like to keep it that way. With local media under siege, it's more important than ever for us to rally support behind funding our local journalism. You can help by participating in our "I Support" program, allowing us to keep offering readers access to our incisive coverage of local news, food and culture with no paywalls.
Make a one-time donation today for as little as $1.