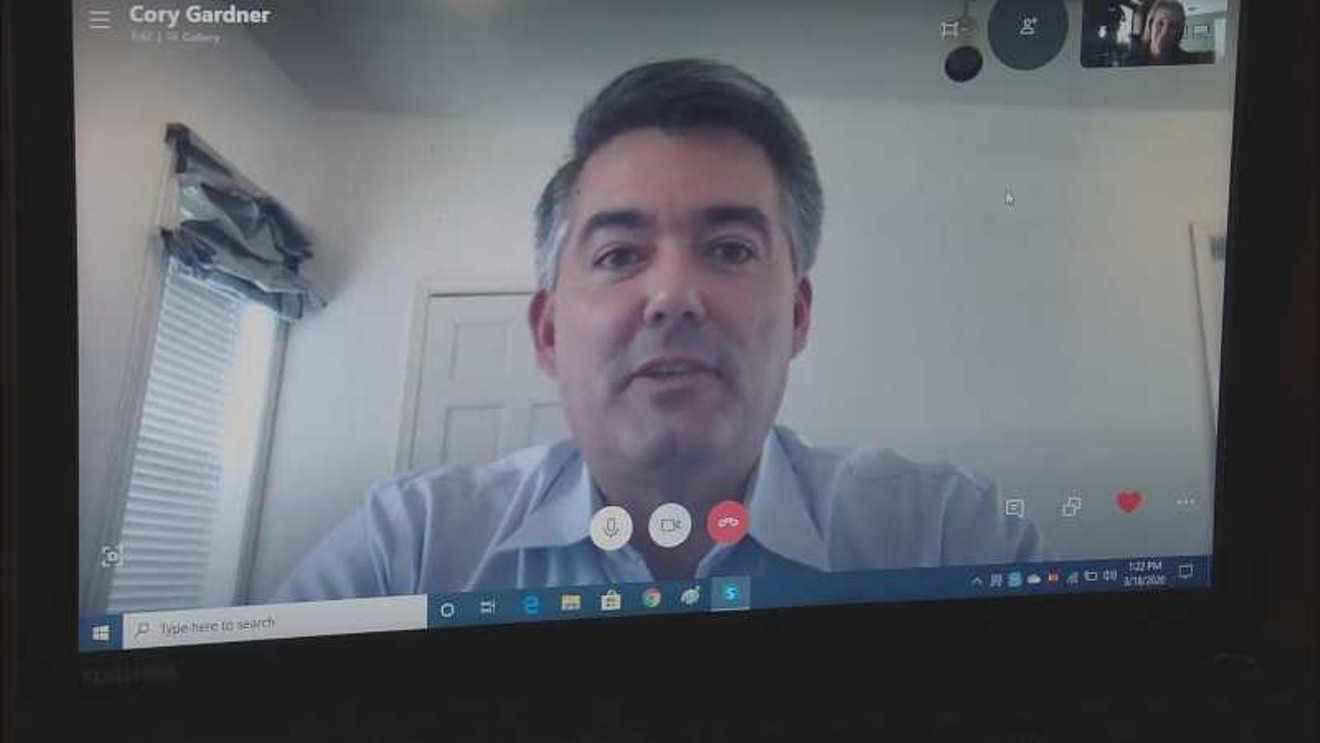 Senator Cory Gardner speaking to CBS4 while self-quarantining. CBS4
Cory Gardner, whom many political pundits consider the incumbent Republican senator most at risk of defeat in the 2020 election, has been personally impacted by COVID-19, entering self-quarantine after learning that a Coloradan who visited his Washington, D.C., office for a constituent meeting on March 11 tested positive for the virus. But he's not about to take any of the responsibility for what critics such as Governor Jared Polis characterize as a frustratingly slow federal response to the virus. Instead, he places the blame on Democrats' impeachment of President Donald Trump, who not long ago was calling concern over COVID-19 a hoax.

Gardner trotted out this argument on the local level during a Wednesday, March 18, conversation on the KNUS talk show hosted by Steffan Tubbs. Just over 29 minutes into the podcast version of the appearance, Tubbs said, "I guess the simplest way to ask this question is, 'It's non-political: Were we caught as a nation with our pants down when it comes to this type of issue?'"

"I think if you go back to when this first happened, when this first started, obviously we started getting reports toward the end of the new year — or, excuse me, toward the end of last year, right at the beginning of the new year," Gardner replied. "And I had initially heard these reports of this virus in China, and it was spreading outside of China. And I had said, 'We have to have a hearing. This sounds very serious. We have to have a hearing. We have to have a briefing.' And guess what was going on in the middle of all this? Impeachment was going on. And now, even in the middle of impeachment, we were able to get HHS [the U.S. Department of Health and Human Services] and FDA [U.S. Food and Drug Administration] and the NIH [National Institutes of Health] together to talk about what they had learned at that point, what they knew about it at that point. But Congress then went right back into the throes of impeachment."

Apparently, Gardner liked this line of reasoning so much that he revisited it while chatting with comedian Jimmy Failla, host of the Fox News program Fox Across America. Around 21 minutes into a podcast that can be accessed here, Failla said, "It fascinates me to think that Nancy Pelosi, the house speaker, and President Trump could sit in the same room and work together, because it was so nasty between the two."

To that, Gardner replied, "Well, you know, our parents taught us to turn the other cheek. And we have to do that and more at this time. And it is a challenge. You know, I remember going back to impeachment in January, when the first sort of word of coronavirus was starting to leak out and we knew that it was starting to spread. I had said, 'We need a hearing and we need a hearing now and we ought to delay' —...I think it was the last day of the closing arguments of the House. I think so, right around January 24, I think it would have been. I said, 'Look, we ought to, all of us, every single senator ought to be in a closed-door briefing with CDC [Centers for Disease Control], NIH, FDA about this new virus. We should do it now.' Instead of doing that, we got a briefing where, like, ten of us showed up, or maybe fewer. But everybody was focused on impeachment, and what a shame."

These days, there's more than enough shame to go around.
KEEP WESTWORD FREE... Since we started Westword, it has been defined as the free, independent voice of Denver, and we'd like to keep it that way. With local media under siege, it's more important than ever for us to rally support behind funding our local journalism. You can help by participating in our "I Support" program, allowing us to keep offering readers access to our incisive coverage of local news, food and culture with no paywalls.
Make a one-time donation today for as little as $1.