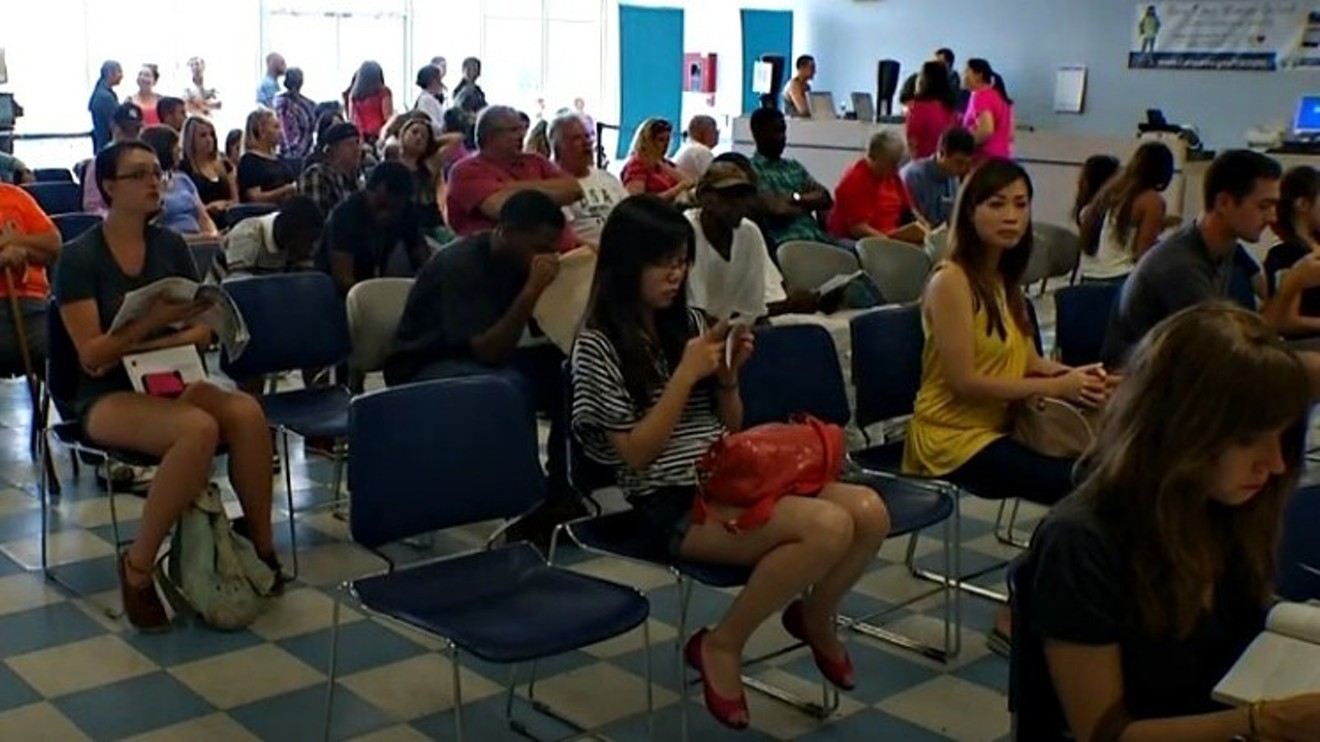 Your local DMV won't look like this again for a while. 9News file photo
Among the Colorado agencies most impacted by the stay-at-home order over COVID-19 was the Division of Motor Vehicles, and getting back up to speed now that the state is operating under Governor Jared Polis's safer-at-home program has been a struggle for at least 125,000 reasons.

According to DMV spokesperson Julie Brooks, that's the number of people the agency would have seen during the period when the offices were closed; in addition, the DMV had to cancel approximately 25,000 appointments. Leading up to the phased reopening of some DMV branches on May 4, officials made the decision to skip walk-ins and start with appointments only, and those wanting to schedule visits had to do so by phone, in an effort to prevent what Brooks describes as "appointment selling."

Predictably, "a high volume of calls" flooded in. "Even before we opened, we had 800 calls in the queue," she says.

The result was gridlock. An attempt to get through around noon yesterday, May 6, prompted an automated response recommending another try "during regular business hours." Meanwhile, although the DMV had re-launched its online scheduler, it wasn't working for much of that day. Through the afternoon, the system showed no dates or times available for the remainder of 2020. We finally got it to cooperate a little after 5 p.m.

The situation is likely to remain crazy for a while. By Brooks's estimate, about 75 percent of people contacting the division have been able to use the DMV website for purposes of license renewal and the like — though people whose licenses expired during the shutdown (like yours truly) will have to visit an office. Add the aforementioned 25,000 people whose previous appointments were wiped out by the pandemic response, and the backlog is big.

Appointment selling has only added to the headache. It became a thing after the passage of Senate Bill 251, also known as the Colorado Road and Community Safety Act, which authorized the issuance of Colorado driver licenses, instruction permits or ID cards "to those individuals who either cannot demonstrate lawful presence in the U.S. or can only demonstrate temporary lawful presence in the U.S."

"It was a population that could be taken advantage of," Brooks notes. "So what we had was somebody who would come in, grab a bunch of appointments and then say to people, 'If you want an appointment, you have to pay me $10.' It was an actual business of selling them. And when we open up more than 20,000 appointments, it's hard for us on the back end to necessarily catch someone before they get hold of 100 of them."

Folks who do manage to secure a DMV appointment to renew their license will notice some changes. For instance, eye tests will be done with an old-fashioned chart, as opposed to a high-tech machine, in order to enhance social distancing. Additionally, attendees must wear masks — except when their photo is taken.

To work through the backlog, some DMV offices are offering extended and weekend hours; details can be found on the myDMV website.

"People think we've just been sitting around for seven weeks, but I can assure you that's not the case," Brooks says. "And now we're dealing with 100,000 or 150,000 people wanting to get into an office, and everybody wants to do it this week."

Better get in line.
KEEP WESTWORD FREE... Since we started Westword, it has been defined as the free, independent voice of Denver, and we'd like to keep it that way. With local media under siege, it's more important than ever for us to rally support behind funding our local journalism. You can help by participating in our "I Support" program, allowing us to keep offering readers access to our incisive coverage of local news, food and culture with no paywalls.
Make a one-time donation today for as little as $1.