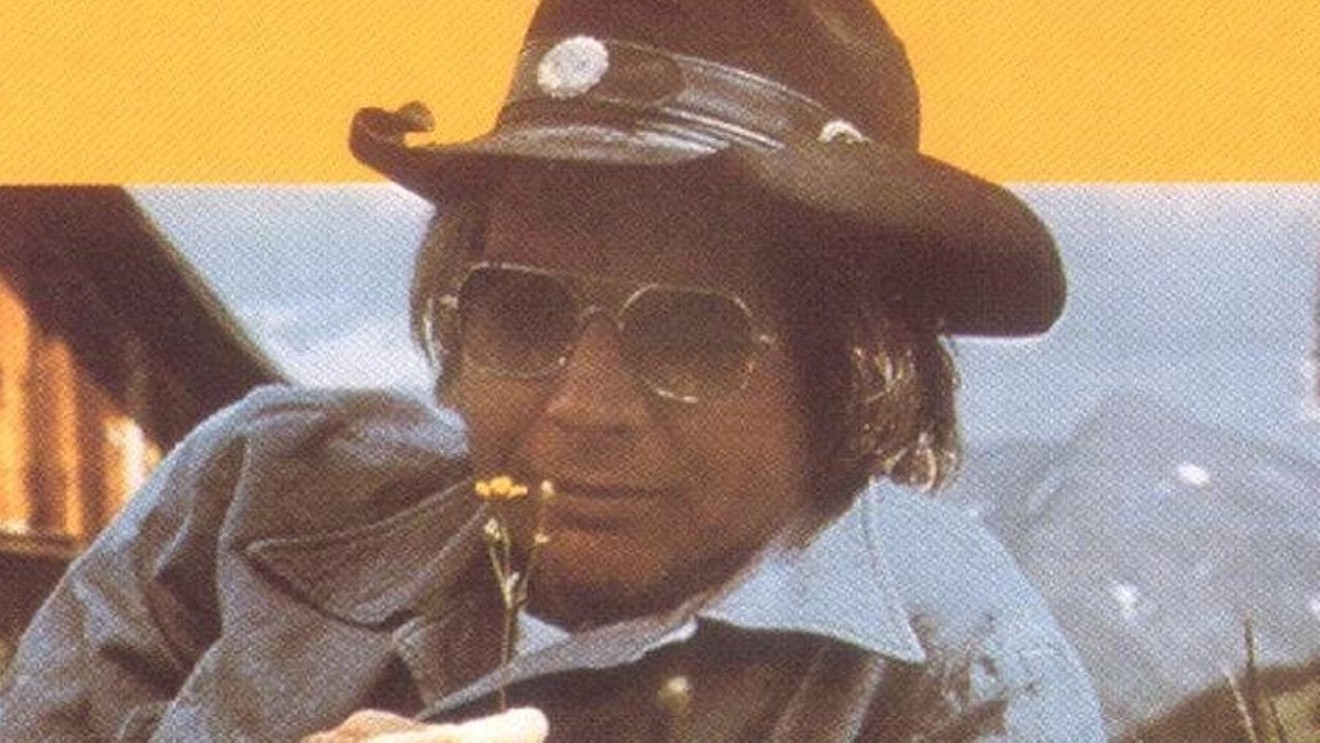 Bill Fries as seen on the cover of C.W. McCall's Greatest Hits. amazon.com
In the days after Bill Fries, better known by his stage name, C.W. McCall, died on April 1 at the age of 93, a number of national news organizations took notice, including the New York Times. But few Colorado media outlets shared word of his passing, even though the man who created "Convoy," an oddball hit in the ’70s that was recently embraced as a theme song by Canadian truckers protesting vaccine mandates, served an extended stint as mayor of Ouray, where he resided until his death.

Maybe that's because plenty of folks thought that Fries had already gone to his final reward.

In June 2010, Westword published an item about the Denver Post having to correct a report about Ride the Rockies cycling accidents near Wolf Creek Pass, which had provided the name for one of McCall's minor follow-up hits. "Three other riders went down about a half hour later during the descent from the pass that the late singer C.W. McCall immortalized as '37 miles o' hell," the Post piece claimed.The next day, the Post conceded that "because of a reporter's error, a story on Page 2B on Saturday incorrectly indicated singer C.W. McCall's status. He is living in Ouray."

According to the portrait presented by Billboard, Fries hailed from Audubon, Iowa, and made his first mark as a creative director for the Omaha-based advertising agency Bozell & Jacobs, where he won a Clio — the Oscar of the ad industry — for a television campaign touting Old Home Bread:
Weird connection: Fries wrote the Old Home Bread jingle with Chip Davis, a Bozell co-worker who went on to fame of his own with the group Mannheim Steamroller.

The popularity of the bread commercials convinced MGM Records to ink Fries, who soon came up with "Convoy," which popularized CB radios by way of lyrics filled with trucker jargon: "Ah, breaker one-nine, this here’s the Rubber Duck/You gotta copy on me, Pig Pen, c’mon?/Ah, yeah, 10-4, Pig Pen, fer shure, fer shure/By golly, it’s clean clear to Flag Town, c’mon/Yeah, that’s a big 10-4 there, Pig Pen/Yeah, we definitely got the front door, good buddy/Mercy sakes alive, looks like we got us a convoy."

The tune sounded like nothing else on the radio, and it soon took over the medium, topping both the pop and country charts in the middle of the ’70s. Here's a clip of Fries performing the ditty on The Mike Douglas Show in 1976:
The momentum generated by "Convoy" was so strong that it generated a crazily misbegotten 1978 movie of the same name starring Kris Kristofferson and Ali McGraw and directed by Wild Bunch legend Sam Peckinpah. Fries, meanwhile, managed to milk his popularity as a performer for several more years, by way of Billboard-cited ditties such as "There Won't Be No Country Music (There Won't Be No Rock ’n' Roll," "Roses for Mama," "Four Wheel Cowboy" and "Outlaws and Lone Star Beer," which was issued in 1978, when the C.W. McCall fan website's chronology says he retired from music.

The next year, 1979, Fries and his wife, Rena Jayne, immortalized as "R.J." in the track "Black Bear Road," relocated to Ouray. In November 1985, he was elected mayor of the beautiful mountain town. He served in this role from 1986 until 1992, and in a remembrance published by The Fence Post, which describes itself as "a nationwide agricultural newspaper" founded in Bellvue, Colorado, in 1980, his biggest accomplishment in office was raising money to rebuild the community's historic city hall, which had burned down way back in 1950.

Fries remained in Ouray after he left office, and while he made occasional public appearances, he was largely out of the public eye until his biggest smash was repurposed for the Canadian trucker demonstrations, whose participants called their events "Freedom Convoys." The titular hosts of The Drew & Mike Show, a longtime staple of Detroit radio, tracked him down on February 9, and he revealed that he was suffering from cancer and had been moved to a hospice in Montrose. During the conversation, which begins at around the 41-minute mark of the Drew & Mike podcast (access it here), Fries seemed pleased that "Convoy" was getting attention again, but also revealed that he'd been vaccinated. In addition, he made a point of mentioning that he and R.J. would celebrate their seventieth wedding anniversary on Valentine's Day.

That's a big 10-4, good buddy.
KEEP WESTWORD FREE... Since we started Westword, it has been defined as the free, independent voice of Denver, and we'd like to keep it that way. With local media under siege, it's more important than ever for us to rally support behind funding our local journalism. You can help by participating in our "I Support" program, allowing us to keep offering readers access to our incisive coverage of local news, food and culture with no paywalls.
Make a one-time donation today for as little as $1.