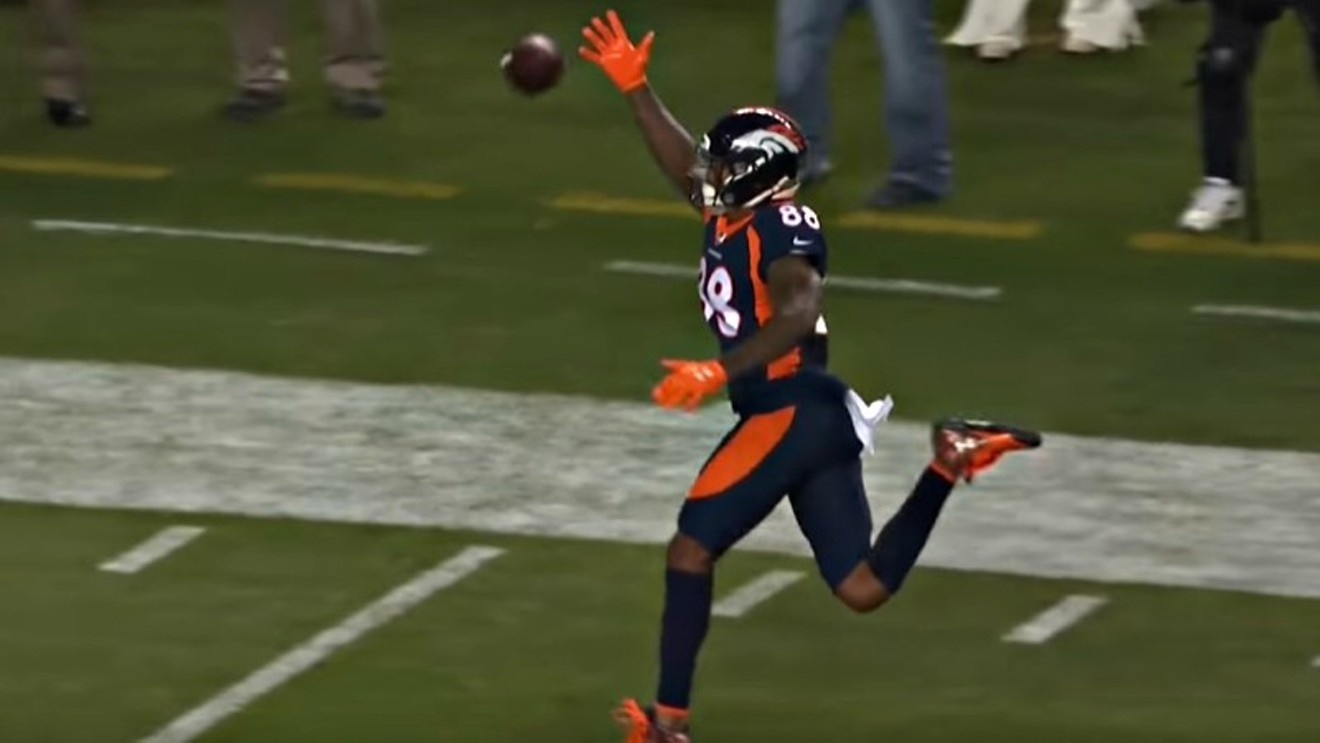 A familiar image for Broncos fans: Demaryius Thomas streaking down the sidelines clad in blue and orange. NFL via YouTube
Demaryius Thomas, one of the best receivers in the history of the Denver Broncos, has died at age 33, less than six months after the June 28 announcement of his retirement from professional football.

A statement issued by the franchise shortly after midnight undoubtedly reflects the feelings of fans in Colorado and across the country: "We are devastated and completely heartbroken."

CNN reports that Thomas was found dead at his home in Roswell, Georgia, on December 9. Officer Tim Lupo of the Roswell Police Department told the network that the death appears to have "stemmed from a medical issue."

Thomas's rough upbringing became known across the country in 2016, when his mother, Katina Smith, got her first opportunity to see her son play in the NFL thanks to the commutation of her prison sentence by President Barack Obama. Smith had been convicted in connection with a cocaine ring headed up by Minnie Pearl Thomas — her mother, and Demaryius's grandmother.

In a 2013 interview with Fox31, Thomas joined his mother and grandmother, who participated by phone, to talk about those years.  He noted that he was just twelve when Katina and Minnie went to prison. "I was not actually selling drugs," Katina maintained. "The DA wanted me to testify against my mother and said if I didn't testify against my mother, I'd get charged with the whole conspiracy."

Despite Katina's decision not to roll over on her mom, Minnie still got the tougher jolt. While both women were sentenced to life in prison, Katina was offered a chance of parole after twenty years; Minnie's first opportunity for release won't come until forty years have passed — although good behavior and other considerations may lower that number.

"I didn’t even talk to my mom or grandma until my junior or senior year," Thomas recalled in that Fox31 interview. "I couldn’t call them. I wasn’t driving, so I couldn’t go see them."

As the years went on, Thomas attended Georgia Tech, where his skills quickly attracted the attention of NFL scouts. The Broncos drafted him with the 22nd overall pick in the 2010 NFL draft, and he quickly began to put up big numbers. He earned folk-hero status when he was on the other end of the most famous pass thrown by Tim Tebow during his time with the team — an eighty-yard bomb on the first play of overtime in a January 8, 2012, Wild Card playoff victory against the Pittsburgh Steelers.

Things got easier for Thomas after Peyton Manning came to town just months later, and he was richly rewarded from a monetary standpoint, signing a five-year, $70 million contract in 2015. But as the years went on, his occasional drops seemed to get more attention than his touchdowns, and in October 2018, with his skills deteriorating and the Broncos going nowhere, he was traded to the Houston Texans.

His tenure in Houston had an unhappy ending. He tore his Achilles in December of that year, and the Texans released him in February 2019, shortly before he was arrested in Colorado for vehicular assault. (He ultimately pleaded guilty to careless driving; the more serious charges were dropped.)

The New England Patriots subsequently picked up Thomas, but he was cut before the 2019 season began, and after a brief stint with the New York Jets, his playing career was over.

After his retirement, he stayed in touch with his former Broncos teammates, as related by Manning in brief remarks shared by the team. "D.T. was a better person than he was a player, and he was a Hall of Fame player," Manning said. "That tells you how good of a person he was. He treated my kids like they were his own. He was there for every teammate’s charity event.... I texted with D.T. on Tuesday. He was talking about a TD audible we called vs. Arizona in 2014. Absolutely devastated."


We are devastated and completely heartbroken.

Demaryius' humility, warmth, kindness and infectious smile will always be remembered by those who knew him and loved him. pic.twitter.com/0GLZIr6UP3