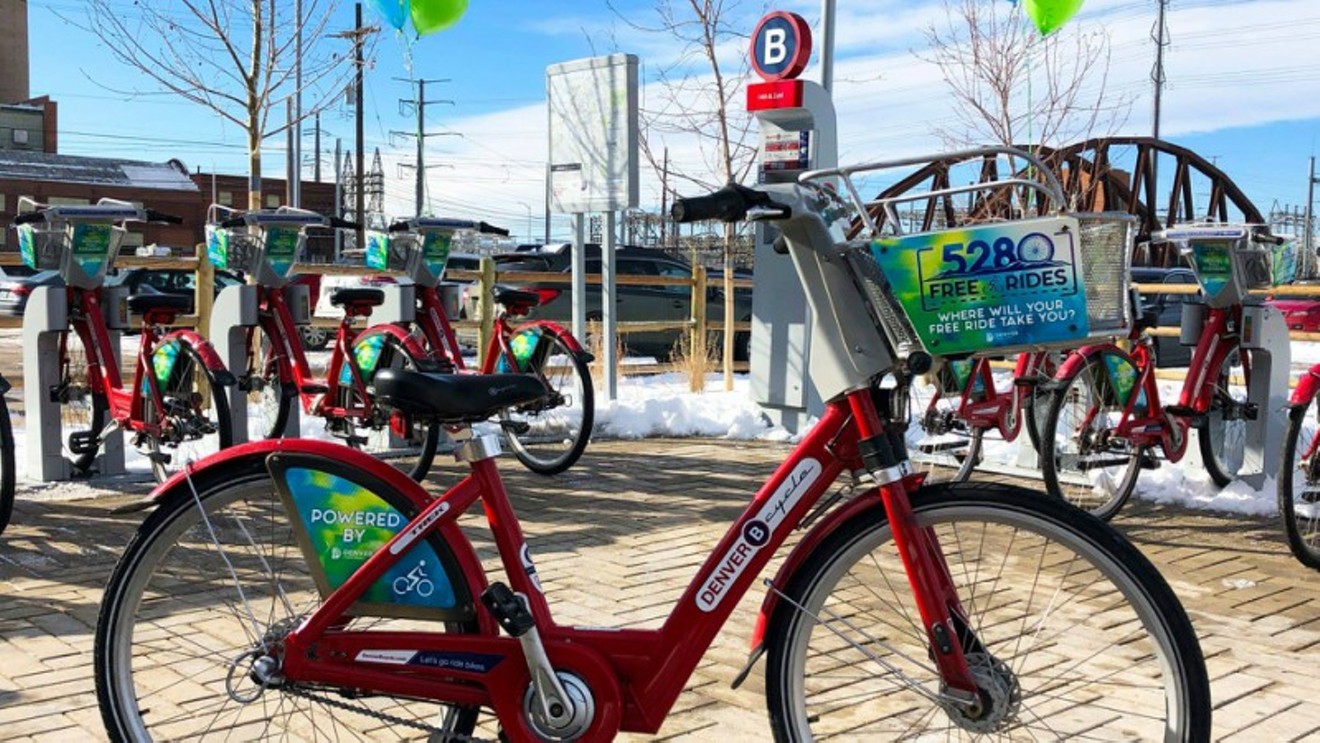 Denver B-cycle's 5280 Free Rides program will expire the same time as its contract: January 30, 2020. Denver B-Cycle
Today, November 21, Denver Bike Sharing announced that its relationship with B-cycle, the vendor with which the nonprofit has worked to provide for-rent bicycles in the city since April 2010, will end on January 30, 2020, when the current contract expires. Denver Public Works is now in the process of looking for a new company to operate bike and scooter services through a competitive bidding process that isn't expected to be completed until the middle of next year. That means months are likely to pass between the end of B-cycle availability and the debut of a new system.

"It hurts us to know that we're going to have this gap in service," says Mike Pletsch, Denver Bike Sharing's executive director about the development, which was first reported by Denverite. "That's why we're very hopeful that the process for the city of Denver can move quickly."

In September, when we spoke to Pletsch about an e-cycle pilot program involving Toronto-based Drop Mobility, he conceded that "in the last few years, we've started to see a decline in ridership, and a lot of that was in the same time period as when folks started to have more options out there: car share, ride hailing, expanded train services from RTD."

Statistics from the 2018 Denver B-cycle annual report bear out this observation. The number of annual memberships, listed at 2,171, is just over half the 4,023 in the peak year of 2013, and total trips by all available membership types dipped 11 percent from 2017 to 2018, despite being approximately three times larger than during Denver B-cycle's first twelve months.

Meanwhile, Denver has seen an explosion in the use of e-scooters, and during a recent conversation with Westword, Patrick Quintana, market manager for Lyft in Colorado, made it clear that the company would love to add bicycles to its local menu. In his words, "We would definitely be interested in bringing bike share to Denver in a more robust fashion — working with the city to expand the footprint and the number of docks. We're a scooter business in Denver right now, but we'll continue to have discussions whenever they're available in the hope that at some point, we can bring our bike-share here, too."

At the same time, the B-cycle fleet had grown long in the tooth, Pletsch acknowledges: "A lot of the equipment we have in the field has been out there for a very long time. The system is aging, and it needs to be replaced — and as the local nonprofit, we just don't have the funds at the moment to replace our entire system with our current vendor."

Pletsch stresses that "when we launched the Denver B-cycle system, B-cycle was top-of-the-line technology. But as we approach 2020, it's time to take a look at the latest in innovations and advancements in technology that have occurred over the past ten years." 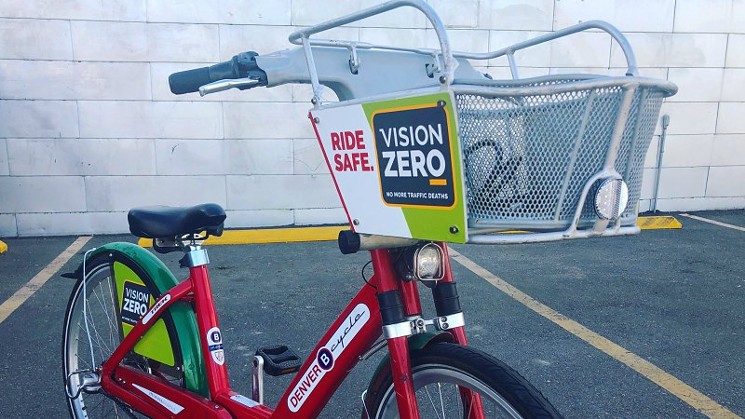 Denver B-cycle promotes its service as being environmentally friendly.
Denver B-Cycle
That might include moving from a dock-based bike-share setup to a dockless version "that would insure the public right-of-way is being used in the best way for everyone, free of clutter under ADA [Americans With Disabilities Act] regulations, so it would allow people to move around better," he notes. "There have been a lot of advancements over the past ten years, and Denver has done a good job of keeping up with them. Denver B-cycle was the first large-scale bike-share system in the country, and Denver has been on the cutting edge of providing residents and tourists with a variety of mobility modes. So this is the city continuing to ensure that the community has the best available options."

In a release, Denver Public Works maintains that issuing a Request for Proposals (RFP) with a goal of finding a company to manage both shared bikes and scooters will help the city "better manage and coordinate the delivery of these commercial operations and help ensure the city partners with the most qualified operator(s) to further its mobility goals." DPW adds that "scooter and e-bike companies currently permitted to operate in Denver will continue to operate through Denver’s Dockless Mobility Pilot Permit Program until the city’s contracted vendor(s) begin operating, which is anticipated in summer 2020. The RFP is being finalized and is expected to be released at the end of January 2020," right around the time the B-cycle contract concludes.

Until then, residents who received a free bike pass through the 5280 Free Rides Program will still be able to use it. But after January 30, B-cycle will be no more.

As for Denver Bike Sharing, it plans to bid for the right to run the B-cycle sequel — and in a release of its own, Denver Streets Partnership says that the program has been a success despite its impending end. Between April 2010 and December 31, 2018, the organization points out, there have been 500,437 total memberships, 2,519,553 rides taken and 5,348,388 miles ridden. That averages out to more than 1,000 trips per day. Approximately 41 percent of Denver B-cycle trips replaced jaunts that otherwise would have involved motor vehicles, and 28 percent were paired with transit, further reducing carbon dioxide emissions.

"I don't want to say we're excited about the RFP," Pletsch admits, "but we're very hopeful and supportive of it. We think it's the right move for the city of Denver, and we want to continue to serve the community — and we know there are opportunities out there for partnerships with other vendors that would allow us to do that on a greater scale."

Still, Pletsch acknowledges that "with the contract ending, the timing didn't allow for a very smooth transition, and we're very distraught to be creating this gap in service. This time of year, with the weather the way it is in Denver, it's going to have the least amount of impact on folks, but we know there's still going to be an impact, and we're very sorry for our riders. We've got some folks who've been riding with us since the very beginning."
KEEP WESTWORD FREE... Since we started Westword, it has been defined as the free, independent voice of Denver, and we'd like to keep it that way. With local media under siege, it's more important than ever for us to rally support behind funding our local journalism. You can help by participating in our "I Support" program, allowing us to keep offering readers access to our incisive coverage of local news, food and culture with no paywalls.
Make a one-time donation today for as little as $1.